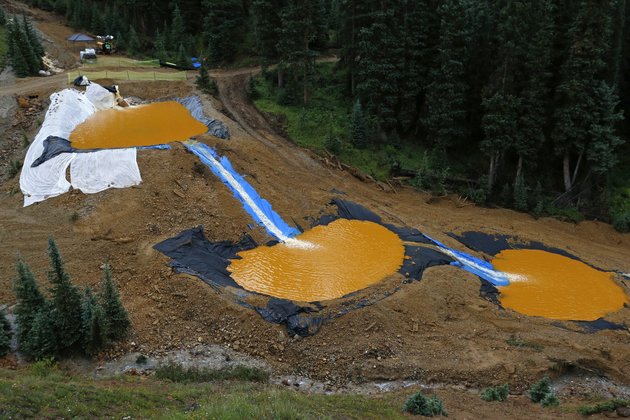 Note from Storm: The normal business model for mining companies in the U.S. and elsewhere is to get free (or dirt cheap) access to publicly-owned land, extract the value, and declare bankruptcy when people start talking about cleaning-up the toxic mess left behind. U.S. laws supporting this model were written by mining company lobbyists and corrupt politicians in 1872, and remain on the books due to the efforts of their modern-day counterparts. The irony is that the mining company owners consider themselves capitalists, even though they rely on the public to pay their liabilities. That’s the bad news.

The good news is that these old mines WILL get cleaned up, and the solution will most likely involve (real) capitalism. This is what I’ve been writing and talking about ever since my first book, The Restoration Economy, was published in 2002. Hopefully, the companies that evolve will be more competent than the one that EPA hired, and that caused the infamous spill that turned Colorado’s Animas River into the Yellow River. This following article says the national cleanup totals $54 billion (I cite the high end, due to the follow-up ecological restoration needed). That doesn’t include coal mines. When those are factored in, we’re easily talking about well over $100 billion

From the article: It will take many years and many millions of dollars simply to manage and not even remove the toxic wastewater from an abandoned mine that unleashed a 100-mile-long torrent of heavy metals into Western rivers, experts said Thursday.

Plugging Colorado’s Gold King Mine could simply lead to an eventual explosion of poisonous water elsewhere, so the safest solution, they say, would be to install a treatment plant that would indefinitely clean the water from Gold King and three other nearby mines. It would cost millions of dollars, and do nothing to contain the thousands of other toxic streams that are a permanent legacy of mining across the nation.

The Gold King delay illustrates a problem dwarfing the 3 million-gallon waste plume accidentally released by contractors working for the U.S. Environmental Protection Agency: There are about 500,000 abandoned mines nationwide, and only a fraction have been dealt with, despite decades of effort.

EPA has estimated the cost of cleaning up abandoned mines nationwide, not including coal mines, at between $20 billion and $54 billion.

In Colorado alone, there are hundreds, possibly thousands of abandoned mines discharging acid rock drainage, Jamison said. The potent stew of heavy metals accumulates as chemical reactions brew up sulfuric acid at concentrations high enough to dissolve steel, and leach poisons down mountainsides and into groundwater decades after mines close.