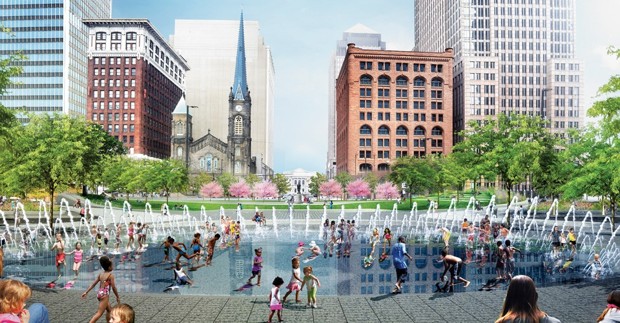 Note from Storm: Cleveland, Ohio is transforming a large downtown traffic circle into a public park, in the latest example of a city that has realized the revitalizing power of pedestrians. They’ve enlisted the help of famed landscape architect James Corner, who designed New York City’s spectacularly-successful High Line Park, to revive their own urban park. What is now a disruptive traffic circle used to be a green public amenity. Now, it will be again.

From the article: To hear Clevelanders talk, Public Square is a place you pass through to reach somewhere else. When Moses Cleaveland laid out the town in 1796, he imagined the open area at its center as a New England-style commons: a gathering space for settlers, a grazing area for livestock.

But its natural position as a transit hub—first for stagecoaches and streetcars, later for buses and automobiles—steadily intruded on that civic purpose. Despite efforts by some residents to preserve it as a park, including a decade-long stretch in the 19th century when it was fenced off to horse-drawn wagons, roads and traffic triumphed over people and place.

“Over the years, it just turned into more like a series of big traffic islands,” says the landscape architect James Corner. Two major streets, Superior and Ontario, bisect Public Square, creating four discrete squarelets. Locals who find themselves in one of the quadrants have a tough time getting to another. If the cars aren’t enough of a hindrance, the lack of things to do or see in the area is: of the square’s 10 acres, more than six are paved over with concrete or asphalt.

Now, with the square’s original communal spirit greatly diminished, Cleveland has asked Corner—a revivalist with what he calls a “theatrical flair”—to help bring it back.

Few people have done more in recent years to breathe life into America’s dead or dying public spaces. Best known for designing the High Line in New York, Corner has been called a landscape “rock star” and mentioned as a modern successor to Frederick Law Olmsted, the visionary behind Central Park.