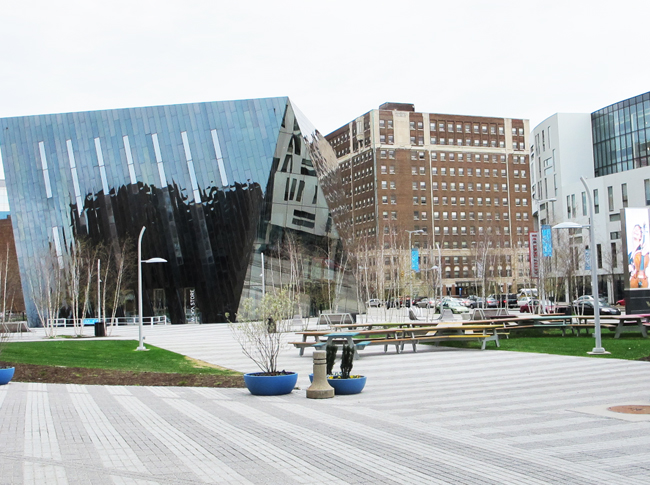 Located at a convergence of neighborhoods three miles south of downtown Cleveland, Ohio, Uptown District is the redevelopment of a corridor that links surrounding neighborhoods with art, educational, and healthcare institutions, producing outdoor gathering spaces, retail shops and restaurants, student and market-rate housing, and public transit connections in the process.

This redevelopment has transformed two city blocks of Euclid Avenue between two of the city’s leading cultural institutions that were a no man’s land of vacant and underused properties into a community gateway and destination.

Envisioned as an arts and entertainment area, a key goal of the project was to create “connective tissue” that linked its cultural institutions with downtown Cleveland and adjoining communities.

The more than $150 million project was constructed in two phases, the last of which was completed in 2014. Financing was provided by the Cleveland Foundation, New Market Tax Credits, and the City of Cleveland.

Transportation to the development was enhanced by investments in two new Cleveland Regional Transit Authority rail stations at the edges of the district and the popular HealthLine bus-rapid transit system on Euclid Avenue that connects Uptown with downtown and East Cleveland.