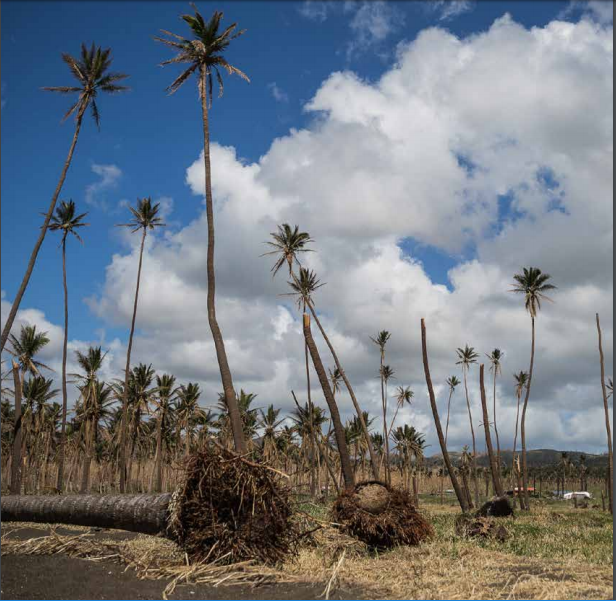 The report, prepared by the Global Facility for Disaster Reduction and Recovery (GFDRR), the World Bank, and the Organization for Economic Cooperation and Development (OECD), shows that more than 335 major natural disasters have occurred in Small Island Developing States (SIDS) since 2000, resulting in an estimated US$22.7 billion in direct damages. Yet, efforts to build resilience to climate change and disasters are being hampered by a highly complex web of global financing, creating acute fragmentation.

The result is often a confusing array of dozens of small projects – half of which are below $200,000 each and collectively account for only 2 percent of all support – creating large inefficiencies and a lack of broad impact. The report also found that while SIDS received US$783 million a year in climate and disaster resilience financing during 2011-2014, the proportion of grant financing has been declining.

“When a single extreme weather event can cause losses that exceed a small island country’s GDP by several times, governments need a more comprehensive approach to manage risk effectively,” said John Roome, Senior Director of the Climate Change Group at the World Bank. “We are working with our partners to ensure that Small Island Developing States have the tools they need to protect both their citizens and their economies, and are able to channel incoming financing where it is most needed.”

“Sustaining development progress in the midst of an increasingly volatile climate is no easy task, especially for communities within SIDS,” says Jorge Moreira da Silva, OECD Development Director. “However, with greater international cooperation and by harnessing emerging financial innovations, governments and donors can steer vital financing to build lasting resilience for these countries, and create a safer and more prosperous future.”

The report calls for more coordinated, predictable and long-term financing for climate and disaster risk that is tailored to the needs of small islands. It also advocates for strengthened enabling policies and institutions in SIDS to ensure funds for managing climate risk are used more effectively.

Natural disasters and climate change severely affect the growth trajectory of SIDS1 and their ability to achieve sustainable development. SIDS are located in some of the most disaster-prone regions in the world and comprise two-thirds of countries with the highest relative annual losses due to disasters. With the effects of climate change compounding the intensity of these disasters, this trend is set to continue, creating new developmental challenges for SIDS. Natural disasters and climate variability severely impact major economic sectors in SIDS, hinder economic growth and affect the most vulnerable populations. Lacking relatively stable and strong fiscal revenues and domestic savings, SIDS governments often need to divert scarce public resources from essential social and economic development investments to address disaster-related needs, compromising the pace and scope of future growth. Development in SIDS, therefore, is subject to a range of interconnected and mutually reinforcing economic, social and environmental challenges.

Building resilience at individual, institutional, and private sector levels is essential to achieve sustainable development in SIDS, but available financing for this purpose is limited and difficult to access. The responsibility, expertise and funding for climate and disaster resilient development is scattered across a large number of actors, creating a complex global architecture of funds and providers. While several market-based financing mechanisms have become available globally, they are not equally and easily accessible to all SIDS, and concessional finance from the international community remains a key source of financing to foster climate and disaster resilient development. Understanding how much SIDS are actually receiving and in what ways becomes, therefore, pivotal to help the international community more effectively support SIDS in building climate and disaster resilience.

Resources for resilience have grown significantly, but they still represent a small share of concessional finance. Between 2011 and 2014 (the timeframe used for this report), the volume of concessional finance in support of climate and disaster resilience to SIDS nearly doubled, reaching USD 1.01 billion in 2014. However, this represented only 14% of the total concessional finance directed to SIDS during this period. Bilateral providers gave the bulk of concessional finance for climate and disaster resilience – 71% for the 2011-14 period – with annual funding levels remaining fairly stable. Although multilateral organisations provided a much smaller share of this financing (29% of the total), multilateral commitments to SIDS increased rapidly, nearly doubling from 2011 (USD 226 million) to 2014 (USD 443 million). In addition to these direct contributions, multilaterals channeled close to a fifth of bilateral contributions, in effect serving as a conduit to 44% of the total resilience funding received by SIDS during the 2011-14 period.

In terms of access to finance, striking differences across individual SIDS are prevalent. The smallest nations tend to receive the highest per capita annual financing allocations, largely because of the high fixed administrative costs involved. Geographic and income patterns mask the disproportionate weight of a few countries and a few large and isolated commitments.

Resilience finance is dominated by investments in resilient infrastructure in a few countries. Investments in resilient public infrastructure accounted for USD 335 million on average per year from 2011-2014, or 43% of total climate and disaster resilience financing for this period in part due to the higher cost of these investments. Large one-off commitments also skewed geographic and income patterns.

Access to greater and more effective financing is constrained by a number of challenges:

SIDS are taking positive steps to address some of the challenges of mainstreaming climate and disaster resilience into development. This includes setting up coordination units within key ministries and developing strategic policy documents. However, challenges remain in identifying the risks and impacts of natural disasters, securing adequate resources in national budgets, and reducing inefficiencies and institutional fragmentation caused, in part, by some international processes and funding sources.

Many SIDS depend on a single provider for the bulk of resilience financing, exacerbating financial vulnerability. For 14 of the 35 SIDS considered in this report, across all regions, the top provider accounted for over half of the climate and disaster resilience financing during 2011-14, with this percentage increasing over time. This trend is concerning as SIDS could become overly reliant on the shifting priorities of the dominant donor(s).

The remaining resilience financing is fragmented across a large number of projects, which leads to high transaction costs and places additional stress on the capacity of SIDS. While a few large projects accounted for the bulk of resilience funding to SIDS – mostly directed to Upper-Middle Income SIDS – the vast majority of commitments were provided through smaller sized projects. During the 2011-14 period, more than half of all resilience projects were below USD 200,000 and80% were below USD 1.5 million, yet together, these small projects accounted for only 2% and 10% of the total resilience financing to SIDS. This proliferation of small projects was widespread across all SIDS, with climate and disaster resilience financed through a total of 1,715 projects in 2011-14. Most countries were receiving an average of 10 individual projects per year with commitments of less than USD 1.5 million each. SIDS with the largest number of projects were receiving more than 30 resilience projects in a given year.

Sector-wide approaches and budget support remain limited, as does the implementation of resilience funds by recipient countries. Only 8% (USD 239 million) of the concessional finance for climate and disaster resilient development was provided as sectoral budget support from 2011-14, and financing executed by SIDS governments represented less than 35% of total funding for 20 out of the 35 SIDS examined in this report. The relatively low use of national systems and government budget execution can create an unfortunate cycle, whereby the limited use of these financing modalities by itself contributes to perpetuating low capacity, with implications for the effectiveness and sustainability of investments.

Resilience funding tends to follow large disasters, but predictable, longterm financing is still scarce. Larger disasters are prone to receive larger funding streams than smaller, more recurrent ones. Greater concessional resources for climate and disaster resilience tend to be provided in the wake of major disasters and then progressively fade away, while countries that have not recently experienced large disasters may struggle to receive resilience funding. This low predictability of funding can constrain the ability of SIDS to take more comprehensive and forward-looking steps to reduce vulnerabilities and increase resilience over the long term.

Country access to global climate funds is constrained by complex – and variable – requirements. A multiplicity of special climate funds has been established over the past decade to increase developing countries’ access to financing. For SIDS, however, tapping into these funds remains a challenge due to the complex processes and procedures to access the funds, which, for the most part, exceed the limited administrative and technical capacities of SIDS.

The international community could do more to help SIDS enhance climate and disaster resilient development by: