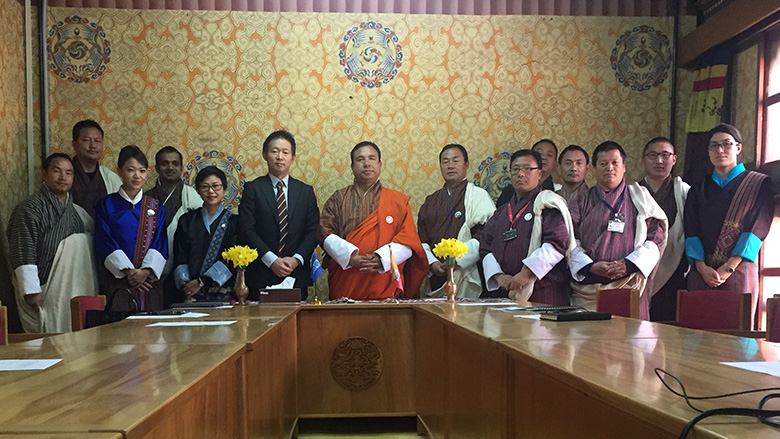 On March 2, 2017, the Royal Government of Bhutan and the World Bank signed into effect the preparation of the Strategic Program for Climate Resilience Grant (SPCR) of US$1.5 million, which will support Bhutan to formulate a long-term plan to improve climate resilience.

The SPCR builds on ongoing initiatives and activities throughout Bhutan while providing a structure to incorporate resilience into development planning, putting in place a coordination mechanism and process of engagement on climate issues building on existing institutions, and developing a roadmap to build capacity and increase investment opportunities in the future.

Bhutan is highly exposed to hydro-meteorological hazards such as floods, flashfloods, landslides, glacier lake outburst floods, windstorms, and cyclones. Extreme weather events expose infrastructure assets (such as hydropower and road network) to increasing risk of floods and landslides, jeopardizing the efficiency of operations. Changes in precipitation also have consequences on availability of water for drinking, agriculture and energy production. With climate change, the frequency and intensity of major hydro-meteorological hazards is expected to increase. Therefore, the SPCR process comes as a very timely intervention to support Bhutan’s capacity to develop a programmatic multisector and climate-resilient investment plan.

“The World Bank is very glad to support the Royal Government of Bhutan in taking forward it’s commitment and initiatives to integrate climate resilience as a core part of development planning,” said Yoichiro Ishihara, the World Bank’s Resident Representative for Bhutan. “We are happy to take a lead from the side of the Multilateral Development Banks which includes International Finance Corporation and Asian Development Bank to work with the Gross National Happiness Commission for the preparation of the SPCR. It is being developed through a participatory process and will identify priorities for mainstreaming climate resilience into development planning and related investments. The World Bank stands ready to collaborate further in this area with the Royal Government.”

“The SPCR process will be used as a foundation to provide inputs in the 12th Five-Year Plan and help in translating the Intended Nationally Determined Contributions (INDC) into action,” said Namgay Dorji, the Royal Government of Bhutan’s Finance Minister. “It will also examine the potential, merits, criteria and mechanisms for Bhutan to access, combine, and leverage climate finance opportunities to support a long-term series of transformational investments.”

The project is supported through a preparatory grant fund provided by the Climate Investment Fund (CIF) through the Pilot Program for Climate Resilience Program (PPCR). The project is expected to be completed by June 30, 2019.

Photo courtesy of the World Bank.