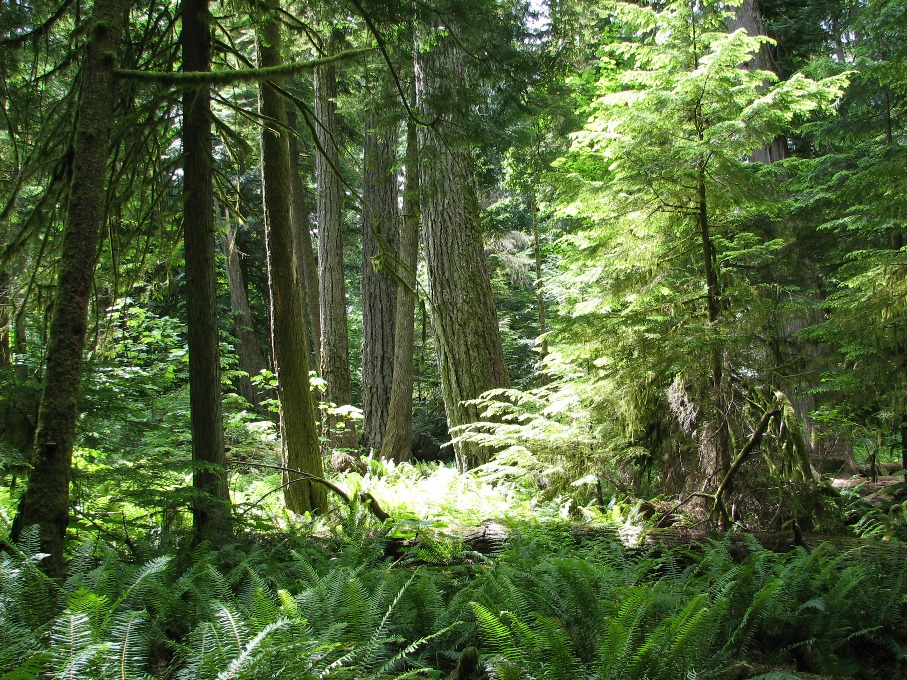 Since the Industrial Revolution, humans have emitted more than 2,000 gigatons of carbon dioxide into the atmosphere. (A gigaton is one billion metric tons.)

This thickening blanket of heat-trapping greenhouse gases is the cause of the global warming we are experiencing today. If nothing changes, climate impacts such as forest fires, stifling heat waves and damaging sea level rise will only continue to intensify. 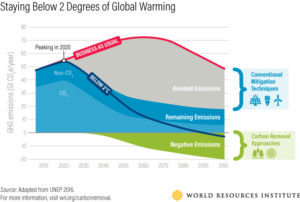 This is a notional scenario consistent with an at least 66% chance of limiting global warming to below 2°C. Some residual gross greenhouse gas emissions (both CO2 & non-CO2) will remain at the end of the century, even with ambitious climate action because they are too difficult or costly to remove entirely. Once negative emissions exceed those that remain, net zero emissions is reached. Faster &/or deeper emission reductions could reduce need for carbon removal; slower &/or weaker emission reductions increases need for carbon removal.

The latest climate science tells us, however, that these efforts alone aren’t enough to prevent dangerous climate change.

To keep global temperature rise to less than 1.5-2 degrees C (2.7-3.6 degrees F), the limit scientists say is necessary for preventing the worst climate impacts, we’ll need to not only reduce emissions, but also remove and store some carbon from the atmosphere. In fact, most climate scenarios show we’ll need to remove billions of metric tons of carbon dioxide annually by midcentury, while also ramping up emissions reductions.

Carbon removal can take a number of forms, from new technologies to land management practices. The big question is whether these approaches can deliver carbon removal at the scale needed in the coming decades.

Each approach faces its own challenges and limitations. WRI’s new series of working papers explores the possibilities and challenges of using carbon removal to combat climate change.

Here are six options for removing carbon from the atmosphere:

Photosynthesis removes carbon dioxide naturally—and trees are especially good at storing carbon removed from the atmosphere by photosynthesis. Expanding forests, restoring existing forests and managing forests to encourage more carbon uptake can leverage the power of photosynthesis to convert carbon dioxide in the air into carbon stored in wood and soils. Scientists say the carbon-removal potential for these measures in the United States alone is hundreds of millions of metric tons per year. For example, every acre of land restored to temperate forest can sequester about 3 metric tons of CO2 per year. These approaches can be relatively inexpensive (generally less than $50 per metric ton) and yield cleaner water and air in the process.

One major challenge is ensuring that forest expansion in one area doesn’t come at the expense of forests somewhere else. For example, reforesting farmland would reduce the supply of food. This could necessitate converting other forests to farmland, unless improvements in farm productivity could fill the gap. Similarly, not harvesting timber from one forest may result in overharvesting in another. These dynamics make restoring and managing existing forests, and reforesting land outside of farmland, especially important.

Soils naturally store carbon, but agricultural soils are running a big deficit due to intensive use. Because agricultural land is so expansive—more than 900 million acres in the United States alone—even small increases in soil carbon per acre, if it can be done, could be impactful. Building soil carbon is good for farmers and ranchers, too, as it can increase soil health and crop yields. Integrating trees on farms can also remove carbon while providing other benefits like shade and forage for livestock.

There are many ways to increase carbon in soils. Planting cover crops when fields are otherwise bare can extend photosynthesis throughout the year, sequestering about half a metric ton of CO2 per acre per year. Using compost can improve yields while storing the compost’s carbon content in the soil. Scientists are also working to breed crops with deeper roots, making them more resistant to drought, while depositing more carbon into the soil.

Managing soil for carbon at a large scale, though, is a tricky proposition. Natural systems are inherently variable, and that makes it a real challenge to predict, measure and monitor the long-term carbon benefits of any given practice on a given acre. The efficacy of some practices is also subject to continued scientific debate. Furthermore, changing conditions or management practices from year to year could erase prior gains. And because a lot of farmland would be needed to remove a significant amount of carbon, governments and others would need to create the right conditions for landowners to store more carbon.

BECCS is another way to use photosynthesis to combat climate change, but it is far more complicated than planting trees or managing soils—and it doesn’t always work for the climate. BECCS is the process of using biomass for energy in the industrial, power or transportation sectors; capturing the embodied carbon before it is released back to the atmosphere; and then storing it either underground or in long-lived products like concrete. If BECCS causes more biomass to grow than would otherwise, or more carbon to be stored where it would otherwise be released back into the atmosphere, it can provide net carbon removal.

But it’s not always straightforward to determine whether those conditions are met. Moreover, if BECCS relies on bioenergy crops, it could displace food production or natural ecosystems, erasing the apparent climate benefits and exacerbating food insecurity and ecosystem loss.

Some forms of BECCS would convert wastes like agricultural residues or garbage into fuel. These feedstocks may be key to the future of BECCS, since they wouldn’t require dedicated land use. Even then, the accounting has to be right—and there are lots of ways to get it wrong—or BECCS may not deliver the expected climate benefits.

Direct air capture is the process of chemically scrubbing carbon dioxide directly from the ambient air, and then storing it either underground or in long-lived products. This new technology is not unlike the carbon capture and storage technology for various emissions sources like power plants and industrial facilities. The difference is that direct air capture removes carbon from the atmosphere instead of reducing emissions. It is relatively straightforward to measure and account for the climate benefits of direct air capture, and its potential scale of deployment is enormous. But the technology remains costly and energy-intensive. It is often difficult to pin down costs for new technologies, but one recent study estimates that it would cost about $94-$232 per metric ton. Previous estimates were higher.

Direct air capture also requires substantial heat and power inputs— scrubbing 1 gigaton of carbon dioxide from the air would require about 7 percent of all projected U.S. energy production in 2050. The technology would also need to be powered by low- or zero-carbon energy sources to result in net carbon removal.

Seawater capture is akin to direct air capture, except CO2 is extracted from seawater instead of air. By reducing CO2 concentration in the ocean, the water then draws in more carbon from the air to regain balance. Seawater is a more concentrated solution of CO2 than the ambient air, which means less work is required to separate it out than in direct air capture. But seawater is also considerably heavier than air, which means more work to move it through the system. Seawater capture will also have to grapple with the added complexities of technology deployment in harsh maritime environments.

The U.S. Navy has already developed a prototype seawater capture device. Because CO2 can be converted to fuel by adding energy (and some Navy vessels tend to have spare nuclear reactors on board), such a technology could allow vessels to create their own fuel and avoid having to stop to refuel. Of course, if the captured carbon is converted to fuel and combusted, it just returns to the atmosphere, but future applications of this kind of technology could provide long-term storage for captured carbon.

Some minerals naturally react with CO2, turning carbon from a gas into a solid. The process is commonly referred to as “weathering,” and it typically happens very slowly—on a geological timescale. But scientists are figuring out how to speed up the process, especially by enhancing the exposure of these minerals to CO2 in the air or ocean.

That could mean pumping alkaline spring water from underground to the surface where minerals can react with the air; moving air through large deposits of mine tailings—rocks left over from mining operations—that contain the right mineral composition; crushing or developing enzymes that chew up mineral deposits to increase their surface area; and finding ways to weather certain industrial byproducts, like fly ash, kiln dust, or iron and steel slag. Scientists have shown that enhanced weathering is possible, but there is more work to be done to map out cost-effective and prudent applications of this approach.

The Future of Carbon Removal

We don’t know today which of these strategies can provide the most large-scale carbon removal in the future, and which may ultimately prove less useful. Each approach offers both promise and challenges.

But what we do know is that if we are to avoid dangerous levels of global warming, capturing and storing carbon already in the air must be part of our climate strategy in the United States and around the world.

It’s time to begin investing across the portfolio of carbon-removal approaches – in research, development, demonstration, early-stage deployment and enabling conditions– so that they become viable options at the scale we need them in the coming decades.

Featured photo of Cathedral Grove on Vancouver Island, BC is by Storm Cunningham.