For the past few months, Megan Jennings and Lluvia Flores-Renteria have been collecting acorns from Native American reservations, storing them at home in their refrigerators to keep them fresh and germinating them in greenhouses.

These efforts are part of the Resilient Restoration project involving San Diego State University ecologists working in lockstep with tribal nation partners and the Climate Science Alliance (CSA). Together, they are working to preserve native species of historic, spiritual and cultural significance to Southern California tribal nations. 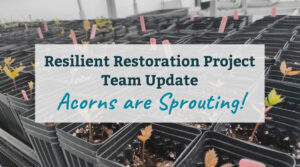 Acorns were a significant staple of the diet for tribal nations in Southern California in the past. They were dried, deskinned, powdered and made into drinks and jelly like sides that accompanied barbecued meat, beans and rice. High in protein and good fats, they were also a key source of protein in the winter months when game was scarce. But this staple has become far less common in native diets.

“We have been resilient through a long history of colonization but we have also lost a lot of knowledge about our life ways and our food was especially impacted,” said Will Madrigal, who is Cahuilla/Luiseño, and is the tribal capacities and partnerships program manager with the Climate Science Alliance.

“We were put in concentration camps — Indian reservations — so we couldn’t go to our gathering spots and commune with our oaks. They made us eat over processed food by way of government rations, sugar, lard and grains that were alien to us,” Madrigal added. “When we began starving, we didn’t have a choice but to adapt, though we longed for our acorns. Going back to our acorns and teaching our ways to our next generation has enabled us to continue and strengthen our traditions.”

Being forced to change their diet hurt their health, leading to obesity, diabetes and heart disease. Efforts are now underway to revitalize indigenous stewardship and restore plant species that hold considerable importance for local tribes. These efforts will support adaptation to the pressing threat climate change poses to tribes, particularly for native plant species such as coast live oak and Engelmann oak that are important to traditional and cultural practices. 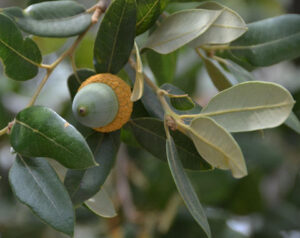 Jennings and Flores-Renteria are working with the CSA and its Tribal Working Group, which consists of more than 20 Southern California tribes, and also University of California, Riverside (UCR) researchers. The Tribal Working Group drives the process, with members of different tribes advising and guiding researchers on the restoration needed on their lands.

“Many plants that are integral to tribal tradition and spirituality are also key for maintaining biodiversity in this region,” said Helen Regan, a professor in UCR’s Evolution, Ecology, and Organismal Biology Department, and co-principal investigator of the project. “Everyone benefits from ensuring the survival of these species.”

The three-year restoration project is supported by the California Strategic Growth Council’s Climate Change Research Program with funds from California Climate Investments—Cap-and-Trade Dollars at Work, and led by ecologists and principal investigators Helen Regan and Janet Franklin at UC Riverside. UCR ecologists will focus on habitat and population modeling for plant species.

Acorns were collected from four tribal reservations in San Diego County which gave permission and assistance to gather acorns — since this is a right reserved only for California First Nations.

“We focused on acorns because it’s the lifeblood for many tribes,” Jennings said. “Once we germinate the seedlings and our greenhouse experiments are complete, we return them to our tribal partners to plant them on their lands. We are also working with them on launching pilot projects to build capacity for restoration and propagation efforts.”

“My hope is that this will provide additional support and information for our tribal partners to advance their restoration efforts for climate adaptation,” Jennings said.

Madrigal said the project will go a long way to help native resilience efforts. Tribes have been convening through the Climate Science Alliance to discuss climate adaptation, and “wrapping our heads around the problems so we can collaboratively strategize.”

Indigenous communities have faced a lot of adversity and “been forced to figure out our own adaptation strategies but with this collaboration now, we have support that will create a new type of synergy which will propel tribes to meet our needs,” Madrigal said.

“Not so long ago, tribes didn’t know where to start and how to address climate change,” Madrigal said. “We understood it since we lived in harmony with our environment, but we’ve begun returning to our responsibilities as stewards of the land. This project will strengthen our resiliency and understanding of the problems so we can move forward in a collaborative way.”

Sounds of children playing in the background filtered through as Madrigal spoke via Zoom. He said he felt this joint project was inspirational because the work would help improve the future for his children and youth across the region.

The CSA is a six-year-old organization that brings people together to work collaboratively to advance climate resilience on a regional scale. It offers a space for researchers, managers, community organizations, foundations, artists, and educators to knit together meaningful, effective partnerships. It has a growing, diverse network of 360 organizations and agencies and Jennings has been a part of this effort since the beginning, according to Amber Pairis, its Executive Director.

“We’ve found really strong synergies with this kind of sustained and meaningful engagement,” Pairis said. “Megan and Lluvia at SDSU and the UC Riverside researchers are at the forefront of climate adaptation because they are willing to combine tribal ecological and cultural knowledge with western science.”

The close collaboration has “allowed us to create a space for restoration work where tribes lead the project from the beginning to end, a place where native leaders emerge and use their voice,” Madrigal shared. “I have really great expectations for the future, for our tribal communities and the CSA, to be good stewards of the land and good ancestors.”