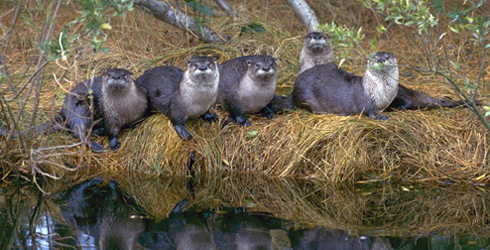 Colorado Parks and Wildlife biologists say that, after completing the reintroduction of about 120 young male and female otters 25 years ago, otters are multiplying with a statewide population now numbering in the hundreds.

The recovery here, mirrored in other states that reintroduced otters decades ago, stands out in the struggle for wildlife survival because biologists consider otters a “sentinel species” that is highly sensitive to pollution. It shows how a relatively modest state effort to keep an imperiled species off the federal endangered species list — the U.S. ecological equivalent of an emergency room — can lead to a comeback.

U.S. Fish and Wildlife Service biologist Leslie Ellwood said “We’re now seeing river otters in streams and lakes where they had not been seen for the past 100 years.”

“In general, we humans screw a lot up. This is something we’re doing right, bringing these animals back. Success stories are hard to find,” said LynnLee Schmidt, mammals curator at Denver’s Downtown Aquarium, which is home to three otters.

A recovery would mean many measures are working, including the 1972 Clean Water Act, bans on building in buffer zones along waterways and law enforcement work to prevent the illegal killing of otters.

See article by Bruce Finley in The Denver Post.