In Guatemala, the breathtaking Tikal pyramids draw thousands of visitors per year…and with good reason. Not only does this ancient metropolis—an archaeological wonder featured in Star Wars: Episode IV A New Hope—attract tourists who are fascinated by ancient Maya culture, it happens to sit inside the magnificent Maya Biosphere Reserve (MBR).

This 5 million-acre (approximately 2.1 million hectares) reserve—created by the Guatemalan government and UNESCO in 1990—anchors the largest remaining natural forest block in Mesoamerica.

But the MBR is not your typical protected area. Rather than a single expanse of state-controlled land, the reserve is a network of more than two dozen different management units. Eleven of these units are 25-year forestry concessions, nine of which are managed by local communities for timber and other forest products.

Does community forestry work as a conservation strategy? Let’s put it this way: the forest concessions of the Maya Biosphere Reserve boast a near-zero deforestation rate. Even better, the young people are moving beyond conservation into restoration, since vast tracts of forest were destroyed before this conservation effort got underway.

What that means, in plain language, is that nine local communities have been given the right by the government of Guatemala to make a living from the forest, as long as they do so sustainably. The Rainforest Alliance has been working with these concessions since 1999, first on certification, and then to develop sustainable forest enterprises, which include harvesting and selling “non-timber forest products” (such as nuts and palm fronds for floral arrangements), in addition to extracting timber for export according to the standards of the Forest Stewardship Council. 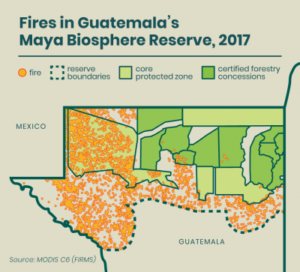 A satellite fire map of Guatemala’s Maya Biosphere Reserve during the 2017 dry season. Fires are often an indicator of slash-and-burn logging and forestland being cleared for agriculture. As seen here, fires were concentrated in the reserve’s core “protected zones” in the west and “buffer zones” along the reserve’s southern edge. However, there were very few fires within 11 forest concessions managed by communities that the Rainforest Alliance works with to develop sustainable forestry enterprises.

This approach, called community forestry, is founded on the idea that people who make their living from the forest have a strong incentive to protect it. Does community forestry work as a conservation strategy? Let’s put it this way: the forest concessions of the MBR have boasted a near-zero deforestation rate for the last 14 years–a remarkable feat given that areas directly adjacent to these concessions suffer some of the highest deforestation rates in the Americas.

In fact, the concessions have had much better success keeping the forest standing than most of the MBR’s units dedicated to strict protection. The MBR’s Laguna del Tigre National Park, for example, has been heavily deforested for the establishment of large-scale livestock operations, many of which are tied to drug trafficking and organized crime. Moreover, the highest concentration of forest fires in the reserve happen in “protected” and “buffer” zones, whereas very few forest fires occur in the concessions (see satellite map).

These conservation successes are thanks to the people who live in the concessions—who are motivated to protect the forest because they make a good living from it. The concessions generate more than $5,000,000 USD in annual revenue and thousands of jobs—this in a region where legal employment is scarce. Poverty rates in the concessions are significantly lower than in other parts of Guatemala, making out-migration from the concession communities virtually unheard of—a noteworthy fact given that in general, the rate of Guatemalans migrating to the US is high and rising.

The Rainforest Alliance’s work in the MBR is emblematic of one of their key strategies for conserving forests all over the world. For more than a decade, they have been on the forefront of the community forestry movement, working with more than 100 forest communities and small- and medium-sized enterprises—from smallholder plantations in temperate zones to communally owned tropical forests in Cameroon, Indonesia, and the Amazon.

Together with their partner communities, they devise and implement landscape-specific strategies to improve local forest businesses while respecting the communities’ own needs and aims; all with the goal of building the health of forests and communities.

BEYOND TIMBER: FRUITS OF THE FOREST 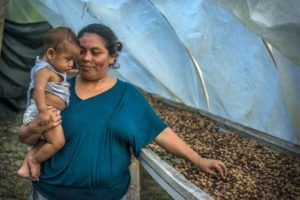 “Before, we didn’t place any value on the ramón nut; it grew in the forest and that’s where it stayed,” says Grecia Magdalena López, president of the Ramón Nut Value Chain Committee, based in the Uaxactún concession.

In the 1990s individuals began gathering and selling the green, raw nuts. But it wasn’t until the Rainforest Alliance held trainings (with logistical support from the Association of Forest Communities of Petén (ACOFOP)) in 2012 that López, along with women from seven communities in the region, learned to process the ramón nut into a flour for export, most commonly for use in beverages; these products fetch higher prices than the raw nuts. At home the women use the flour to make tamales and baked goods that they can sell or feed to their families.

At the training sessions, the women also learned to organize themselves in order to negotiate better prices. Now the Ramón Nut Value Chain Committee—made up entirely of women—works as a group to boost incomes and share resources. Since coming together, the women have been able to negotiate a price for ramón nuts almost four times higher than what they were getting individually.

“When you go to one of these communities and you see women integrated into timber and non-timber production and also in the leadership of these enterprises, when you see teenagers becoming professionals—teachers, nurses, technicians—you have faith,” says José Román Carrera, the Rainforest Alliance’s director of partnership and development for Latin America. “I’m totally convinced that the forestry concession system works.”

Román, who was born and raised in the northern state of Petén, where the MBR is located, initiated another non-timber project in the Uaxactún concession that enabled women there to harvest and sell xate, the fern-like plant that adorns floral bouquets and Palm Sunday church services (more than 30 million xate fronds are exported to the US and Canada each year for Palm Sunday alone).

“It wasn’t easy to convince the husbands to let their wives work at first, but we succeeded,” says Ana Elizabeth Centeno, who once ran the xate shop (she now manages her community’s social benefits). “I’m so happy to see how many women now can put a little money in their purses.”

The Rainforest Alliance training for women in the concessions here reflect just a part of our work to help forest communities build sustainable enterprises. 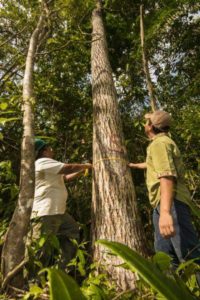 A mahogany “mother” tree in the Carmelita forest concession is marked “S” for semilla (seed) to show that it’s not to be cut down. Photo: Sergio Izquierdo

In order to win and maintain a forestry concession here in the MBR, the government requires Forest Stewardship Council (FSC) certification. That means that the forestry enterprises in the concessions follow sound principles of sustainable forest management. For example, they typically harvest less than one tree per hectare, based on annual plans that prescribe which trees are to be harvested and which will be left for future harvest or protected as seed trees.

Historically, timber harvesting in Guatemala focused heavily on mahogany (Swietenia macrophylla) and Spanish cedar (Cedrela odorata), both of which still make up the bulk of harvest volume and forest profits.

But the concessions have been working to diversify production, and sharp increases in demand for lesser-utilized timber species like santa maría (Callophylum brasiliense), pucté (Bucida buceras), and machiche (Lonchocarpus castilloi), among others, is helping.

Uaxactún also sells its timber directly to US guitar makers and other businesses. Lumber sales have paid for the construction of a school in the community and scholarships for studying abroad.

On any given day, the children of El Porvenir, a community of 200 families just outside Guatemala’s Tikal National Park, can be found tending to their school’s vegetable garden, measuring the diameter of a mahogany, or planting saplings behind their school.

These activities have a very specific purpose, says teacher Lesbia Gualip: “It’s not just that we plant a tree, it’s why we plant the tree. We teach lessons about deforestation and climate change,” she says. The students even learn how to estimate a tree’s potential for storing carbon. 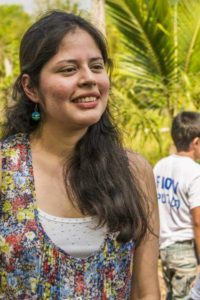 Gualip is one of many teachers in Guatemala who’ve participated in the Rainforest Alliance’s education program, which provides training, hands-on learning tools, and support in implementing conservation and climate-related activities into existing school curricula.

Climate education here is especially critical, as Guatemala faces one of the worst deforestation crises in the Northern Hemisphere, and—perhaps not surprisingly—the people of Guatemala are suffering severe effects of the global climate crisis.

Inadequate rainfall, crop failures, and increased forest fires have devastated many communities throughout Guatemala, diminishing food supplies in a country that already suffers the highest rate of chronic malnutrition in Latin America.

The Rainforest Alliance has long worked to promote sustainable livelihoods and natural resource conservation in Guatemala, but as education manager Maria Ghiso points out, “The critically important conservation work we’re doing in Guatemala would not go very far if we weren’t also training the next generation to protect forests and work in harmony with the environment. Teachers like Lesbia are showing their students they can shape their community’s future.”

FROM CONSERVATION TO RESTORATION

And in some ways, the school’s 85 students are already taking their knowledge forward, implementing reforestation projects in communal areas.

“There’s a problem in our area: people have cut down so many trees without permission,” Gualip says. “Big stretches of forest have been turned into pastures for grazing. But our children have learned that trees are very important, and they take that message home to their parents and the whole community.”

This article originally appeared on the Rainforest Alliance website.Reprinted (with minor edits) by permission.