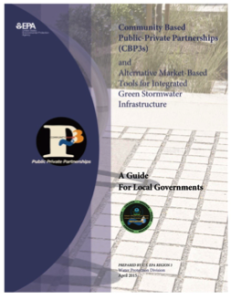 Over 100 million acres of developed land exists in the U.S., which has generated 25 million acres of impervious area. While the area of impervious cover only represents about 2% of the land area, the impacts to the nation’s waters, especially in urban areas (where most of us live) go far beyond this proportion. These impacts will continue to happen, as will impacts from continued development, until we find new ways to make stormwater infrastructure investments cheaper, faster, and more effective.

A new approach has been developed to meet this challenge. This new approach to implementing green stormwater infrastructure (GSI) at a large scale referred to as “community based public-private partnerships” or CBP3s places community benefits as the highest priority.

A guide on this approach was released on Earth Day (April 22) of 2015 and is the first document dedicated to this approach. The guide, titled Community Based Public-Private Partnerships (CBP3s) and Alternative Market-Based Tools for Integrated Green Stormwater Infrastructure: A Guide for Local Governments, provides an in-depth overview of the CBP3 approach. This new approach to implementing GSI, as well as other environmental and social infrastructure, will become the norm in the future – this is truly a game changer in every sense of the word.