When Scientific Technologies Corporation (STC) announced that they would be moving their headquarters from a sprawl area on the outskirts of Scottsdale, Arizona to the revitalized downtown Phoenix Warehouse District they didn’t expect that the anticipated move would generate so much energy and enthusiams among their staff.

The historic Warehouse District is seen as an “innovation community”, and the STC employees look forward to becoming a part of it. The move will include their Software Engineering services, and won’t happen in January of 2018. But already, the expectation of leaving their isolated, sterile current location has revitalized the company culture.

The Phoenix Warehouse District has already attracted many companies downtown, thanks to its combination of heritage, convenience, and walkability. Current businesses residents include PT Web, Galvanize, and R&R Marketing).

Slowly but surely, it is happening in a section of the city where buildings once laid dormant for more than 20 years. “This is a golden moment for Phoenix,” says Phoenix mayor Greg Stanton.

The rise of the warehouse district, like the mythological phoenix, began to take shape a few years ago with the passage in 2015 of a 35-year, light rail expansion plan through the central spine of Phoenix.

It connected the neglected south side of town to downtown and, equally important, local campuses for Arizona State University and University of Arizona. This is a good example of the power of the 3Re Strategy: they reconnected the warehouse district, which led to the buildings being repurposed and renewed.

STC CEO Michael Popovich said, “The simple fact that our company knows we are moving, and have had the opportunity to see firsthand what the Warehouse District offers, has created a new level of excitement and energy in a 30-year-old company. We are working to re-invent ourselves for the next 30 years and this is the energy we need.”

One example: Dave Lesser, Director of Product Innovation at STC, suggested a 24-hour period in which all employees could (if they chose to) work on anything they wanted, followed by presentations the next day. 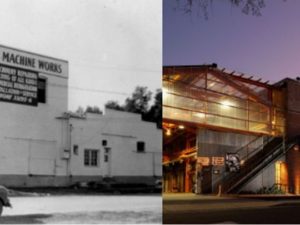 That launched the Ideas Start Here Day at STC that was scheduled for August 24, 2017. With help from the STC Marketing team, who turned the day into a summer camp theme, staff from throughout STC formed Idea teams. Twenty-six hours after the event started, 19 teams presented their projects and ideas to the company. Ideas ranged from blockchains to podcasts, from new product ideas to improving existing ones.

Popovich said, “During the presentations, I learned as much about our people as I did the value ofprojects to the organization. You often know the job the individual does every day, but rarely do you know or appreciate all the skills and ideas they have. When at 2 AM some of the teams were still working on their projects, I knew the power of positive energy. I cannot wait to move to our new headquarters in downtown Phoenix.” The company has estimated the ideas generated will result in hundreds of thousands of dollars of savings in 2018 alone and for the new product ideas, the sky is the limit right now.

Dave Lesser, who already leads an STC team in temporary space at Galvanize in the District, said of the event, “This is what great companies do. They look for ways to innovate, and create community and high-energy culture.” He pointed out models from Amazon and Google and stressed the benefit of the energy already around the Warehouse District move.

The rebirth of this formerly rundown neighborhood is creating an exciting, palpable energy and is attracting an eclectic collection of creative companies, institutions, and events spaces that are becoming a community bound by restoring the character of this area.

All photos courtesy of the Phoenix Warehouse District, unless otherwise credited.