The goal is to revitalize the corridor, based on a clear vision for the future of Buffalo‘s waterfront. This new vision would inform the direction for investment in placemaking, and would stimulate economic development opportunities. With any luck, the winning vision will be based on the 3Re Strategy: repurpose, renew and reconnect.

Assembly Majority Leader Crystal Peoples-Stokes said, “For years we’ve been talking about the future Buffalo Skyway and ways to reconnect the people with Buffalo’s most vital resource – its waterfront. Now, with the Governor’s Skyway competition underway we’ll finally see what experts envision for our Skyway. I can’t wait to see the winning design and look forward to a new waterfront that’s accessible to all residents. Good luck to all the participants.” 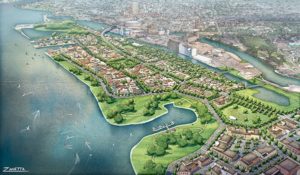 An earlier proposal by Moule & Polyzoides to green and revitalize the corridor in a way that reconnects the city to its waterfront.Credit: Zanetta Illustration

Completed in 1953, the Skyway was originally designed to connect truck traffic from multiple large and small factory complexes and the Port of Buffalo to the then-fledgling interstate highway system. Yet with the closings of the region’s major steel plants in the 1980s and changing land uses along the corridor from heavy manufacturing to recreation, the Skyway now largely services daily commuter traffic from the “Southtowns” – Buffalo’s southern suburbs.

“Buffalo is one of the great urban success stories in this country, and it’s been a remarkable turnaround,” Governor Cuomo said. “We want to continue that momentum, and the Buffalo waterfront has always been one of the great assets as the potential for growth opportunities. We have realized it through Canalside and we want to do more. So we are asking the best minds in the country – planners, designers, community groups – to give us ideas to revitalize the Skyway. The request for submissions will go out today and I think it will elicit a number of proposals, and there will be a community participation process, and then we will pick a winner.”

“Like so many who grew up in Western New York, I’ve seen the remarkable transformation of Buffalo’s waterfront which for so long seemed like an impossible achievement,” said Lieutenant Governor Kathy Hochul. “With more visitors making their way to Canalside and the Outer Harbor, Buffalo needs to reimagine the skyway for the future. This competition will harness new ideas for the transportation needs of today and tomorrow. I look forward to seeing bold and creative possibilities for a new vision for our waterfront.”

The process involves a two-part submission. Part 1, open now, allows respondents to provide an overview of their idea and how it addresses the main objectives and constraints of the competition through an application form available here. Submissions will be evaluated for responsiveness to the goals of the competition, technical complexity, and feasibility.

Assembly Member Sean Ryan explained, “The Skyway was originally built to serve as a vital part of our traffic infrastructure, but it’s becoming clear this roadway may not be a viable part of our future transportation plans. This competition will help to showcase innovative ideas for what the future of the waterfront will look like, and develop creative solutions on how to redevelop traffic patterns to accommodate motorists. I look forward to seeing the ideas that come forward as a result of this competition, and I applaud Governor Cuomo for working to find a creative solution to an issue that will impact the Buffalo Waterfront for generations to come.”

Congressman Brian Higgins said, “For too long the Skyway has hung over this City as a structure intended to serve yesterday’s Buffalo, one that takes people up and away from our waterfront instead of one that invites people in. The Governor’s initiative invites creative ideas to facilitate better connections to our waterfront destinations, create alternative transportation options and tear down barriers to greater economic opportunities. This larger community discussion about the future of the Skyway is long overdue.”

A jury of experts has been assembled to judge the submissions and will hear from finalists in an event setting to select the three prize winners from this group of respondents. Winners will be announced by late summer 2019.

In February, Governor Cuomo announced his intent to conduct a national design competition to solicit the best ideas for a new vision for the current Skyway Corridor. The Skyway, a four-lane limited access expressway, extends four miles along the City’s Buffalo River and Lake Erie waterfront, and carries almost 40,000 trips per day of commuter traffic as part of the regional highway system.

Factors the jury members will consider include: the costs to realize a particular vision and respondents’ ideas on funding it; how well the benefits of a vision are quantified and demonstrate how they would outweigh the costs to complete; and how well it could accommodate future daily traffic loads between downtown and the Southtowns.

Governor Cuomo previously announced the chair and panelists responsible for judging the competition. The panel will be chaired by Empire State Development Commissioner Howard Zemsky, with 10 panelists including Buffalo Mayor Byron Brown, New York Secretary of State Rossana Rosado, and local and national experts in the fields of architecture, design, urban planning and transportation.

Howard Zemsky said, “We look forward to the creativity from world-class talent that this design competition will bring, resulting in better waterfront access and economic impact that further builds on Buffalo’s transformation under Governor Cuomo’s leadership.”

Jury Panelist and Buffalo Mayor Byron W. Brown said, “I thank Governor Andrew Cuomo for his continued commitment to the City of Buffalo. I encourage designers nationwide to come up with creative ideas for re-imagining the Skyway corridor that will enhance our already vibrant waterfront and revitalized downtown, and reinforce the City of Buffalo’s reputation as a growing world class destination.”

After reviewing the Request for Submissions, participants can submit ideas here.