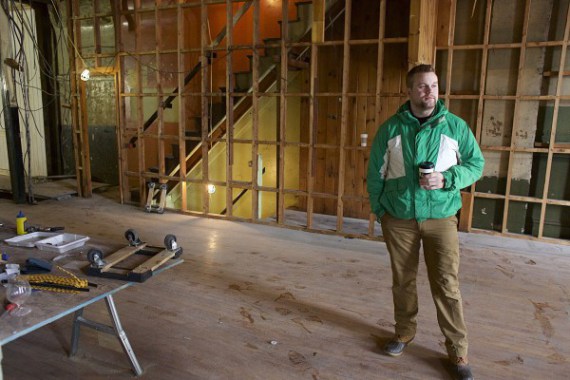 When Roy Hubbard left Connecticut to attend the University of Maine, he had no idea that less than a decade later he’d embark on an ambitious project to help reshape Bangor’s historic West Market Square.

Hubbard admired the architecture of downtown Bangor’s buildings and ornate houses. Lumber barons built Victorian and Greek revival homes in Bangor, many of which stand today.

Hubbard saw the potential in downtown development. He had worked with Abe and Heather Furth, who had acquired and renovated 91 Main St. in downtown Bangor.

They urged Hubbard to redevelop the derelict Dakin Building.

“The building was an absolute train wreck,” Hubbard said. “It was flooded, there was a waterfall from the top floor and hundreds of pigeons.”

Abe Furth motivated Hubbard to look past the flaws and redevelop the historic property into apartments.

After $2 million and more than a year of work, including the removal of 180 tons of debris, 28 Broad Street Lofts has welcomed its first tenants.

Hubbard isn’t alone in his desire to create apartments in downtown Bangor. Emery and Hubbard discuss the nationwide trend of reurbanization.

For three decades, Bangor has worked to transform the downtown. The Bangor waterfront successfully has been redeveloped, new businesses have moved into empty storefronts and living spaces have been created to allow for a vibrant downtown area.