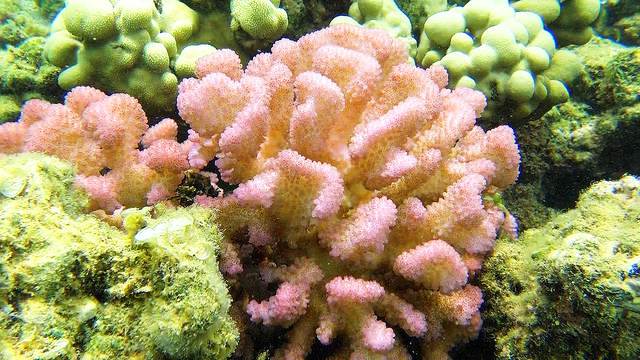 Life is thriving once again under the surface of the shallow bay at Anini Beach in Kalihiwai, Hawaii.

Yellow antler corals, pink cauliflower corals, and purple lobe corals have returned to health in the area, and researchers say they’ve seen up to eight inches of coral growth there. And that’s just in 2017.

“I just did my bi-monthly survey at Anini and the corals were all disease free and continuing to grow at a rapid rate,” said Terry Lilley, an advisor to Reef Guardians Hawaii (RGH), who has been shooting underwater footage in the area for more than five years.

He continued: “An example is the yellow antler coral, white finger coral and brown rice coral, (which) all grew about eight inches in one year. This is so exciting as we all thought that corals grew, at best, a few inches a year.”

RGH is a 501(c)(3) nonprofit organization based on the island of Kauai. The RGH team is composed of seasoned, professional organizational leaders, ocean researchers, community leaders, students and the ocean user community that love and take responsibility for our near shore ecosystem.

Several diseases have been playing a major role in the decline of several native coral species surrounding Kauai as its neighboring islands. Coral bleaching, black band, montipora and cyanobacteria are but a few that have reduced the living coral population significantly in a mere three years.

Phase one requires RGH to fund a study of healthy corals in same proximity and sometime same species as their dying neighbor corals. Recent studies and data collected revealed this anomaly which requires further study. With positive results, they can ascertain what mechanism is in play here and possibly use that information in future coral restoration projects.

The credibility and validation from this powerhouse of world-renowned researchers and scientists is a valuable tool necessary to make progress and to accomplish their mission: To educate, discover, comprehend and create solutions for our near shore reef habitats and surrounding ecosystems.

This collection of data provides an unprecedented and detailed 5 year history of repeated visits to most of Kauai’s offshore reefs! The results are beginning to show…

RGH has continued testing the waters of several rivers including the Hanalei River and discovered the presence of heavy metals including Nickel at rates 10-100 times the approved safety levels. Local and Federal government agencies have been alerted and they are working with them to resolve the issue.

RGH has made new significant scientific findings. One of those was by Terry Lilley, who began documenting the first outbreak of cyano-bacteria infecting the corals back in 2011.

This was front page news in the Los Angeles Times and other news agencies. The USGS was alerted and sent Dr. Thierry Work and his team to Kauai to do a study of the coral diseases including the discovery of dissolving corals, fractured corals and diseased and multi-tumored sea turtles.

Documented the destruction and fracturing of corals and injured marine animals due to the U.S. Navy’s electronic warfare program (RIMPAC). A Federal Judge ruled in favor of halting those operations.

See article by Jessica Else in The Garden Island.