In one of Thailand’s largest and most ambitious reforestation efforts, Charoen Pokphand Foods (CPF), government forestry officials, the Thailand Greenhouse Gas Management Organisation and the Biodiversity-Based Economy Development Office came together to replant trees in the Lop Buri highlands overlooking the Pasak Dam.

The CPF Conserve Ecosystem Project is aimed at restoring watershed forest around the Pasak River basin at the Phraya Doen Thong Mountain, said Wuthichai Sithipreedanant, senior vice president for corporate social responsibility and sustainable development at the food agro conglomerate. The five-year project, ending in 2021, has drawn thousands of volunteers.

In July of 2017, a large, noisy drone flew overhead as 3000 volunteers from agro giant Charoen Pokphand Foods (CPF) and other crop firms, members of the Royal Forestry Department, the armed forces and conservation agencies plant saplings in an effort to reforest 6,000 rai (2400 acres / 10 square kilometers) in Lop Buri province. 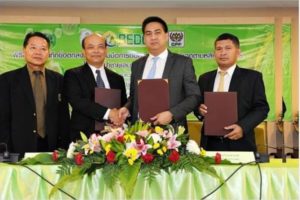 The five-year project, which will end in 2021, is using both army and forestry officials to revive these formerly richly-forested mountains. They are now largely bare, creating dangerous flooding and mudslide threats.

In 2014, CPF expanded the project and renamed it “Grow – Share – Protect the Mangrove Forest”. This was done in collaboration with the Department of Marine and Coastal Resources (DMCR), Biodiversity-Based Economy Development Office (Public Organization) and Civic Network to support and promote the conservation of soil water forest and biodiversity

See full article in The Nation.