After many decades of decline, the Mon Valley (sort for Monongahela River Valley) in Pennsylvania finally has some good news to report. The emergence of craft breweries has sparked an economic revival.

This isn’t surprising, since it’s s story that has been repeated in hundreds of distressed community all around America. Craft breweries have a unique combination of four revitalizing factors: 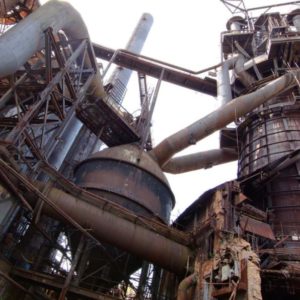 Carrie Furnace is the site of the annual Beers of the Burgh Festival.

Now, all up and down the Mon Valley, where blast furnaces once roared, craft breweries are stoking economic growth in long-overlooked mill towns.

Christine Mondor, principal at evolveea and president of the Pittsburgh Planning Commission, says that to understand the impact of craft beer on former mill towns, it helps to get a little zen: picture a stone laying on the beach. The wind is blowing, and little grains of sand pile up and gather around it.

“It attracts a lot of other stuff,” says Mondor. “It slows people down, and then before you know it you’ve got a little ecosystem there that’s supporting a whole lot of other permanent plans and structures.”

In just a few years, Voodoo Brewing Homestead and Brew Gentlemen in Braddock have become lodestones, pulling in other businesses and visitors to the long-overlooked neighborhoods to which they’re wedded.

For generations, the Mon Valley was the economic engine that drove the Pittsburgh economy. However, as most people in this region are well aware, over the past three decades the Valley’s industrial base was virtually decimated.

In the late 1970s and early 1980s, US Steel, Westinghouse Electric, WABCO, Union Switch and Signal, and Wheeling-Pittsburgh Steel all closed major manufacturing plants in the Monongahela Valley. Some sources indicate that as many as 175,000 jobs were lost in the region when these plants closed.

Major industrial sites occupied hundreds of acres of land, and as landowners, the corporations were major taxpayers. Without this business tax, communities in the Mon Valley were hard-pressed to provide basic services to their residents. People moved out, and the Valley’s role as the engine of the regional economy was lost.

Revitalization efforts have been a constant, but they really got started in earnest in 1988 with the creation of the Mon Valley Initiative. They help renovate and construct high quality, affordable housing, and assist communities to redevelop and maintain their Main Street districts. They also provide job seekers the tools they need to enter the workforce, and help member Community Development Corporations become more efficient and effective organizations.

Mon Valley might never be the heart of the regional economy again, but at least its heart has started beating again, thanks to the rise of craft breweries.

See article in Next Pittsburgh by Brian Conway.