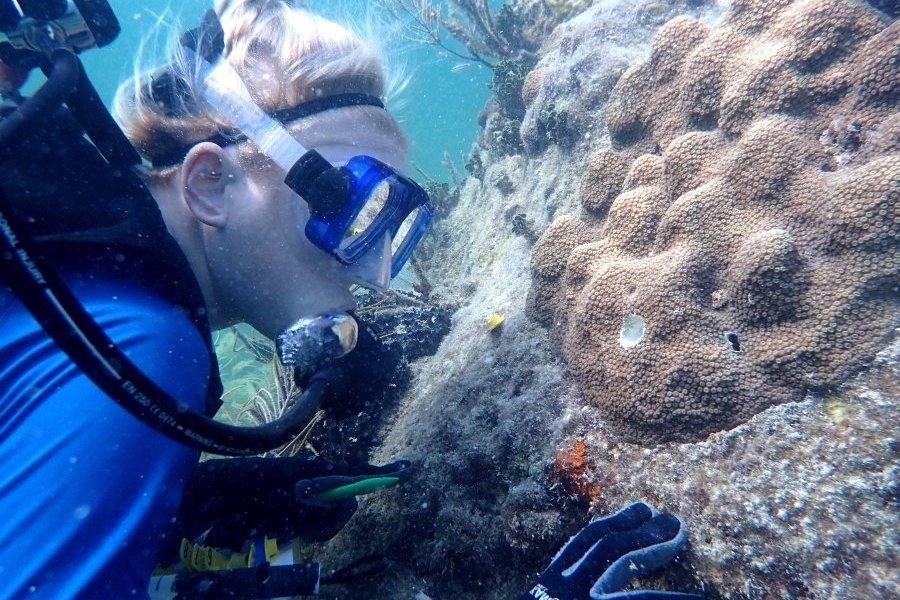 On August 4, 2020 in Sarasota, Florida, it was announced that —for the first time—the massive corals that had been restored to Florida’s coral reefs are ready to become parents in the wild. This is a breakthrough for Mote Marine Laboratory‘s scientific efforts to restore critically imperiled coral reefs, the “rainforests of the sea,” to self-sustaining life.

Both species are listed as Threatened under the Endangered Species Act. The presence of gametes indicates that these corals are sexually mature, gravid (pregnant), and ready to produce the next generation of coral “babies” with fresh genetics to help revive declining coral populations.

These corals are achieving critical milestones for the entire field of coral reef restoration—showing the first signs that they are capable of producing new generations of corals on their own. These and other corals in Mote’s restored populations survived big challenges to reach this point, demonstrating resilience. Their success validates the significance and progress of Mote’s science-based, resilience-focused coral restoration. 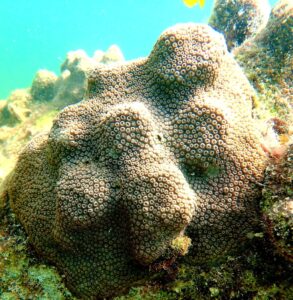 The mountainous star coral (O. faveolata) colonies, which Mote outplanted in 2015 off of Cook Island near Big Pine Key, are the first corals of any massive or mounding species that have been documented to produce gametes (i.e., be sexually mature) after being restored in Florida or Caribbean waters.

However, using the propagation and outplanting methodology that Mote pioneered, which is called “microfragmentation-fusion” or “reskinning,” larger colonies of corals can be generated faster. Instead of decades, Mote can now produce sexually mature mountainous star corals in as little as five years.

Even more encouraging is that these restored corals endured a global bleaching event in 2015, a Category-4 hurricane (Irma) in 2017, and the 2019 outbreak at this site of stony coral tissue loss disease, which has affected millions of reef corals across Florida’s Coral Reef and beyond.

Another reason to celebrate. 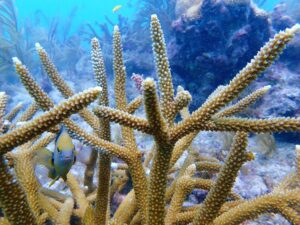 The staghorn coral (A. cervicornis) colonies, outplanted in 2016, 2017 and 2018 at Eastern Dry Rocks off of Key West, are the first Mote-planted staghorn corals observed to reach sexual maturity after being restored to the reef.

This demonstrates that staghorn outplants can reach this critical milestone within as little as two years, an observation that has been cited only once before.

These populations also faced environmental stress, including Hurricane Irma in 2017, which certainly had negative impacts on these corals, but clearly, they have been able to recover and are now thriving. 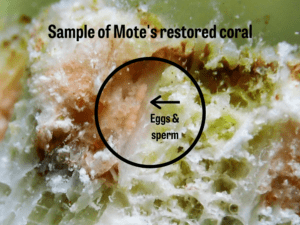 Mote’s staghorn corals currently bearing gametes, and components of Mote’s planned spawning research efforts this year, are located on two of the seven “Iconic Reefs” designated by the National Oceanic and Atmospheric Administration (NOAA) as sites that will receive a concentrated, collective effort of restoration support in the coming decades.

Mote’s research and restoration activities described here were permitted by NOAA’s Florida Keys National Marine Sanctuary. Funding for this research is provided by the National Science Foundation, NOAA Restoration Center, the State of Florida, a Mote Postdoctoral Fellowship award to Dr. Koch, and philanthropic donations to Mote from several sources.