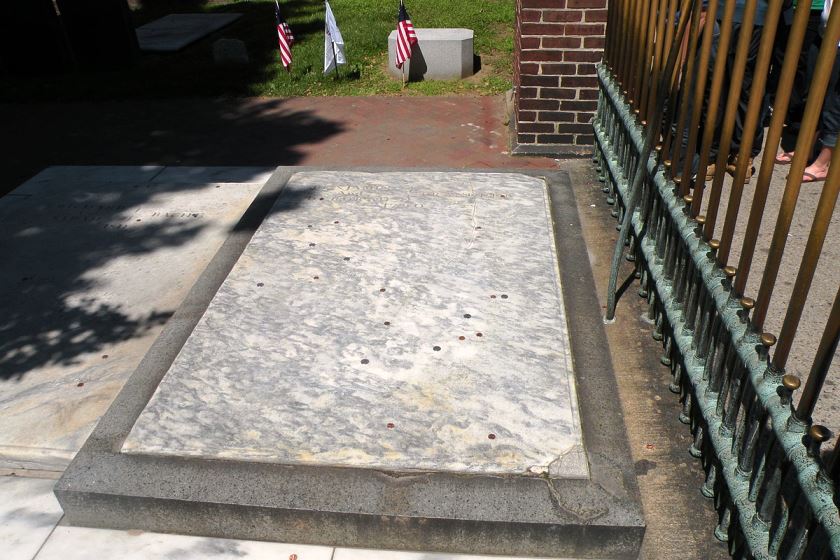 Benjamin Franklin was one of the Founding Fathers of the United States. Franklin was a renowned polymath and a leading author, printer, political theorist, politician, Freemason, postmaster, scientist, inventor, civic activist, statesman, and diplomat.

As a scientist, he was a major figure in the American Enlightenment and the history of physics for his discoveries and theories regarding electricity. As an inventor, he is known for the lightning rod, bifocals, and the Franklin stove, among other inventions.[2] He facilitated many civic organizations, including Philadelphia’s fire department and the University of Pennsylvania, an Ivy League institution.

For the past few weeks the opening in the brick wall surrounding Christ Church Burial Ground has been closed off with tarp. The main attraction sitting behind it—Benjamin Franklin’s grave—is currently undergoing careful restoration to rescue Franklin’s tombstone from a heavily damaged state.

“Most people probably won’t even notice we did anything,” says Marco Federico, the architectural conservator for Materials Conservation who has been leading the project.

The famous crack that snakes right down the middle of the founding father’s grave marker will still be visible upon its official unveiling on May 23, 2017, but the fissure will have been filled on the inside to prevent further deterioration. Federico says the idea is not to give the stone a facelift, but rather to restore it safely to its original, humble character.

While it wasn’t the cause of the crack, the pennies that tourists traditional throw at the gravestone open it further and leaves pitting and small fracturing all over the stone’s face. Increased signage will attempt to dissuade the practice after restoration. This might not be easy, though: professional tour operators often instruct their groups to toss pennies, without offering any historical information about Ben Franklin’s achievements.

Christ Church has been planning to save the stone for years, and finally found a window of opportunity to engage in a restoration effort last year. The church received grants from the Florence Gould Foundation, the University of Pennsylvania, and the Pennsylvania Historical and Museum Commission to help fund the project.

They then turned to the public for the final stretch, launching a GoFundMe campaign that raised over $14,000, including a $5,000 donation from Bon Jovi.

“The beauty of the GoFundMe was the donations from regular citizens,” says John Hopkins, the burial ground coordinator for Christ Church. “Ben Franklin was a man of the people, and he was a fundraiser in his time. He probably would have invented GoFundMe if he was alive.”