Small Change is a crowdfunding site that allows everyday people to invest in real estate projects that change cities and neighborhoods for the better.

By bringing investors together through the power of its crowdfunding platform, Small Change makes real estate a reality, signaling significant changes in the neighborhoods and communities in which its developments come to life.

How does one measure this change? What metrics can investors and community members use to keep score on the viability of Small Change projects? Say hello to The Change Index.

The Change Index is Small Change’s proprietary system that illustrates the impact its projects have on its surroundings. The Change Index uses data points such as an area’s walkability bike-ability, public transit access, proximity to green space, availability of commercial and cultural amenities, and other measures of quality of life to gauge the possibilities of a project.

Below are two sample projects currently in the process of raising funds on Small Change. Both reuse existing buildings in a way that helps revitalize their local neighborhoods. 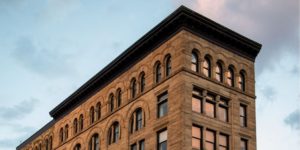 The Beauty Shoppe, a Pittsburgh-based coworking operator, and the Liberty Bank Building, a historic six story building, are together planning to reposition the building as the flagship Beauty Shoppe location. Coworking is shared office space, offering an attractive solution for many different people – from independent contractors or startups who typically work at home, to large companies wanting to establish a presence in a new city. Small Change is offering a total of 300,000 of Membership Units at a price per Unit of $1.00 to accredited investors. If this offering is fully subscribed, the total proceeds from this offering to the Company will be $300,000.

Converting the Liberty Bank Building to a coworking building will complete the next phase of this building’s storied history – from an historic bank building dating pre-1900 into an innovative hub of activity. The building ownership has retained the Beauty Shoppe, which already occupies almost 50% of the building, to operate the entire building as coworking space. Since 50% of the building is still configured as “traditional” office space, this repositioning requires changes and improvements to be made to the floors to be absorbed, so that they can function at their highest and best use. 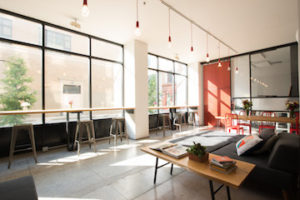 East Liberty is the historic and geographic center of Pittsburgh’s vibrant East End, a second downtown surrounded by a diversity of neighborhoods featuring Pittsburgh’s university and medical institutions, museums, and a growing technology-focused commercial sector. The neighborhood has received significant public and private investment over the past five years in continued implementation of a community plan designed to reverse a downward trend stemming from massive urban renewal projects in the 1970’s. The Liberty Bank Building is within a half-mile radius of a variety of new projects including Whole Foods Market, the Bakery Square mixed-use development featuring large technology companies Google and Adobe, new hospitality projects such as the Ace Hotel, Indigo Hotel, Spring Hill Suites and Hyatt House, and national award-winning restaurants such as The Whitfield, Livermore, Dinette, Stumptown Coffee, and Zeke’s Coffee. In addition, there are significant new residential developments at Walnut on Highland, Eastside Bond, and Bakery Living.

Marlboro Pike is a 44-unit, multi-family residential apartment complex located in Capitol Heights, Prince George’s County, Maryland, less than a mile from the District of Columbia. The property sits along a major, neighborhood-connecting arterial and consists of two buildings, with four separate addresses and entrances. 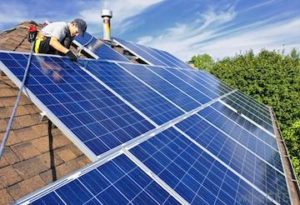 The developer plans to upgrade the cash flow, efficiency and value of the property in a number of ways, including significant energy efficiency upgrades (covering all of the roofs with solar arrays) and by increasing the bedroom count of all the currently over-sized units.

Small Change is offering a total of 200,000 of Membership Units at a price per Unit of $1.00 to accredited investors for a fully subscribed offering of $200,000. Underlying financing for the building acquisition is through Enterprise Community Partners, an affordable housing lender with restrictive affordable housing covenants.

Marlboro Ventures acquired the building in early 2016. At the time of acquisition, the building contained only six vacant units, but the previous owners and management had allowed rentals to a significant number of occupants who were engaged in illegal drug and other criminal activity, including regular vandalism to the building itself.

Marlboro Ventures immediately set out to rid the building of crime by partnering with the Prince George’s County Police Department, establishing a police substation in the complex, hiring off-duty officers to stay in the building overnight, and slowly but steadily bringing eviction lawsuits against the offending occupants – many of whom, it was discovered, were not listed on the unit leases. Over the course of approximately eight months, numerous arrests were made and criminal residents were evicted from the building, leaving 21 vacancies. The building now is no longer a haven for crime, dramatically improving the safety and livability of the apartment complex, as well as the surrounding neighborhood.