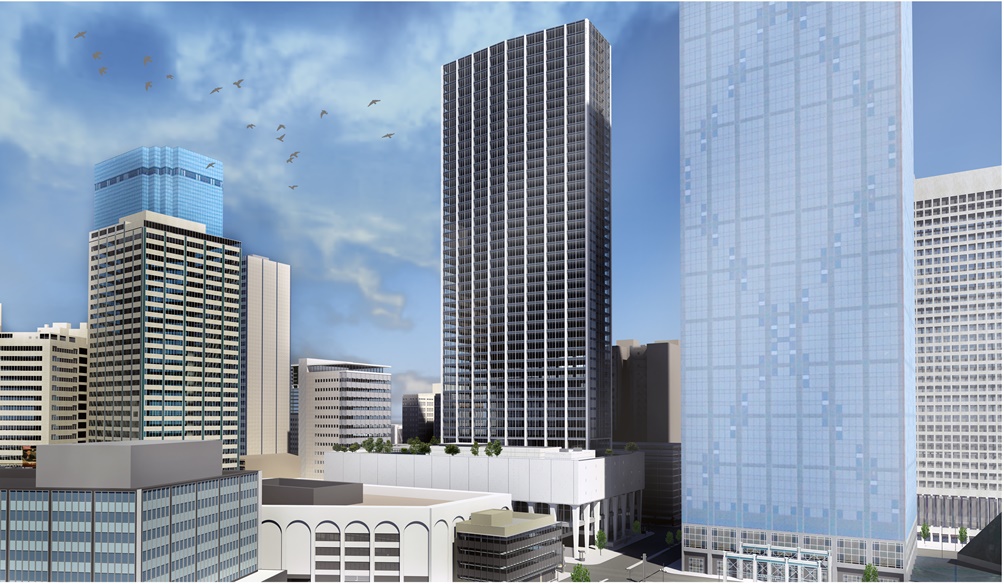 It originally was proposed to be 96 feet (29 m) higher, but was scaled back after determining it would be a hazard to flights leaving Dallas Love Field. By choosing a site with lower elevation, the tower, even with a modified height, was still taller than rival bank’s Republic Center.

Now, the top-to-bottom, $380 million renovation and repurposing of one of downtown’s largest historic skyscraper is taking advantage of the latest building restoration technology. Work crews have begun removing all the white marble from the exterior. 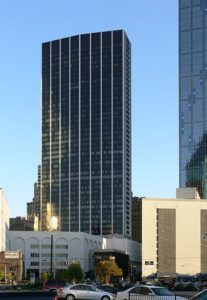 Over the next year, the stone on the outside of the 52-year-old landmark will be taken down, shipped out of state, and restored with a high-tech manufacturing process.

“This is our first real historic project — the first time we have reclaimed the stone off a building,” said Dan Slain with contractor HyCOMB USA of Florida. “We have projects scattered all over the world. “We’ve worked on the biggest shopping mall in Canada,” Slain said. “We are now doing a huge building in New Delhi, India.”

Most of the stone panels from the outside of the Elm Street tower will be trucked to Florida to HyCOMB’s plant near Miami. There’s more than a little irony in HYCOMB’s doing this historic restoration work, since their stock in trade is manufacturing phony stone veneers.

Such products are decried as a plague by many historic preservationists, who worry that we aren’t passing restorable buildings along to future generations, just flimsy structures that only look solid, and that might soon end up in landfills.

The look and feel of natural stone can’t be fully replicated either, so many folks find the cheap stone veneers that are so common on both residential and commercial buildings these days rather offensive to the eye.

On the other hand, these composite panels are lightweight and flexible, which can make a building more earthquake-resilient. And less material is used, cutting down on environmentally-destructive quarries.

Environmentalists and climate activists might also worry about the vast amount of fossil fuel that will be burned shipping these heavy materials back and forth from Texas to Florida, as opposed to the normal in situ restoration that has been the norm until now.

Once Dallas’ tallest skyscraper, the First National Bank was acquired last year by San Francisco-based Drever Capital, which is converting the high-rise into a combination of apartments, hotel rooms, retail and office space.

“We are getting about $90 million in tax credits which mitigates our cost,” owner Maxwell Drever said. “By having the tax credits, in addition to the tax increment finance district incentives, we were able to make this a quality project. We are making the building better than it was, and originally it was first class.”

Renamed The Drever, the building is scheduled to reopen in 2019, repurposed as 324 apartments and a 218-room luxury hotel.

The tower is the tenth tallest building in the city, and has been vacant since January of 2010, when the building was closed due to low occupancy rates. The current renovation is the most expensive building conversion in the city’s history.