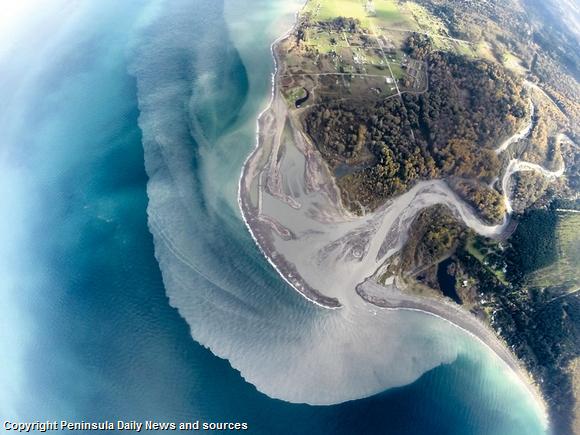 No one, not even among those studying the ecology of the Elwha River mouth, expected the degree of change seen there after the dams came down, according to a woman who has researched it for years.

An area that once was little more than large cobbles is now a vast tract of quiet, sandy beach speckled with hundreds of seabirds and brushed by ocean waves. It contains pools constantly dimpled by the jumping of fish.

Sometimes, looking at the acres of new beach — and the new life it now supports — she nearly cries, said Anne Shaffer, a marine biologist and the executive director of the Coastal Watershed Institute of Port Angeles, Washington.

The institute studies the nearshore effects of the dam removal on the ecology of the watershed, including the estuary and the Strait of Juan de Fuca waters just offshore.

“No matter who owns it, this is a community resource,” Shaffer said as she led a tour of the beaches.

Note from Storm: This is the third article on the Elwha River restoration that we’ve published here in REVITALIZATION, and it won’t be the last. I consider this one of the most iconic projects of the global restoration economy. This is partly due to the sheer size of the dams: they are the two largest ever removed. But it’s also due to the fact that their removal unclogged an entire river: it now flows unimpeded from head to mouth.

The Elwha River restoration exemplifies the three pillars of resilient prosperity: repurposing, renewing, and reconnecting. The Elwha River has had its ecology ravaged by a pair of illegal dams for the past century, when it was “repurposed” from a living resource to a source of electricity. So, it’s now being repurposed to provide the vast array of ecosystem services it was meant to. It’s being renewed by removing those two dams, and by replanting native plant species along its newly-exposed rivberbanks. Doing this is reconnecting the Olympic Peninsula watershed with the Strait of Juan de Fuca (and the Pacific Ocean beyond that), allowing salmon to migrate and spawn for the first time in over 100 years.

I keynoted a scientific conference on the Elwha River dam removals and river restoration at Peninsula College in Port Angeles, WA back in 2007. Local officials kindly took me on an extensive hike of the river system, when the dams were still in place. I consider this to be one of the most important projects on Earth. This is partly due to the sheer importance of the ecosystem itself, and partly due to the example it sets for the world. Our planet’s freshwater systems have been killed or crippled by a plague of hundreds of thousands of dams. Many of them never had a good reason for existence in the first place (especially in the U.S., where the Army Corps of Engineers built thousands merely to justify its budget), and many of those that did serve a good purpose no longer do, due to sedimentation, obsolescence, or decrepitude.

I spoke with Nathan A. West, AICP, Director of Community and Economic Development at the City of Port Angeles in April of 2015. He told me that tourism and lodging taxes are at record highs since the dams came down and the river started coming back to life; a testament to the economic value of environmental restoration. What’s more, confidence in the future of the town is also at an all-time high, with Port Angeles having won both “Top 10 Cities in Washington” and “Top 10 Cities Nationwide” designations in 2014. More recently, BusinessInsider.com named Port Angeles one of the “20 coolest towns in U.S. 2015”, and mentions the Elwha River restoration as a factor in that decision.

This newly-formed beach will likely give a tremendous additional boost to tourism, hopefully benefiting the Lower Elwha Klallam tribe that lives at the mouth of this restored treasure.