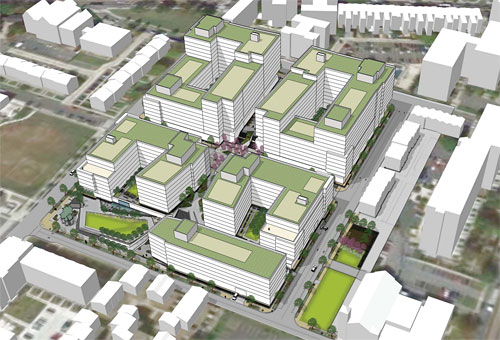 A 1968 experiment in cooperative low-income housing near Washington, DC‘s NoMa (North of Massachusetts Avenue) neighborhood will soon be the site of a large redevelopment project. The owners plan to add new apartments and retail while preserving places to live for current residents of the community.

Sursum Corda (Latin for “lift up your hearts”) was built by religious organizations using a federal Housing and Urban Development loan to provide home ownership opportunities for low-income residents.

A series of townhouses surrounded a U-shaped road. This inward focus, the designers hoped, would create a sense of community, but as urban disinvestment set in and crime rates rose amid the crack epidemic in the 1980s, the layout attracted drugs and gangs.

This project will be the latest in a string of redevelopments of public housing. The US approach to low-income housing in much of the mid-twentieth century was through large-scale “projects” that concentrated low-income residents in complexes, usually not mixed-use, often fenced in a way that cut the complex off from the general public space of the city.

Local housing authorities often also did not maintain this housing very well, and with decades having passed, a lot of it is in bad shape.

Lower-density complexes like Sursum Corda now represent an opportunity, as the market could support many more units of housing in the same space.

Therefore, at least in theory, one could redevelop the site to replace decaying housing with new housing. New market-rate housing could fund the project but still keep all of the low-income units and let current residents move back.