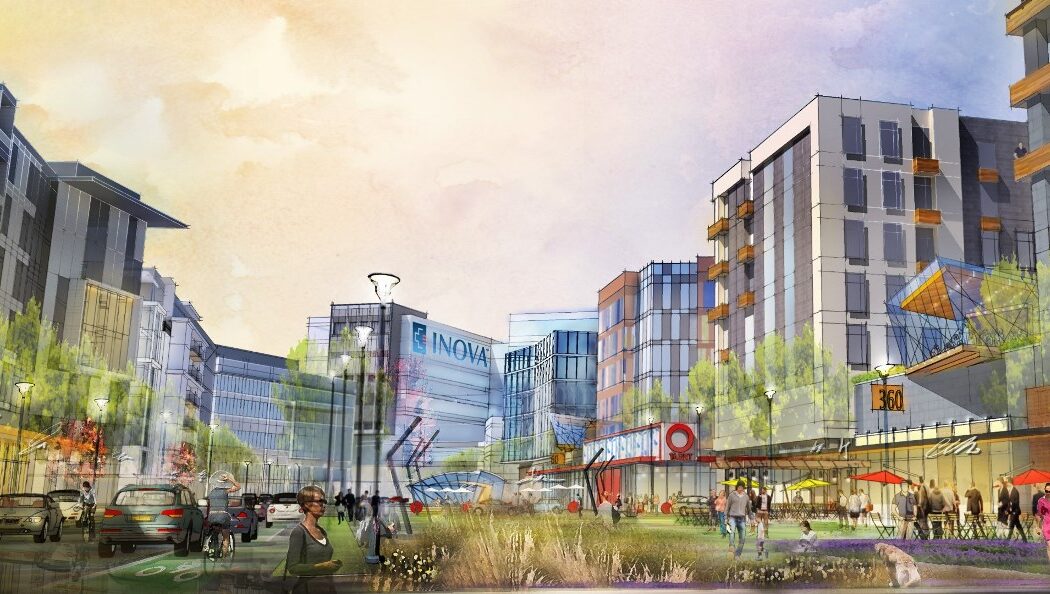 In Virginia on July 6, 2021, the Alexandria City Council unanimously approved the redevelopment agreements for the site of the former Landmark Mall, which will result in up to approximately four million square feet of redevelopment and revitalization.

The project will be anchored by the relocation and expansion of Inova’s new state-of-the-art Alexandria Hospital bringing more than 2000 health care workers to the medical campus. This transformational project—led by developer Foulger-Pratt—was recently named by the Washington Business Journal as the 2020 Real Estate Deal of the Year.

The 52-acre Landmark site is one of the most desirable large-scale underdeveloped locations remaining inside the Washington, DC area’s Capital Beltway. The project will transform the currently unoccupied mall into a mixed-use, walkable urban village and will propel the revitalization of the West End of the City of Alexandria.

The plan will result in more than $2 billion in investment in the community, including the new Inova hospital, medical office buildings, for-rent and for-sale multifamily residential units, retail, commercial, and entertainment offerings.

Additionally, the project will provide outdoor parks, a replacement for Fire Station 208, affordable housing, and a transit hub anchoring the City’s proposed bus rapid transit network, DASH, and Metrobus. Construction at the site could begin as soon as 2023, with the first buildings delivering in 2025.

“This long-anticipated project will not only revitalize a currently vacant site many had given up on and provide significant new economic activity, but will also be a catalyst for redevelopment and enhancements throughout the West End of our City. This truly transformational redevelopment of the Landmark mall site will provide a new, modern hospital facility where Inova can continue to provide world-class care to our community and to the region. In addition, the much-needed mixed-income housing; new municipal facilities and services; and new open space will come together at this site to support and enhance the health, wellness and quality of life of the West End and our entire community for generations to come,” he added.

“Tonight’s approvals represent a critical milestone in the transformation of Alexandria’s West End,” said Cameron Pratt, CEO of Foulger-Pratt. “We are grateful for the collaboration between Foulger-Pratt, Inova, and the City, as well as the trust placed in us by our partners – Howard Hughes Corporation and Seritage Growth Properties. We look forward to bringing this long-anticipated project to fruition.”

For more than a year, Inova has been developing a plan to meet the health care needs of those who live in its Eastern Region (Alexandria, Mount Vernon, and Springfield), including options for the modernization of Inova Alexandria Hospital.

As the new location for Inova Alexandria Hospital, the Landmark site will allow for comprehensive, patient-centered programs and services that include a larger emergency room; private patient rooms; and the Inova Schar Cancer Institute at Alexandria Hospital, which will offer full cancer services, including radiation and infusion.

“We are thrilled that Council’s action tonight officially paves the way for us to move forward with building a new state-of-the-art hospital and medical campus, one that will expand access to our seamless system of care, enhance our services, and elevate the healthcare facilities in Alexandria and the Northern Virginia region for decades to come,” said J. Stephen Jones, MD, FACS, President and CEO of Inova.

The hospital will be one of only four Level II trauma centers in Northern Virginia, (eight statewide, and 270 nationwide), providing 24-hour specialty services for brain injuries, complex fractures, and other trauma care. The addition of a medical office building will allow an estimated 50 specialty physicians to see patients on the same campus as the new hospital.

The new facilities at Landmark join the broader plan for Inova’s Eastern Region, which includes the previously announced construction of an ambulatory facility that will become an integral part of Alexandria’s Oakville Triangle/Potomac Yard community, which was created on the site of a railroad brownfield…formerly the largest dead zone in the city.

As part of the collaboration between the City and Inova, the Alexandria City Council also approved a master plan amendment and rezoning of the current Inova Alexandria Hospital site on Seminary Road to permit a variety of residential uses, which will facilitate the sale of the property in advance of its relocation to the Landmark site. This land-use decision was the first legislative action by Council required to bring this plan to reality.

These investments are expected to generate over $1 billion in City tax revenue over the 30-year life of the bonds, which will cover the principal and interest on the bonds as well as contribute to public safety, schools, human services, transportation, environmental protection, and other expenditures in the City’s general fund.