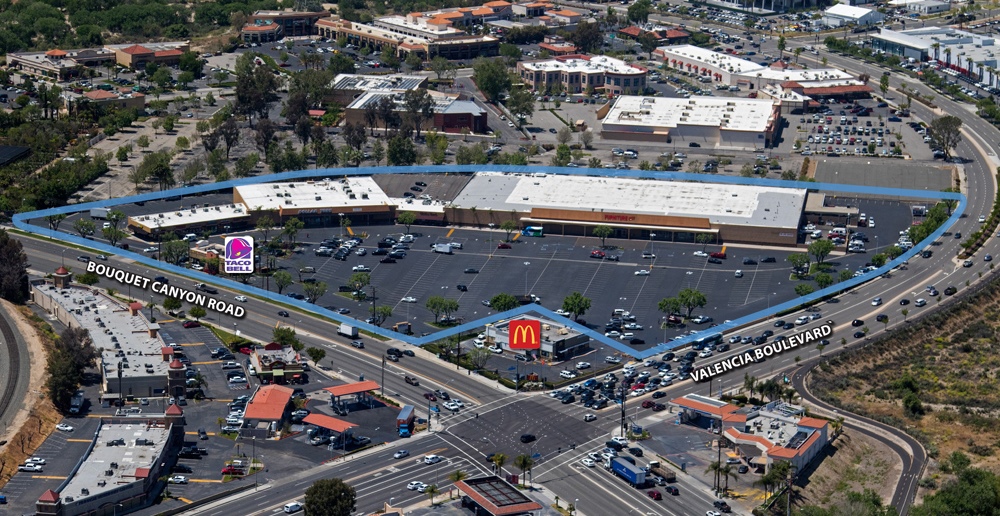 On June 6, 2018, Hanley Investment Group Real Estate Advisors announced that the firm has been awarded the listing of a 12.60-acre former Kmart-anchored shopping center property located in the heart of Santa Clarita, California.

The property, owned by a private family, is situated within the MXC Mixed-Use zoning corridor of Santa Clarita, which allows up to 30.0 units per acre for residential with ground-floor commercial (1.0 max for floor area ratio (FAR) commercial), according to Hanley Investment Group. Executive Vice President Carlos Lopez and Vice President Lee Csenar are the exclusive listing agents and are marketing the property for sale unpriced.

“The offering provides a buyer with the rare opportunity to purchase a development site of this size within the core of Santa Clarita,” said Lopez. “Due to the short-term nature of the leases in place and the mixed-use zoning, there is tremendous flexibility and the potential to be creative for potential developers and the city of Santa Clarita. For example, the property could be developed as 100 percent retail or a combination of retail and residential.”

The property is located at 23126-23170 Valencia Blvd., at the busiest intersection in Santa Clarita, Valencia Boulevard and Bouquet Canyon Road, which has 100,000 cars per day. The 12.60-acre site currently houses a 120,559-square-foot shopping center built in 1972. Taco Bell is located on a single-tenant outparcel as part of the offering.

“All existing leases will expire by 2024 (except Taco Bell’s lease), allowing an investor to collect annual cash flow while obtaining entitlements,” said Csenar. “Taco Bell’s lease expires in 2032, which allows an investor to individually parcel and potentially sell it separately to take advantage of historically low cap rates.”

The property benefits from being located near entertainment, employment, education, shopping and dining options including Westfield Valencia Town Center, which has over one million square feet, 200 stores, and two outdoor shopping districts. College of the Canyons, a 153-acre community college with 17,150 student enrollments, and California Institute of the Arts, a private arts college known as CalArts with 1,500 student enrollments, are also nearby.

The property is also convenient to Henry Mayo Newhall Hospital, a 238-bed hospital and trauma center and one of Santa Clarita’s largest employers with 1,948 employees, and Six Flags Magic Mountain, the top employer in Santa Clarita with 3,200 employees and four million visitors annually. Valencia Auto Center, one of California’s largest auto centers with 24 brands serving the Santa Clarita Valley, Thousand Oaks, and nearby Los Angeles cities, is less than a mile away.

“Santa Clarita is one of the fastest-growing communities in the region with approximately 215,000 residents within a five-mile radius of the property and has an average household income of $121,000 within a one-mile radius,” said Lopez. “In 2017, the city of Santa Clarita issued 5,782 permits for more than $365 million of new construction. Santa Clarita is strategically positioned with proximity to the San Fernando Valley, Downtown LA, Burbank Airport, and LAX.”

The city of Santa Clarita has consistently garnered a variety of honors including being ranked #20 (out of 550 cities) as one of “America’s 50 Best Places to Live” by Wall Street 24/7 based on employment growth, access to restaurants and attractions, and housing affordability, and one of the Top 100 Safest Cities in America by the National Council for Home Safety and Security.

Among cities with a population size of 200,000 or more, Santa Clarita ranked as the third safest city in America last year. The city has also consistently ranked as one of the top Business-Friendly Cities by the Los Angeles County Economic Development Corporation and is ranked #21 in California for the most retail spending at over $2 billion ranking higher than Beverly Hills, Pasadena, and Burbank.