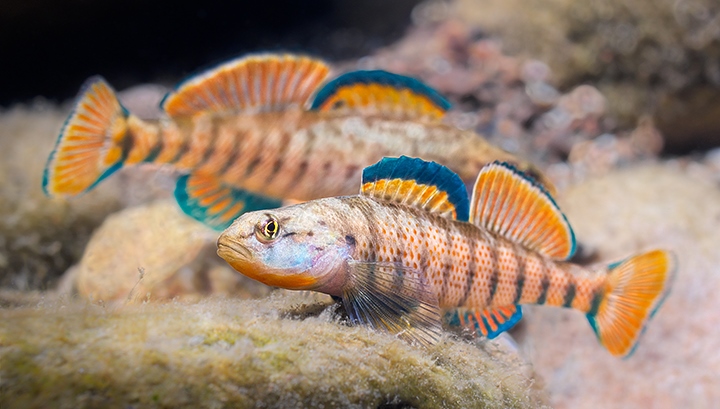 In Arkansas, the gorgeous little fish known as the yellowcheek darter is a sculpted creation of the hills. It evolved and formed in channels carved by the Little Red River long before such things were recorded.

In fact, it ONLY occurs in the state of Arkansas, and only in the Little Red River. It inhabits medium-sized and smaller rivers in rocky riffles with strong current. This species can reach a length of 7.2 centimetres (2.8 in) TL though most only reach about 4.9 centimetres (1.9 in).

Thanks to the construction of a major dam, those essential hollows flooded with what was lapping lake water, the vigorous streams that make up the river were disconnected, destroying a large portion of the yellowcheek’s native range.

Those upper tributaries of the Little Red—the Archey, Middle, South and Devil’s forks—are the only places on Earth where you can still find a yellowcheek darter, which can’t survive in a lake or in the frigid flow released below a dam. The U.S. Fish and Wildlife Service listed the yellowcheek darter as endangered in 2011, and it’s still on that list.

Back in 2001, a group was called together by Don Richardson, then mayor of Clinton, Arkansas. It included representatives from the Arkansas Game and Fish Commission, the U.S. Fish and Wildlife Service, and the Arkansas Natural Resources Commission, among others.

USFWS representatives saw what could be an opportunity for stream-habitat restoration, which would benefit the yellowcheek darter, a species not then officially listed as endangered but fading fast, and other threatened species.

The Little Red River watershed is home to at least 20 other species of interest, including the endangered speckled pocketbook mussel and the rainbow darter (pictured above). The service decided to fund a study by The Nature Conservancy on the feasibility of restoring yellowcheek habitat, but there was need for big money. “Finding support was tough,” says Don.

Nearly a decade later, Don joined the Arkansas National Resources Commission just as the Fayetteville shale natural-gas boom was peaking in the area. It was just the opportunity he’d been waiting for. Along with Scott Simon from The Nature Conservancy, Don suggested a stream mitigation bank with the natural-gas-extraction companies.

Mitigation banking is a system of credits and debits created to ensure that ecological loss, especially to wetlands and streams resulting from various development works, is compensated for by the preservation and restoration of wetlands, streams and other natural habitats. “When they screw up something, they can buy credits, and we can do our project,” Don explains.

The hopeful result is that there is no net loss to the environment. Don and Scott pitched the idea to Southwestern Energy (SWN), a prominent natural-gas-extraction company. They were pleasantly surprised. “Southwestern came back and said they wanted to support it all just because it was the right thing,” Richardson continued.

Now with funding from SWN to the tune of $1.8 million, The Nature Conservancy moved forward with a three-phase plan. “We’ve got two of the three phases done,” says Joy Wasson, river conservation program director with the Nature Conservancy-Arkansas. The third phase is still waiting on funding, but there is hope that SWN will step to the plate again. “We asked them about funding it,” says Don. “They didn’t say ‘no,’ but they didn’t say ‘yes,’ either.”

Today, the revitalization of the Archey Fork branch of the Little Red River has also helped revitalize the economy. It has transformed its namesake park into a regular stop, a sampling of the Ozarks for travelers heading north on U.S. 65 into the hills.

Featured photo of rainbow darters courtesy of the University of Wisconsin – La Crosse.