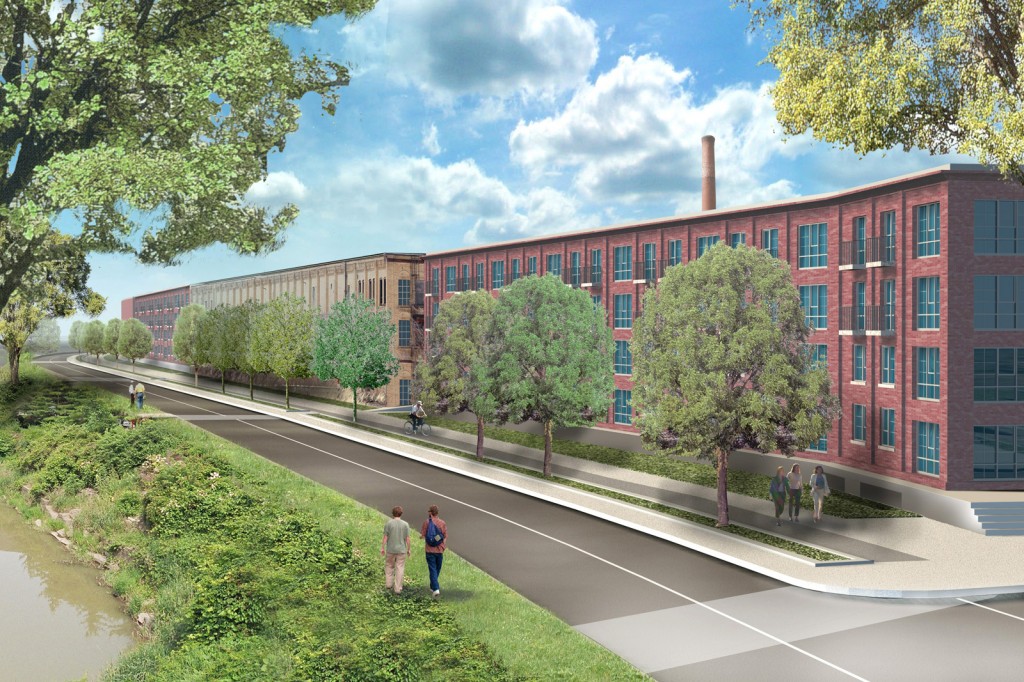 After over a decade of hard work, the soil remediation program for Brantford, Ontario’s Greenwich-Mohawk 50-acre brownfield site is complete.

Tara Tran, a senior policy planner for the city of Brantford said the project was intense and made use of many new technologies and innovative practices. “This has been a longtime coming,” she said. “This is 10 to 15 years in the making and it’s only through the commitment of this and past councillors that we have overcome challenges,” she said.

The massive project, which cost just over $40.8 million, is drawing praise from several sources. “The Greenwich-Mohawk brownfield remediation project is an example of all levels of government working together to build Ontario up and bring about good environmental, economic and land use outcomes,” said Bill Mauro, Ontario Municipal Affairs minister. “The ministry is committed to the revitalization and redevelopment of lands, and municipalities across Ontario can look to Brantford as a model to achieve results.”

The province of Ontario provided $5 million to assist in the remediation, and another $12 million was provided by FedDev Ontario, a fund administered by the Canadian federal government. The city also received a $23-million loan from the Federation of Canadian Municipalities (FCM) Green Municipal Fund, plus a $512,520 grant from the same fund for the project. The city contributed just over $1.87 million of its own money to the effort.

To date, 148,900 cubic metres of contaminated soil has been excavated. Of this 35,740 cubic metres (24%) was above the original remediation estimates. In terms of sustainability: 73% of the contaminated soil was treated on site and reused, and only 27% of soil was disposed offsite. The installation of a Waterloo Barrier wall is also now complete. The purpose of the Waterloo Barrier wall is to address the last 5% of soil remediation in an area that was too odorous to excavate.

BROWN+STOREY worked as part of a team hired by Terrasan Environmental Solutions to prepare a master plan-level development proposal for the Greenwich Mohawk brownfield site, a former industrial district that once hosted factories operated by Massey Harris and Cockshutt Plow.

Canal Gardens was an ambitious proposal to restore this 50 acre site to an honoured status within the City of Brantford by employing the highest architectural standards alongside the latest innovations in remediation technology. The proposal would reconnect the recently derelict and abandoned zones of this industrial district back into the normal life of the city.

Working with a unique wedge shaped site formed by an historic pre-1840 canal and early trail, and further divided by a still-operating railway spur, this was a challenging site. Our proposal was to encircle the new neighbourhood with a generous linear park that immediately transforms the forbidden nature of the site through an inviting and calibrated system of green open spaces that not only encircle but serve as an internal framework. This green framework was to include laneways, commons, pedestrian routes, squares, neighbourhood parkettes, wetland park, a large community park and terraced berm, working together to mediate and integrate the neighbourhood into this challenging geography. 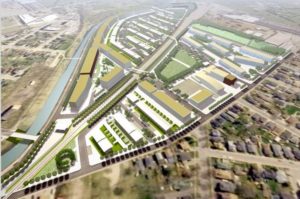 The particular geometry (a double bow divided through the middle by the railway spur) of the site inspired an innovative response of east-west bowed streets in the north precinct mirroring the canal, and north-south streets in the south precinct knitting into the existing residential fabric to the south.

Where these geometries meet at the existing spur line, a broad linear greenway knitted the two sets of streets, open spaces and housing into a generous green linkage which in turn connects to a natural trail system of the city. The remaining historic buildings (most had been destroyed by fire in the decade previous) would be restored to a new home for the Canadian Military Heritage Museum and the Canadian Industrial Heritage Centre, and to an allotment of generous loft units.

The Greenwich-Mohawk Brownfield Site is a 50-acre brownfield site located in the Southeast area of Brantford. The site is a land assembly of 3 properties municipally known as 22 Mohawk Street (7.5 acres), 66 Mohawk Street (15.9 acres), and 347 Greenwich Street (28.3 acres). The site is bisected by the Toronto, Hamilton, and Buffalo (TH & B) Railway Spur line. All three properties are owned by the City of Brantford. Once considered the heart of Canada’s farm manufacturing industry, the brownfield area boasted thriving industries such as Massey-Harris, Massey-Ferguson, Cockshutt-Plow Company, and the Adams Wagon Factories. These industries have since vacated the property and today, the site sits in a largely abandoned state. All of the buildings on 22 Mohawk Street have been demolished. At 66 Mohawk Street, the only remaining buildings are the former office/warehouse and timekeeper’s buildings for the Cockshutt Plow Company, which have been designated under the Ontario Heritage Act. On 347 Greenwich Street, all buildings have been vacated except for one that is occupied by the Canadian Military Heritage Museum.

As part of the City’s brownfield initiative, the remediation and redevelopment of the Greenwich-Mohawk brownfield site was identified as a priority for municipal investment to initiate private sector interest. In 2002, the City commissioned the “Greenwich-Mohawk Streets Brownfields Sites Remediation Study”, which examined the opportunities and constraints of the property in its existing state. The study was approved by Council in 2004 and has since guided the City in all of its actions carried out on the site.

Throughout the property acquisition process, the City worked to remove barriers to development on the site. This included eliminating the existing liens and tax arrears on the property, demolishing unsafe buildings, as well as removing debris, combustible materials, and underground storage tanks. Additionally, the City has carried out further environmental and structural investigations in a number of areas throughout the site.

As part of its Five-year Official Plan review programme, the City examined the Greenwich-Mohawk site, and proposed policy specific to these lands. In 2007, the City of Brantford Council approved Official Plan amendment (OPA) 125, which addressed a range of items including proposed policy for the Greenwich-Mohawk site. The proposed policy re- designated the lands from “General Industrial” to a land use designation that permits residential, commercial, open space, and cultural uses. This re-designation was accompanied by a justification study completed as part of the review process. The Provincial Ministry of Municipal Affairs and Housing approved OPA 125 in late 2008; however, the entire amendment was appealed to the Ontario Municipal Board. At this time, the Appeal remains outstanding (January 2010).

The City has obtained financial support in the amount of $12 million from the Federal Government and $5 million from the Province of Ontario for the remediation of the lands. The City has a Brownfield Sites Community Improvement Plan in place and a Brownfields Financial Tax Incentive Program that can provide financial assistance towards the redevelopment of the lands.

The City has completed demolition of the existing vacant buildings on the site, with the exception of the Timekeepers Office Building and Timekeepers portico, and the Canadian Military Heritage Museum. The Museum will remain on site and is currently open and accessible to the public.