Wichita is the largest city in Kansas, with a population of about 645,000. It sits in south-central Kansas on the Arkansas River.

After decades of unplanned (or badly-planned) growth based on sprawl, Wichita officials are finally looking at ways to grow economically via infill development in the urban heart. 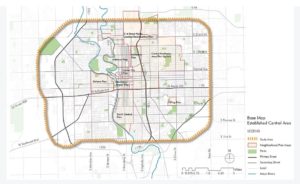 City leaders want to revitalize what they call the “established central area.” The area encompasses about 40 percent of Wichita, but its redevelopment has traditionally been neglected in favor of new development at the urban fringe.

“You go through the center of town, and parts of it, they’re just … distressed,” says Mary Hunt, principal planner for the Wichita-Sedgwick County Metropolitan Area Planning Department. “The investment isn’t going in there. “So we want to devise a plan to encourage the development inside our city’s central area.”

The Wichita Urban Infill Strategy—now called the “Wichita: Places for People” plan— originated in the city’s long-range 2015-2035 Community Investments Plan, and the city formed an advisory committee to work on the issue.

Wichita, through the policies and strategies identified in the Community Investment Plan, wants to focus future development activity on infill and redevelopment within the defined Established Central Area, or “ECA”.

Note from Storm: Unfortunately, sprawl (reportedly) isn’t yet being discouraged, leading to the sort of schizophrenic development described in the Resilience Success Guide. As long as this situation remains, efforts to revitalize the downtown will be undermined.

Downtown revitalization is best achieved when the downtown becomes the easiest and most profitable place for real estate developers to operate. This often requires eliminating indirect sprawl subsidies, such as not charging developers the full cost of providing public infrastructure. Since infrastructure is already in place downtown, that one policy change can shift the focus of investment to the urban core.

All images courtesy of the City of Wichita.