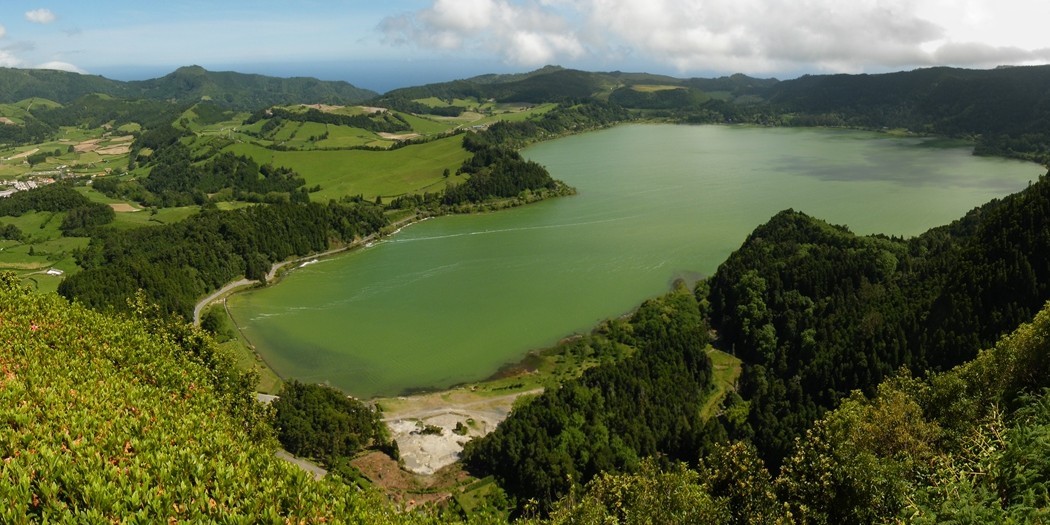 The Azores is officially known as the Autonomous Region of the Azores, one of the two autonomous regions of Portugal. It comprises nine volcanic islands in the North Atlantic Ocean about 1,360 km (850 mi) west of continental Portugal.

Its main industries are agriculture, dairy farming, livestock ranching, fishing, and tourism, which is becoming the major service activity in the region.

Mount Pico, on the island of Pico, is the highest point in Portugal, at 2,351 m (7,713 ft). The Azores qualify as some of the tallest mountains on the planet, measured from their base at the bottom of the ocean to their peaks, thousands of feet above the ocean.

The climate of the Azores is very mild for such a northerly location, thanks to the Gulf Stream.

The intensification of dairy farming in recent decades has led to the eutrophication of Furnas Lake in the Azores Islands of the East Atlantic.

To restore its water quality, a legally binding Furnas Watershed Plan was adopted in order to effect a major change in soil use. It was the turning point in the landscape management and economic activities of the last few decades.

Since 2007, about 300 hectares (750 acres) of agricultural land within the watershed were purchased by the Government of the Azores. This enabled the management team to implement an ambitious restoration plan.

There have been many concrete achievements since 2007, and the project is ongoing, with no set conclusion date. The Committee of Ministers of the Council of Europe recognised the great value of the project. The Furnas Landscape Laboratory represents an example of good practice which will be useful to other countries.

The regaining of water quality, the return to a kind of agriculture more respectful of the natural substrate, and the eradication of invasive species are the project’s strong points. The project, which certainly corresponds to the spirit of the European Landscape Convention, gives off a feeling of high energy.

Activities were on a huge scale and required numerous resources, provided by many volunteers and, to some extent, European Structural Funds. ^^^^^^^^^^^^^^^^^^^^ Note from Storm: Miguel Ferreira (the team leader and author of this report) and I have been working on adding this story to REVITALIZATION for almost a year. I’m happy to present his full 54-page report now.

Miguel Ferreira is a young and dynamic Forester Engineer and Natural Resources Manager from the Azores islands. He pursued his studies in Lisbon (Portugal), and later complemented these with a second masters in Urban Forestry & Urban Greening at renowned universities in Denmark (LIFE-Copenhagen) and Sweden (SLU). The knowledge gained at university has been complemented with research at the Forest and Landscape department in Denmark, and other work and travel experiences through over 30 countries. These experiences gave him a unique understanding of integrated and coherent landscape management, focusing ecological, economic and social sustainability. At 26 years old he started the project Furnas Landscape Laboratory that under his management had a large public involvement with numerous partnerships and came to win 2 National Awards in Portugal, and international recognition.

While many around the world have been talking about the concept of landscape-scale environmental restoration, Miguel and his dedicated team have been accomplishing it for most of the past decade. Granted, 750 acres isn’t large by U.S., Russian, or Australian standards, but it certainly qualifies as landscape-scale in the Azores. Congratulations to all of you!