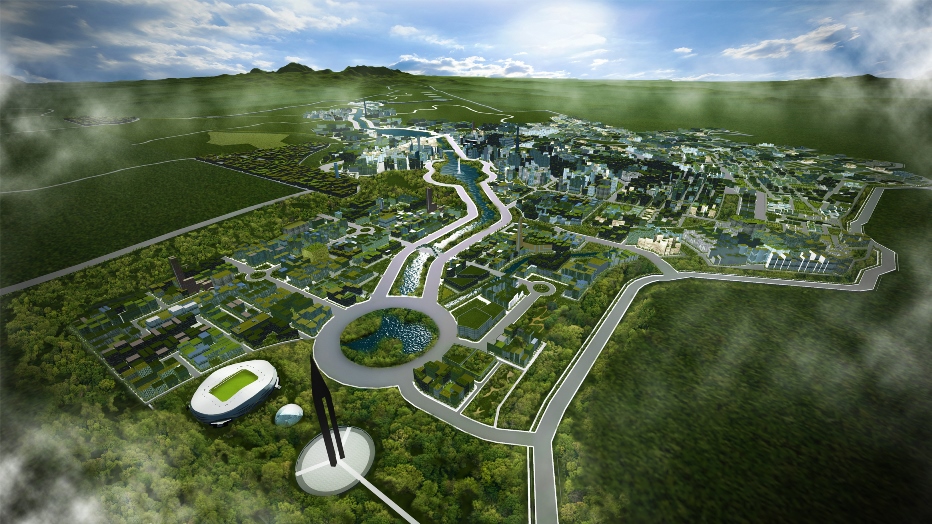 Note from Storm: All too often, when new “green”, “sustainable”, or “smart” cities are created, they forget about the importance of location. No matter how green the building or infrastructure design might be, it doesn’t make up for destroying virgin wildlife habitat, or paving over productive farm land (are you listening, China?).

That’s not the case here, though. Clark Green City is not just green in design, it’s green in location. That’s because it’s actually restorative development. Rather than sprawling onto undeveloped land, this excellent project is cleaning-up and redeveloping the defunct U.S. Clark Air Base.

Actually, Clark Green City is a continuation of a redevelopment and reuse program for the old U.S. military installation. Clark Air Base is on Luzon Island in the Philippines, about 3 miles west of Angeles City, and 40 miles northwest of Manila. Clark was created in 1903, and closed in 1991. The central base comprised 14.3 square miles (37 km²), and had military reservation lands comprising an additional 230 square miles (596 km²).

The base was important in both World War II and the Vietnam War. After the Americans left in 1991, part of the base became the Clark International Airport, the Clark Freeport Zone, and the Air Force City of the Philippine Air Force. Now, Clark Green City is making use of an addtional parcel.

What’s more, thanks to a 3 million euro donation from the German government, Clark Green City will also host a regional climate change knowledge and training center, serving the 20 most climate-vulnerable (mostly island) nations. It’s called the South-South Center of Excellence for Climate Information and Services.

Clark Green City is being developed by the BCDA Group. Here’s what they say about the project on their website: Located in Central Luzon, Clark Green City is at a confluence of industry and agriculture with existing infrastructure and connectivity to Manila and rest of the Philippines. With favorable location in the region and appropriate distance from Metro Manila, CGC is poised to become the next big metropolis.

Merging with nature, the heart of CGC is proposed to be a central park with business district wrapped around it that has magnificent views of the hills. Served by public transport, housing and industries form the other layers. A network of open spaces forms the bond between diverse mixed use districts. A destination where nature, lifestyle and business, education, and industry converge into a global city based on principles of sustainability.

The BCDA Group is a prime mover of national development. We transform former military bases and properties into premier centers of economic growth in partnership with the private sector with integrity, excellence and efficiency in the stewardship of government resources. We create sustainable urban communities to uplift the lives of Filipinos.

The BCDA Group is led by the Bases Conversion and Development Authority (BCDA), a government instrumentality vested with corporate powers under Republic Act (RA) 7227, signed into law by former President Corazon C. Aquino last March 13, 1992. The BCDA Charter was amended by RA 7917 in 1995, and further amended by RA 9400 in 2007.

The following is my July 2015 interview with BCDA executives. My questions are followed by their (slightly edited) answers:

Who had the original idea for reusing Clark Air Base in this way, and when?

BCDA has been mandated by law to convert former military bases into alternative productive uses.

BCDA President and CEO Arnel Paciano D. Casanova cast the original vision for the 9,450-acre area of the CSEZ to be the Philippines’s most modern and self-sustaining metropolis, and to address the congestion in Metro Manila. Thus, Clark Green City was born.

Master Planning activities commenced in the third quarter of 2012, and right now, BCDA is preparing for the development of the first phase of the Clark Green City (CGC) Project.

What major obstacles were encountered, and how were they overcome?

The concept of the CGC Project was to create a green, sustainable and disaster-resilient city, and become a model city to other city developments all over the country and for the future. This in itself is a challenge.

BCDA is applying global standards to the realization of the vision for CGC, while still maintaining economic feasibility and national acceptability throughout the development.

The Master Development Plan has been revised and optimized repeatedly to fully capture BCDA’s vision for CGC. The concept plan for Clark Green City is designed by AECOM Singapore, who is currently detailing its design for the project.

Could you offer any key dates and numbers that don’t appear on your website?

Is this purely a government-led project, or is it a public-private partnership? As with most of its projects, BCDA will be implementing the CGC Project through Public-Private Partnerships (P3) with several private sector partners.

This is the mode to be followed which is a critical success factor of BCDA’s first major development – the Bonifacio Global City.

Regarding the future, is it hoped that Clark Green City will catalyze other such projects, change the manner in which development occurs in your country, or have any other larger, lasting effects?

The CGC is not meant to be an isolated development, but rather an economic catalyst for Central Luzon and ultimately, the entire country.

BCDA envisions the CGC to be a model development that other cities/localities in the Philippines can emulate. BCDA intends to extend assistance to the local executives around CGC with their masterplans in order to create a synergistic regional development plan that will create greater impact to the economy.

The CGC is also expected propel infrastructure development in the country. Some benefits of the CGC in this respect are as follows: