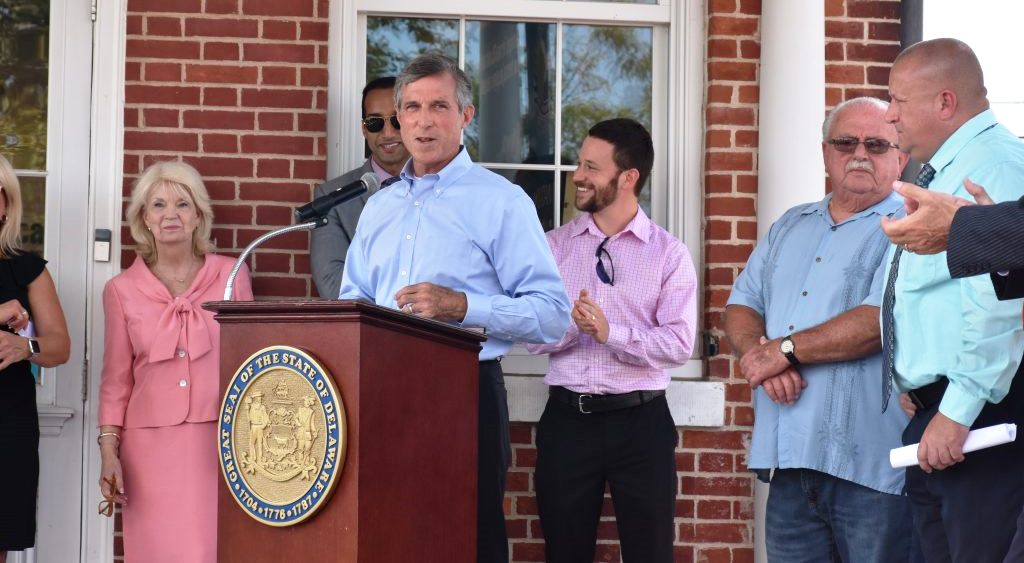 On August 19, 2019, Delaware Governor John Carney announced the latest cities and towns that will be receiving the Downtown Development Districts (DDD) designation. The program significantly builds on the state’s efforts to redevelop Delaware’s commercial business districts and revitalize them by boosting private investment in towns and cities.

The four new Downtown Development Districts are in Delaware City, Middletown, New Castle and Clayton. Investors who make qualified improvements to residential, commercial or industrial properties in those districts now may qualify for state and local development incentives, including a rebate of up to 20 percent of eligible costs upon completion of the project.

“This Downtown Development Districts designation provides a wonderful opportunity for the Town of Clayton to jump start our revitalization,” said Clayton Vice Mayor Alex Dias. “By participating in the program, our downtown is certain to prosper, maintain its character, and be the center of our community.”

“The Downtown Development Districts program is already bringing significant private investment to the eight currently designated cities and towns, and I am thrilled to welcome these four new designations to the program,” said Governor Carney. “This expansion continues our commitment to revitalizing our downtown business districts and surrounding neighborhoods.”

“The Town Council and I are committed to continuing the economic growth in Middletown, particularly within the main commercial district,” said Middletown Mayor Ken Branner. “We firmly believe this designation, combined with significant local incentives, will encourage private investment in the downtown areas that have been left out of current development.”

Since the first reservation awards in April 2015, the DDD program has been a catalyst for private investment in the eight Delaware downtowns previously designated. Those districts are: Dover, Georgetown, Harrington, Laurel, Milford, Seaford, Smyrna and Wilmington.

“We are excited about the transformation that will occur in downtown Delaware City thanks to this program. We want our residents to be able to live, work and enjoy themselves in our downtown, and this designation will go a long way to helping us achieve that,” said Delaware City Mayor Paul H. Johnson, Sr.

To date, $31.6 million in rebates through the program has leveraged $597 million in private investment in those designated downtown districts.

“The City of New Castle is honored to accept the Governor’s Downtown Development District designation, and we are excited to see the positive changes this program can have for our community,” said New Castle City Mayor Michael J. Quaranta. “Investors looking to make improvements in our city now have another incentive to help further strengthen our community.”

The DDD program is administered by the Delaware State Housing Authority (DSHA). In October, DSHA will launch a new funding round for large projects in each of Delaware’s Downtown Development Districts. Nearly $8 million in funding will be available for projects statewide. Applications to fund small projects are accepted on a rolling basis.

“We’re thrilled to work with homeowners, developers, and small business owners to drive investment in all of the newly-designated districts,” said Anas Ben Addi, Director of the Delaware State Housing Authority. “This program is already successful in the eight current districts, and we look forward to even more progress statewide.”

Governor Carney announced in February that the DDD program would expand through new district designations. Delaware’s Office of State Planning Coordination led the process to review the applications and designate the new districts. Applications were scored based on the town or city’s need for Downtown Development District incentives, the jurisdiction’s downtown revitalization plan and the creativity of its incentive package.

“All of Delaware’s towns and cities are unique, and I am so pleased that we were able to expand this program to the four diverse communities being recognized today,” said State Planning Director Constance Holland.

“The best part of this program is that it supports such a wide range of redevelopment activities so each town can thrive. This program demonstrates that the state supports all of our local governments and their visions of economically vibrant, healthy, and complete communities,” she concluded.

Photo courtesy of the Office of the Governor of Delaware.