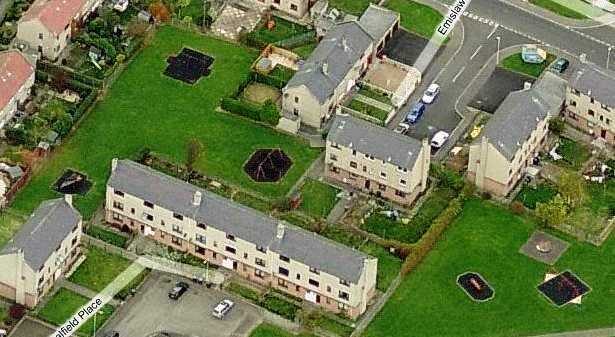 Arbroath is a former royal burgh and the largest town in the council area of Angus in Scotland. It has a population of about 24,000, and is on the North Sea coast, about 16 miles from Dundee and 45 miles from Aberdeen.

View of Arbroath by Heligoland via Wikipedia.

Now, a long-discussed £26 million housing-led regeneration in the Timmergreens public housing area of Arbroath has been approved.

A report from the head of Housing, Regulatory & Protective Services, Stuart Ball, explained the need for replacing, rather than merely upgrading, these poorly-designed and planned structures: “Although the properties meet the Scottish Housing Quality Standard and are structurally sound, they are an unpopular design. Families, single people, and elderly households are all housed within blocks which have a lack of defined private space and poor quality environmentals, such as shared deck access, communal refuse areas and low quality amenity open space. As such they do not meet the aspirations of new and existing customers.”

“Furthermore, the properties are seen as a place of last resort and this contributes to the higher than average deprivation score on the Scottish Index of Multiple Deprivation,” the report continued. “Consequently, the properties have become stigmatised which further contributes to low demand and the subsequent negative impact on resources, both financial and staff, which means that the stock is not viable in the mid to long term.”

The five-year masterplan will see 140 unpopular properties demolished, to be replaced with around 128 new houses and more-pleasingly-designed apartments of no more than two stories.

An Angus Council official claimed that the council will take into account the circumstances of existing tenancies—including residents’ rent-payment record, anti-social behavior, etc.—for the rehousing program, as well as criteria including overcrowding and medical conditions. “Wherever possible, community sustainability will be maintained by helping existing tenants to remain in the area,” they said.

To help ensure that the redevelop meets it’s goals, it has been recommended that a Timmergreens Regeneration Partnership be established, with representatives from the public, private and voluntary sectors, including tenants and residents from the development area.

The Timmergreens regeneration will contribute towards the council’s new build target of 350 affordable housing units over the next five years.