Today, a great number of Denmark’s 183 water towers stand as derelict relics of the past. Along with many thousands of similar structures worldwide, their original function as water storage facilities is now become obsolete.

Even though various strategies of reusing water towers have been successfully implemented throughout the world, there are very few examples in Denmark. At the same time, an increasingly important recycling/upcycling wave has been sweeping through both the Danish and the global design and building industries. 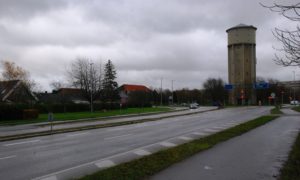 The tower as it looks today.

Just as reusing a plastic bag is far more ecologically sound than sending the plastic to be recycled—a very energy-intensive process—so too do we need to go beyond merely reusing and recycle building materials. We need to find new ways of repurposing, renewing, and reusing entire structures (both buildings and infrastructure.)

If we can do this in ways that helps solve community problems—such as affordable and/or homeless housing—then we’re really on the leading edge.

In order to tackle both the current and future housing shortage (the global population is projected to reach 10 billion by 2050, according to the UN), we need to start getting a lot more creative.

As originally documented in The Restoration Economy back in 2002, the leading edge of sustainability is restorative development. We need to repurpose, renew and reconnect what we already have to undo existing waste, contamination and fragmentation…not just slow down the rate of destruction (which is what most sustainability projects do.)

Enter Copenhagen-based architecture studio SquareOne, which seems to have an eye for spotting and developing visionary reuse ideas. They’ve figured out how to reuse those abandoned water towers structures to create both student housing and a public spa with a view. 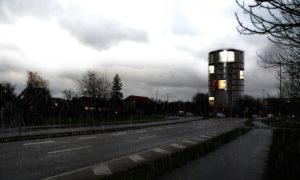 The repurposed tower envisioned by SquareOne

The local water tower is now talk of the town in Taarnby. The community is sharing their dreams of what to do with it. Will it become a restaurant, a café or even a climbing club?

Thanks to its central location near the University of Copenhagen, the Ørestad Business Hub and Copenhagen Airport, the abandoned structure allows a broad range of speculation as to how to fully tap its potential.

In February of 2019, SquareOne revealed their vision for the future Taarnby Water Tower, and many more water towers like it. Their design puts a public spa on the top floor of the tower, which harks back to its original purpose. But focusing only on the top of the tower isn’t enough to ensure the project’s financial viability: a use must be found for the entire structure.

Like most cities, Copenhagen has a housing crisis in all three categories: student, affordable and market rate. The metropolitan area is expected to add some 10,000 people annually for many years to come.

Currently, there are 9760 student apartments for 106,000 students in Copenhagen. Thus, the idea for using the rest of the water tower structure to create more student housing.

From a heritage standpoint, the tower is a treasured landmark that shouldn’t just be seen as a functional resource: its iconic character must be respected and maybe even enhanced. The SquareOne proposal therefore offers this dual strategy: the body of the tower is populated by comfortable 30 square meter living units, while the top resumes the function of a water reservoir by transforming the existing water tank into a public spa. 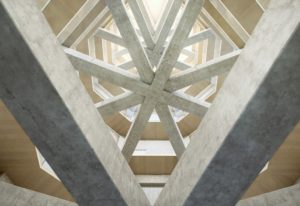 The structure’s perfectly symmetric concrete skeleton with its internal bracing beams permits to suspend the living units directly from the building to a total of 44-48 units of 30 m2.

The ground floor becomes a common seating area, as well as bicycle parking. In this way, the fascinating cathedral-like internal space of the tower reveals itself to all users.

The water tank’s two-story spa includes both the swimming tank and changing rooms on the lower portion, while the top portion becomes a fascinating spa area with a 360-degree view to the city and the airport.