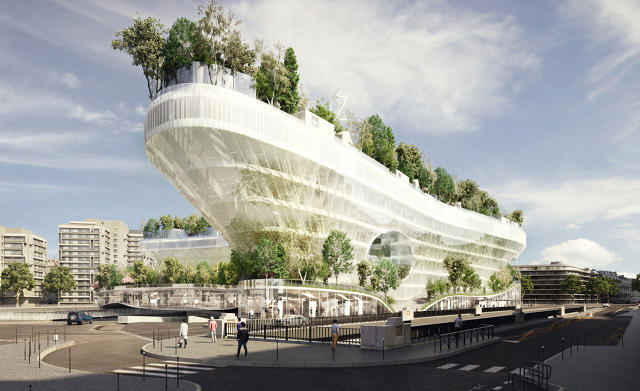 century ago, only 1 in 10 people worldwide lived in cities; today it is more than half. And as the human race becomes for the first time in its history a predominantly urban species, city planners face the question of how to arrange all these residents so that they can get around, afford homes, see doctors, and get their children educated. And not just that, but they have to figure out how to do it while emitting less carbon and spending less money.

One solution that lots of places are working on is to raise their city’s density, the number of people in a given amount of space. To raise density and pack more people into the space, cities as varied as Toronto and Kigali have recently passed laws against sprawl, forcing the city to grow upward rather than outward.

But Medellin, in Colombia, where the population tripled between 1951 and 1973, and has since almost tripled again to reach 2.4 million, has come up with something cleverer. To put a hard stop to outward expansion, a place once notorious for its drugs and gang warfare is laying out a circular garden around the city limits. Employing 5,000 people for 15 years, the garden is to be 46 miles in circumference and will also address one of the complications for a very dense city: the potential lack of green space.

Many of the best attempts at increasing density take into account the growing need to overcome lack of green space, leading to a global surge in futuristic “vertical parks.” The most famous example, the Bosco Verticale, opened in Milan in 2014. A pair of tower blocks 27 stories high, the vertical forest has a total of 900 trees all the way up every side, filtering pollution, absorbing water, and mitigating the urban heat trap.

Meanwhile Paris is building a thousand-tree park and housing development on top of a section of the city’s ring road.

The German city of Mannheim is going even further, laying out a neighborhood to have no cars at all. In fact, this neighborhood has no roads. The (affordable) houses are interlinked by treelined pathways and fruit gardens that encourage residents to come out of their houses and into the public space. Connection to the rest of the city is provided by the main road that runs along the edge of the neighborhood, and by a tram stop.