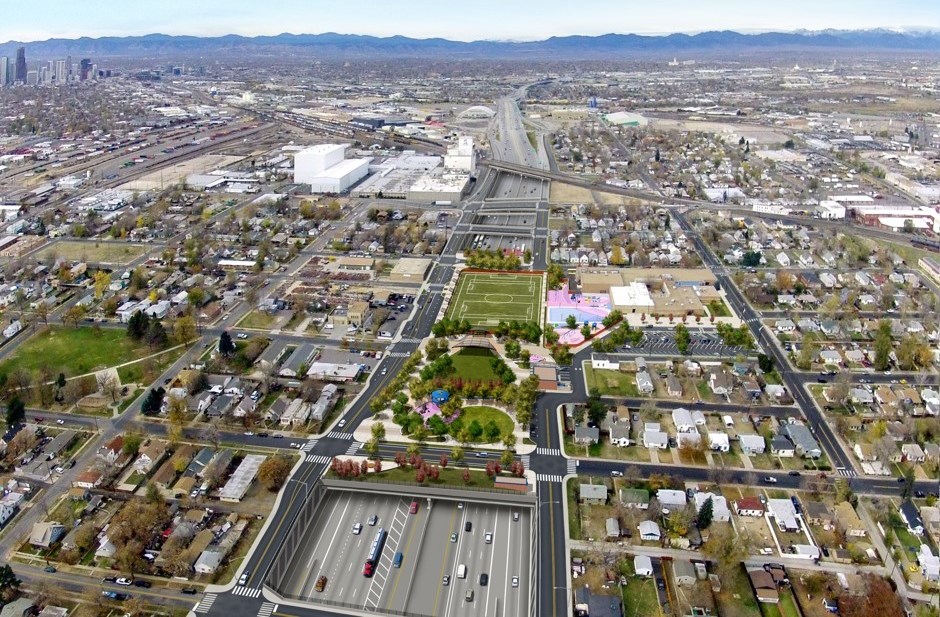 In the primarily-Latino neighborhood of Elyria-Swansea in Denver, Colorado, the playground at Swansea Elementary School sits less than 50 feet from the viaduct that carries I-70 through Denver.

In 2008, racially-insensitive highway engineers at the Colorado Department of Transportation (CDOT) proposed widening the highway in a way that would have destroyed much of the neighborhood. The plan would have relocated the school next to the railroad, where slow freight trains would frequently block the ability of students to get to their homes. 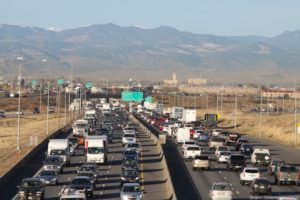 But four years later, after a huge, sustained effort by local citizens to open CDOT’s eyes to the negative social, economic, and health impacts of their poor design, the state came back with what seemed to be a brilliant alternative. They would do what so many other cities around the country have been doing with their badly-planned urban highways: bury and cap a section, in order to reconnect, beautify, and revitalize adjacent neighborhoods.

But this good idea is being badly implemented. The excellent initial design that won local enthusiasm has been substantially downgraded, serving primarily cars over people. And the local government seems to be making no attempt to ensure that the socially-vibrant neighborhood is revitalized, rather than destroyed by real estate speculators and politically-connected developers.

Many Coloradans are angry that a plan to benefit the neighborhood has devolved primarily into a plan to expand Interstate 70. They are concerned about the increased air pollution (which CDOT says it will “remove” with giant, power-hungry fans), unsolved traffic problems, and ever-worsening gentrification. The controversial project has even prompted two separate lawsuits.

CDOT says the expansion will rejoin communities, strengthen Denver’s economic backbone and bring the highway into the 21st century. But groups in opposition to the project, of which there are several, refute these claims. Denver Mayor Michael Hancock’s administration, Denver’s City Council, the Colorado Department of Transportation and the U.S. Environmental Protection Agency have all come under fire from such groups. Why the EPA? Because, according to the Sierra Club, EPA lowered their standards to allow higher rates of neighborhood air pollution, in order to avoid having to reject the highway expansion project.

Fifty-six homes and seventeen businesses are scheduled to cleared fro the path of this widening. CDOT has already started buying up and demolishing some of them. Displaced residents are being compensated, but there’s a strong sense that it isn’t enough to resettle nearby—local property values are now beginning to creep up.

Actually, make that rocket up. According to Zillow, Elyria-Swansea home values have increased more than 21 percent over the past year, and are predicted to rise another 9 percent within the next year.

Many of the parent-activists I spoke with are now afraid they might not be able to enjoy the neighborhood they fought so hard to preserve. “If they’re raising our rents even during construction, then when they finish they’ll be raising it double or triple the rates,” says Flor Vazquez, a local mother of three. She says she and her family will have to move if rents keep rising. After attending every meeting she could to save her children’s school, and to help design that lovely park, “I just hope my kids will get to play there.”

It’s telling that CDOT, a government agency created to build highways efficiently, is finally acknowledging the human impacts of their work. Environmental justice was a fringe concept two decades ago; today, it’s been the focus of the current federal administration. With grants, competitions, and sustained outreach, the outgoing U.S. Secretary of Transportation, Anthony Foxx, probably the best Secretary that agency has ever had, has pushed transportation leaders across the country to redress the economic and racial inequities urban highways created. Reconnecting neighborhoods divided by infrastructure has been perhaps his signature platform.

Highway caps aren’t a new idea: Philadelphia has been enjoying the benefits of their park-like I-95 cap–which reconnected the downtown to the riverfront–for a long time. But they’ve enjoyed a surge of interest in the enlightened national transportation climate that’s apparently coming to an end.

Klyde Warren Park in downtown Dallas, Texas, inspired the Denver lid: Opened in 2012, the park knits a five-acre green patch over an eight-lane sunken highway, attaching surface streets previously snapped apart. The cap significantly improved walkability between Dallas’ arts district and nearby neighborhoods, according to a report by the Congress for New Urbanism. “You don’t even recognize you’re standing over a highway,” says Rebecca White, the communications manager for Central 70.