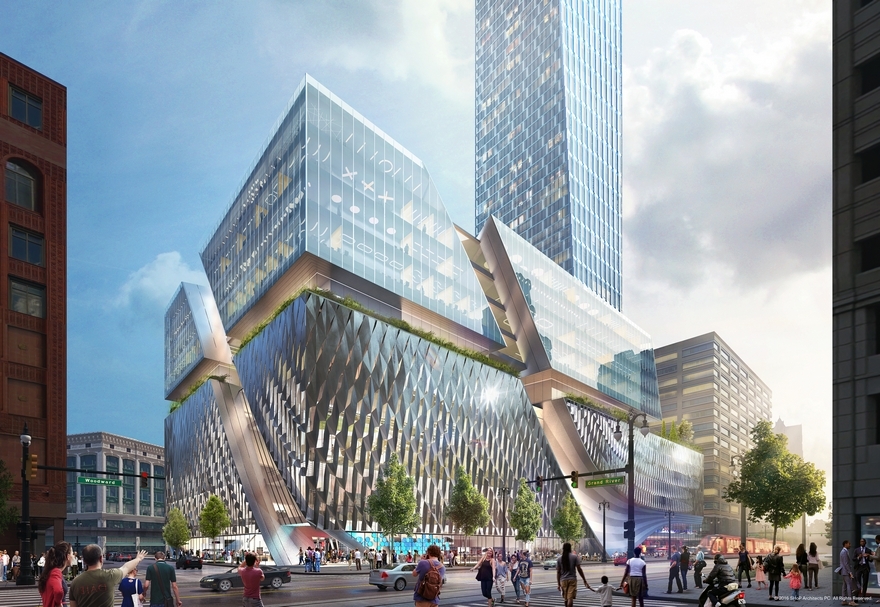 In an era of a downtown Detroit, Michigan renaissance, plans for the tallest building in the city were unveiled on February 22, 2017.

The building is part of an estimated $775 million development proposed by an entity linked to billionaire Dan Gilbert. The project for the empty Woodward Avenue block where the J.L. Hudson department store once stood is one of the most expensive and ambitious plans introduced in a decade that has seen many blockbuster deals.

The goal is for the shimmering, futuristic tower is to be a visual and economic centerpiece for the city and state. In a news release from Bedrock, Gilbert said he hoped the project would one day exceed the impact that the old Hudson’s store had on the city: “For long-time Detroiters, we remember what Hudson’s represented. It wasn’t just a department store — it was the economic engine of Detroit,” he said. “Our goal is to create a development that exceeds the economic and experiential impact even Hudson’s had on the city. We believe this project is so unique that it can help put Detroit back on the national — and even global — map for world-class architecture, talent attraction, technology innovation and job creation.”

The residential tower would rise 52 stories and sit atop a nine-story podium with soaring public spaces. The tower would rise 734 feet, a few feet taller than the Renaissance Center. Total space in the whole complex would be 1.2 million square feet.

Gilbert’s people are calling it Hudson’s for now but may come up with a new name as the project progresses. The cost would top $700 million.

The city’s Downtown Development Authority approved the plan, and gave Gilbert until November 1, 2017 to line up state tax incentives he said he needs to make the project financially feasible. If Gilbert succeeds in that, construction would begin December 1, 2017 and finish by the end of 2020.

“It is wonderful to see the tremendous progress that has been made on the conceptual design for such an historic site within our downtown,” said Eric Larson, president and CEO of the Downtown Detroit Partnership. “Not only does this continue to build on the momentum, but it will be an architecturally significant addition to our city’s skyline,” said Larson, who is also a real estate developer.” 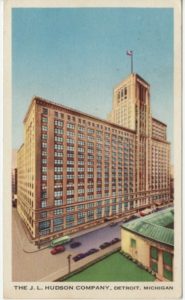 Hudson’s, or The J.L. Hudson Company, was a retail department store chain based in Detroit. Hudson’s flagship store, on Woodward Avenue in downtown Detroit was demolished October 24, 1998. In 1961, it was the tallest department store in the world and claimed to be the second largest department store (next to Macy’s) in the United States, in terms of square footage.

Founded in 1881 by Joseph L. Hudson, the store thrived during the record growth of the city of Detroit and the auto industry during the first half of the 20th century. The family also founded the Hudson Motor Car Company, which eventually became part of the American Motors Corporation, and later Chrysler.

Over time, the store grew from its beginnings in the Detroit Opera House to a 25-story building with 2,124,316 sq. ft., occupying an entire city block. Hudson’s was known for customer satisfaction and its liberal return policy and would even pick-up merchandise that customers purchased years earlier, but never used. In 1952, Hudson’s total sales were $175 million; however, it issued refunds totaling $25 million. Store executives felt this was a small price to pay for customer loyalty.

From the Bedrock website: This new, transformational development will rise from the two-acre site of the former J.L. Hudson’s Department Store. It will be a catalyst for returning the once-commercial heartbeat of the city to an economic engine once again.

The development plans were designed by New York City-based SHoP architects in partnership with Detroit-based architects Hamilton Anderson Associates. Retail, residential, parking and a community civic space focusing on technology as well as local food and culture will be among the amenities for residents and visitors alike.

This development is slated to include a 734-foot tower, which will make it the tallest building in the city, combined with a nine-story structure together totaling 1.5 million gross square feet.

Transformational developments positively impact an entire area. They attract visitors; are magnets for talent, business and investment; and create a positive ripple effect on the area around them. This results in significant economic impact for the city and its residents.