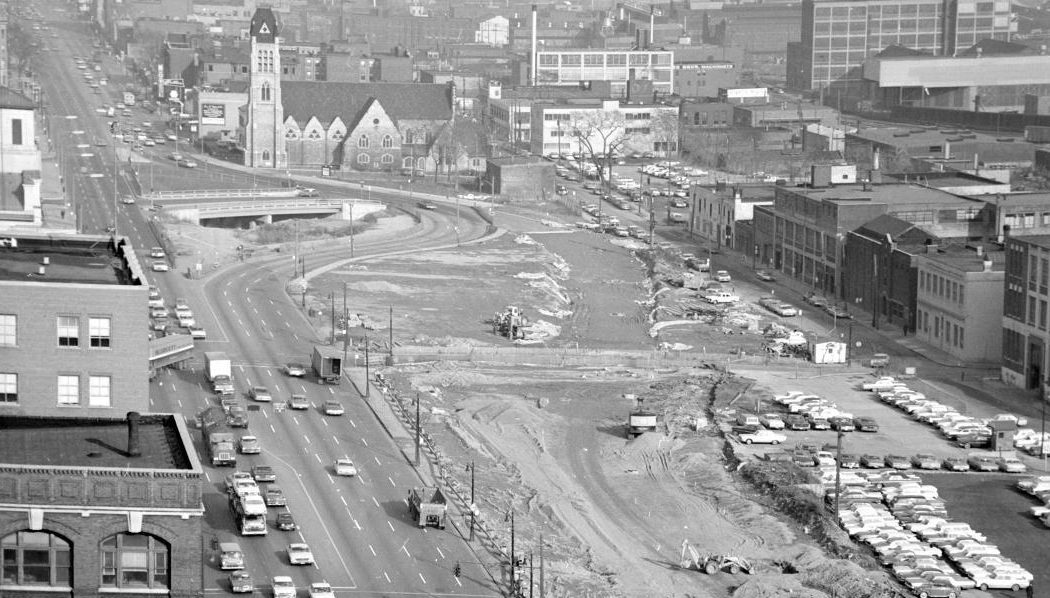 Many (probably most) American cities are plagued with badly-planned urban highways from the 50s, 60s, and 70s.

Detroit, Michigan‘s I-375 is certainly one of them. Now, like so many other U.S. cities, they are removing it. This will help reconnect and revitalize multiple neighborhoods (mostly “ethnic” and low-income) that were traumatized and fragmented by white, automobile-obsessed highway engineers half a century ago. 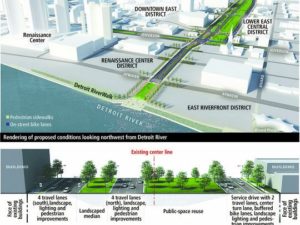 I-375 renderings courtesy of MDOT.

Interstate 375 (I-375) is only 1.062 miles (1.71 km) long. It once had the distinction of being the shortest signed Interstate Highway in the nation. It is the southernmost leg of the Walter P. Chrysler Freeway and a spur of I-75 into downtown Detroit. The freeway opened on June 12, 1964.

The Michigan Department of Transportation (MDOT) announced in 2013 that it may remove I-375 in the future. In 2014, MDOT conducted a Planning and Environmental Linkages (PEL) study for the I-375 corridor. Six illustrative alternatives were developed as a result of engineering studies and public involvement.

In 2017, funding was identified that allowed MDOT, the City of Detroit, and the Federal Highway Administration (FHWA) to launch an Environmental Assessment (EA) study. Screening criteria resulted in identifying two practical alternatives to carry forward in the study. 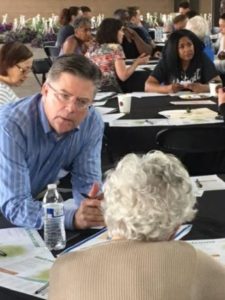 The EA will further analyze these practical alternatives, traffic operations, and social, economic and environmental impacts, and engage the public and other stakeholders who will ultimately identify a preferred alternative.

The Environmental Assessment will be a collaborative process led by MDOT that engages community stakeholders and leaders in an effort to investigate the previous alternatives and developed a preferred alternative for the corridor to provide improved transportation functions and fits into the city’s future vision.

Over the next year or two, MDOT will try to resolve the remaining questions, including the cost, which requires further study. It is roughly in the $50-million range. MDOT is also working on how to configure the interchange between I-75 and what is now I-375 once the expressway is removed.

Removing I-375 would mark the first of metro Detroit’s many expressways to be ripped out and replaced with a surface street. But multiple other cities have done that already, including Seattle, San Francisco, Milwaukee, Portland, Seoul and Madrid.

Still others, such as Philadelphia, have preserved the traffic flow but healed the wounds by “capping” the highways, often with a park.

Featured photo shows destruction of healthy, historic African-American neighborhood for I-375 in Detroit.

See article in the Detroit Free Press by John Gallagher.