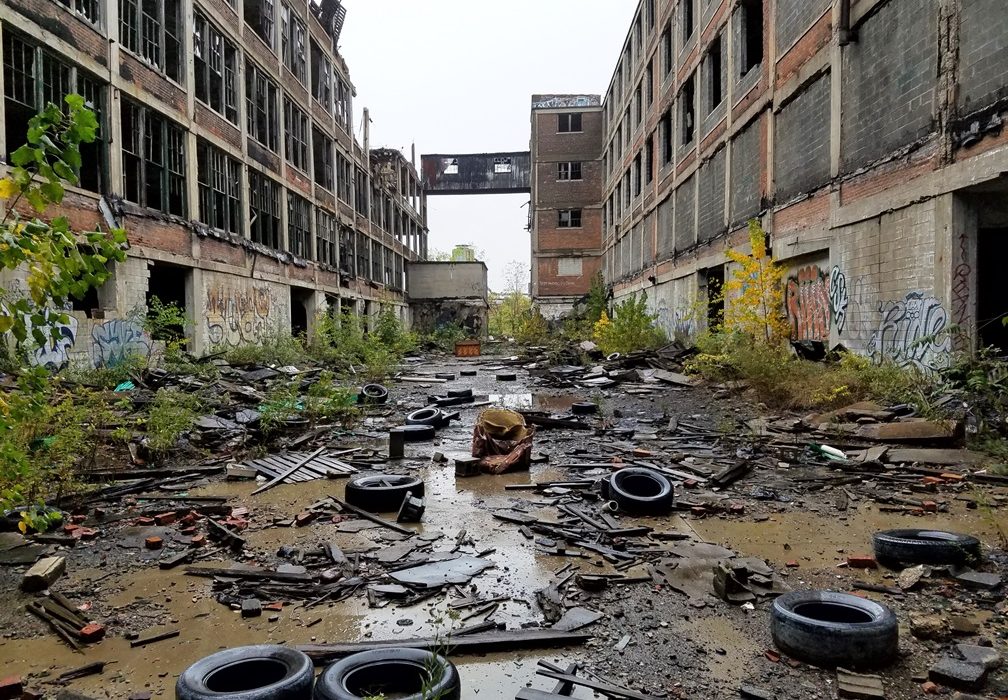 The big question Detroiters asked when the Detroit Future City framework was published in 2013 was this: Will that innovative document sit on the shelf gathering dust like numerous other studies before it, or will it actually guide Detroit’s revitalization?

The answer, fans of the DFC framework have been happy to see, is closer to the latter.

Mayor Mike Duggan‘s administration has embraced the DFC framework as its guide for thinking about the city’s many and varied neighborhoods. And the framework’s bold visions of repurposing Detroit’s vacant and abandoned land in new and innovative ways has been widely accepted as a goal, if not yet actually accomplished on the ground.

Now, the Detroit Future City Implementation Office, the entity set up to translate the guiding principles of the DFC framework into practice, has completed its strategic plan, a road map of where the office plans to go.

On November 10, 2017, they released a five-year strategic plan that brings a think-tank approach with research, advocacy and programs to galvanize Detroiters and stakeholders in continued implementation of the 2013 Strategic Framework. The organization will focus on three priority areas – community and economic development, land use and sustainability, and publications.

“As the city has rapidly changed since the release of the Strategic Framework, Detroit Future City has served as an enduring resource to guide decision making,” said Anika Goss-Foster, DFC executive director. “DFC’s five-year plan puts the Framework’s recommendations into action for our organization, partners and various stakeholders to address the opportunities and challenges facing Detroit today, while also building toward the goal of long-term sustainability for the city.”

DFC’s priority areas will be advanced over a five-year period through efforts that include advocating for innovative approaches, policies, and systems; integrating civic and community participation; and ensuring racial equity in all practices. Each of DFC’s priorities are aimed at achieving specific goals, supported by robust programs that begin addressing immediate needs in Detroit while building towards a more sustainable future for the city.

DFC’s Land Use and Sustainability priority will empower Detroit residents and stakeholders with tools and information to address issues surrounding city’s vacant land through green and sustainable practices. This will be attained through:

The Community and Economic Development priority seeks to advance employment and wealth-building opportunities for all Detroiters in healthy, affordable and diverse neighborhoods. This will be achieved through:

The Publications priority fulfills DFC’s goal to develop resources, so that Detroiters and other key stakeholders are collectively empowered with up-to-date information. DFC will regularly produce publications and reports that are based upon expert research and analysis. The publications will be used to continually inform residents and will provide the organization with the tools to advocate for the Strategic Framework’s citywide land revitalization plan. DFC is also committed to robust community engagement, a hallmark of the organization’s founding, which allows all Detroiters an opportunity to share in the recovery of the city.

“When the DFC Strategic Framework was launched in 2013, many people were excited to use its ideas for solving Detroit’s longstanding challenges. Five years later, as a nonprofit, DFC is bringing resources to neighborhoods to turn those ideas into action by residents and stakeholders,” said Laura Trudeau, chair of DFC’s board of directors. “This new strategic plan will guide the growth of our reach and impact in the next five years with a laser focus to spark improvements in more of Detroit’s neighborhoods.”

The Strategic Framework was developed with input from over 100,000 Detroiters. Soon after its 2013 release, DFC was launched as initiative to champion the Framework’s 50-year vision. In 2016, the organization officially became a non-profit, solidifying its role in impacting Detroit’s future.

In the last two years, while developing the five-year plan, DFC has been noted for its impactful programs and reports, which were early indicators of the organization’s new direction. Most notably, DFC’s Field Guide to Working with Lots tool and complementary mini-grant program has catalyzed hundreds of vacant lot transformations across the city and has seeded nearly $200,000 in grants for this work into the hands of Detroiters.

Additionally, in the last year, DFC has released several reports and publications that have been widely recognized, including the recent “139 Square Miles,” a comprehensive data report on the entire city of Detroit, as well as special reports on the city’s vacant industrial site and single-family rental housing.

“DFC has been in a unique position to incubate some of our strategies, while the board was working to develop the five-year plan,” said Goss-Foster. “We have seen how the power of our programs, information and resource can be leveraged to create change in the city and we are excited to amplify these efforts as move forward.”

With the launch of the strategic plan, DFC is also launching a new website designed to outline the priorities, programs and provide users with access to tools, including the Field Guide, publication and supports. As a nonprofit, the website also has an active support section, where supporters can donate to the organization, its research and programs, and to a fund that helps Detroiters maintain their lots developed through the Field Guide.