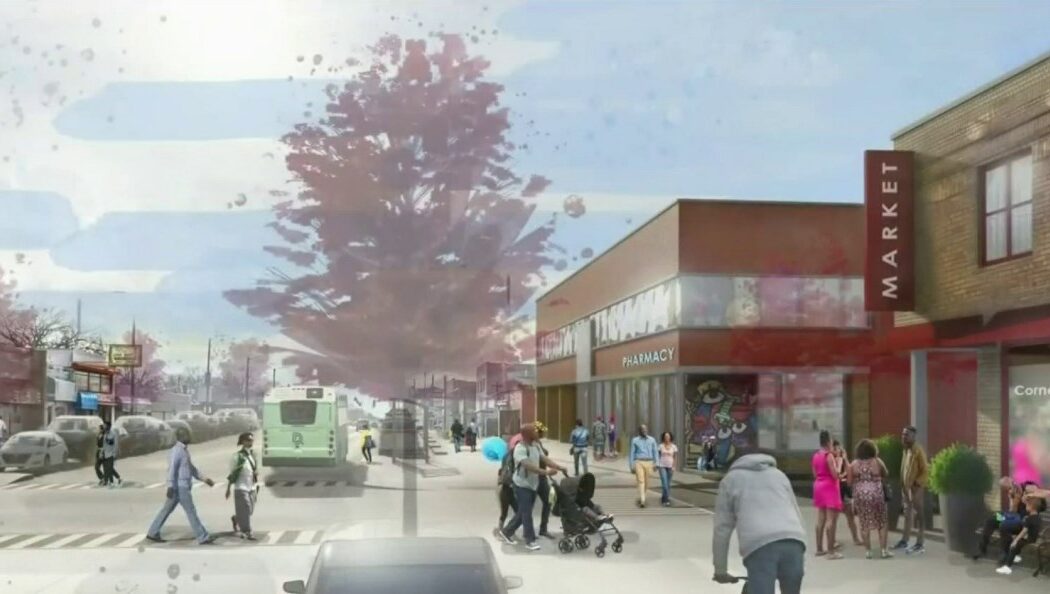 On March 16, 2021, the City of Detroit’s Planning & Development Department (PDD) made a presentation to the public that revealed its vision for bringing millions of revitalizing dollars in investment into the East Warren/Cadieux neighborhoods. This will be the eighth of 10 Strategic Neighborhood Fund plans to be completed.

“The East Warren/Cadieux corridor is an integral part of the revitalization of Detroit,” said Councilmember Andre Spivey, who represents District 4, which includes the neighborhood.

“The history of this area has a connecting line to its present activities, filled with strong neighborhoods, new businesses and improved infrastructure. The completion and implementation of the East Warren/Cadieux plan will make this area another destination for visitors and home for new residents,” he continued. 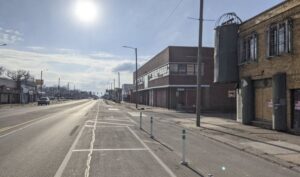 East Warren as it looks today.

The vision is focused on ensuring all residents who have stayed can take advantage of the improvements while welcoming newcomers to the neighborhood. It is also an example of how targeted public investment can help jump-start private investment in Detroit’s neighborhoods.

Now, let’s hope they have a strategic process to reliably implement that vision.

“I’d like to thank the community for helping to create and guide this plan,” said Mayor Mike Duggan.

“It is critically important that those who live in the neighborhood guide its future. This makes this effort a true partnership between the City, residents and our corporate and philanthropic sponsors through the Strategic Neighborhood Fund. Together, we are providing more opportunities for residents and making our neighborhoods better places to call home and to raise a family,” he added. 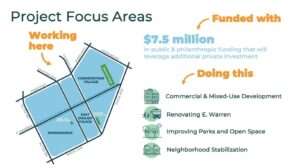 The city says that its plan represents a vision of a healthy and beautiful Detroit, built on inclusionary growth, economic opportunity, and an atmosphere of trust and cooperation between residents and the City.

The work also will build upon momentum already happening the area, which has seen half a dozen businesses open in recent years and a number of homes rehabilitated and unsalvageable, blighted homes in the MorningSide and Cornerstone Village neighborhoods demolished. The plan will see at least $7.5 million invested into the community, but the final number will likely be much higher.

The plan was developed over the course of a year and a half, and built upon in-depth feedback from the community, gathered from community meetings, weekly Zoom calls, canvassing 6,100 households, 720 respondents to surveys, 3,800 postcards, online interactions through social media, and www.ewcplan.com, and more, overcoming COVID-19 barriers in the process.

The plan has four key areas of focus:

“This plan allows us to leverage the things happening in the neighborhood and increase the quality of life and value for existing residents,” said Katy Trudeau, interim director of PDD. “This is a historic corridor for the city of Detroit, and we are excited how the plan honors the corridor’s history while supporting new businesses in the neighborhood at the same time.”

The SNF initiative was launched in 2017 in three neighborhoods, and expanded to seven more in 2018. With the expansion came investments of $5 million each from seven corporations, each partnering with a specific neighborhood. SNF has raised more than $50 million so far for the effort. Along with the Affordable Housing Leverage Fund and Detroit Housing for the Future Fund, the funds support the revitalization of neighborhoods and preserving or building new affordable housing.

The corporate partner in East Warren/Cadieux is Blue Cross Blue Shield of Michigan, whose president and CEO, Daniel J. Loepp, grew up in the neighborhood. Beyond its financial contribution, BCBSM is partnering with ChenMed to open a primary care center in the neighborhood.

“Blue Cross Blue Shield of Michigan is proudly headquartered in Detroit, and many of our employees call the city and the region home,” said Loepp. “As Michigan’s leading health insurer that serves communities throughout the state, we know how important it is for our core communities to be healthy and vibrant.”

“For 81 years and counting, we strive to be a trusted corporate citizen and community partner of choice. Mayor Duggan’s initiative provides a great opportunity to collaborate with residents and make a financial commitment that meaningfully supports needs prioritized by the neighborhood residents. We are hopeful the positive changes will continue to benefit the neighborhood for generations,” he added.

Despite COVID-19, the City made considerable progress in the other SNF areas, including community engagement, construction and preservation of affordable housing.

Streetscapes either completed or to be finished soon include Livernois, McNichols and Kerchevals streets; Butzel Park will begin a makeover soon, and Jayne Field and Zussman Park are among those recently completed. The Parker-Durand project at Kercheval and Van Dyke, which is half affordable units, is nearing completion.

The next plan to be presented to the community is the Warrendale/Cody Rouge neighborhood in District 7, in May.

All images courtesy of City of Detroit.