On June 27, 2017, the city of Detroit, Michigan announced that it had agreed to pay $4.3 million to Conrail Inc. for 76 acres of unused property. The repurposed property along the company’s rail lines will be transformed into a revitalizing greenway for pedestrians and cyclists to reconnect and revitalize adjacent neighborhoods. With this purchase, the largest gap in the city’s 26-mile Inner Circle Greenway will be plugged.

In a city boasting many large, revitalizing projects, the greenway is probably Detroit’s most efficient long-term investment in regeneration. It epitomized the “3Re Strategy“: repurposing, renewing, and reconnecting that has driven so many other dramatic turnaround stories. By repurposing and renewing these disused rail properties as trail, the greenway not only reconnects the city to its riverfront: it also reconnects neighborhoods to each other, decades after they were severed and devitalized by badly-planned urban highways. 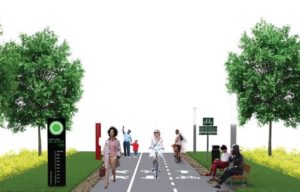 Possible design of new trail.Image via City of Detroit.

Conrail Vice President and Chief Counsel, Jonathan Broder, noted “Conrail has been part of the Detroit community for decades, and we’re so happy that this deal will help to further improve the community for generations to come. As a small contribution to this effort, we’ll be putting $500,000 from the sale into an escrow account to contribute towards remediation work along the route.”

“We have a vision to complete a bike greenway around the city that would basically link all neighborhoods in the city to the riverfront so that 10- and 12- and 14-year-old kids can be part of the downtown riverfront experience,” Mayor Mike Duggan said on June 22, 2017. This Conrail property purchase has been “years in the making,” he explained, with more such purchased to come as work continues to complete the $21 million, 26-mile loop. “Residents will have a safe and reliable non-motorized path of greenways and bike lanes connecting them to the river front, eastern market, parks across the city and more,” Duggan continued.

“I think what’s great about it is it brings a trail similar to the Dequindre Cut or Riverwalk out into the neighborhoods, into other areas that haven’t seen this kind of investment,” enthused Todd Scott, executive director of the Detroit Greenways Coalition, which has collaborated with the city on this work.

The new trail will connect dozens of Detroit neighborhoods to parks and small businesses around the city. The vision for the completed Inner Circle Greenway includes “bike lanes, pedestrian paths, seating, lighting, public safety elements and other amenities,” said the city in a news release.

The greenway traverses five of the Detroit’s seven City Council districts, integrating both present and future connectors like the Southwest Detroit Greenlink, the Detroit RiverWalk, the Dequindre Cut, and the Iron Belle Trail.

Following the expected approval of the Detroit City Council and Conrail’s board, the design and construction process is likely to start in the fall of 2017.

The city also hopes to raise funds that would allow them to do a complete inventory of city-owned land that could be similarly repurposed and renewed to better-connect pedestrians and cyclists to the greenway. “What we want to do is study some of the adjacent land uses to see if the park might be extended (near the pathways),” says Maurice Cox, Detroit’s director of planning. He stated that an RFP (request for proposals) will be issued later in 2017 to create a framework for adding larger parks to the greenway to help reconnect local neighborhoods.

The 7.5 mile stretch runs along the historic Detroit Terminal Railroad that supplied resources and parts to assemble Ford Model T automobiles. The property runs through dozens of neighborhoods in Detroit, and also through Highland Park and along the Detroit’s border with Dearborn. It will feature bike lanes, pedestrian paths, seating, lighting, public safety elements and other amenities.

“Premiere recreational opportunities are essential to continuing to make Detroit a great place to live, work and play,” said Keith Creagh, director of the Michigan Department of Natural Resources. “The Inner Circle Greenway will help connect neighborhoods and provide residents fresh opportunities to get healthy and have fun. We appreciate the commitment from the City of Detroit and Conrail to make this agreement a reality.“

The goal of the greenway is to connect neighborhoods previously separated by freeways and disjointed transit via pedestrian and bike paths. The greenway will connect residents to small businesses and commercial corridors previously too difficult to access by foot and will also connect residents to public open spaces like Palmer Park, Clark Park, Lasky Park and the riverfront. The greenway runs through a number of neighborhoods, including Russell Woods, Fitzgerald, and Banglatowns. Residents in these neighborhoods will be able to use the Inner Circle Greenway to travel safely and efficiently all the way from 8 Mile to the riverfront.

The greenway will improve transit opportunities for Detroiters, especially the 25 percent of residents without access to cars, providing reliable, safe, and affordable routes vital to accessing transit, jobs, training centers, neighborhood services, and civic amenities. Several employers are located on the proposed routes, including universities and health care systems. Service providers Focus: HOPE and the Neighborhood Services Organization are also along the greenway.

About the Detroit Greenways Coalition:

VISION: is a strong, healthy, vibrant City of Detroit and region where a seamless network of greenways, green spaces, blue ways and complete streets is an integral part of people’s active lifestyle including day-to-day transportation and recreation.

The Detroit Greenways Coalition (DGC) works to promote and build a network of greenways and bike lanes that will connect people and places, improve the quality of life, beautify neighborhoods, and stimulate neighborhood-level economic development in Detroit.

MISSION: is to create, conserve and promote greenways and green spaces in order to connect people, places and nature.

We will collaborate to create a city-wide and regional Greenway vision, purpose and infrastructure. Work to develop a collective imagination that is focused on a comprehensive greenway system for the City of Detroit. We strive to foster a collective commitment to the work of planning and building non-motorized connections between all sectors of the City.

Feature photo of the Dequindre Cut courtesy of the Michigan Dept. of Natural Resources.