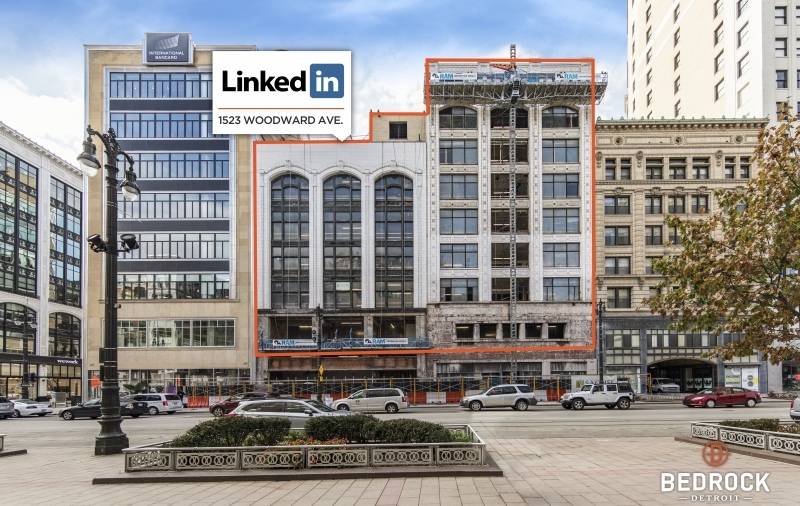 In August of 2017, the major social media site LinkedIn announced that they would be opening their first new U.S office in a decade, and that it would be in Detroit, Michigan.

In October of 2017, with 13 employees on board, they moved into a temporary space. Fast forward five months and their Detroit team has grown to nearly 40 employees.

Now, on April 27, 2018, LinkedIn announced that they signed a lease on the historic Sanders Building at 1523 Woodward Ave. The structure was purchased by Dan Gilbert‘s Bedrock Detroit redevelopment company in 2016.

The Sanders building originally housed the Sanders chocolate and candy store. The most recent tenant was Banks Bail Bonds, but it had mostly been vacant, prior to Gilbert’s purchase and renovation of it.

With some 74,500 square feet of space, the Sanders building gives them plenty of room for future growth, and the location enables to firm yo become part of the lower Woodward corridor community in the heart of downtown. Renovations are underway and we look forward to moving into the new space within the next year.

LinkedIn says that their growing Detroit team is passionate about creating economic opportunity. Since opening their temporary office in October, they’ve committed to making a positive impact in the community and have hosted numerous events on topics including professional branding, non-profit engagement, and LinkedIn workshops.

Each of LinkedIn’s offices around the globe partners with one local non-profit partner to help close the opportunity gap in their local community. For instance, their Detroit team will be working closely with the Midnight Golf Program (MGP) to help local youth get a strong start on their professional journeys.

Note: The Detroit LinkedIn office is currently hiring, so if you’re in the Detroit area—or know someone there who’s looking for a new opportunity—now’s the time to act.