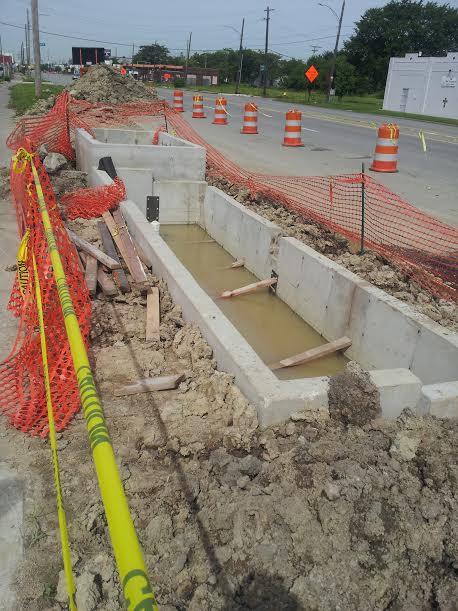 When Metro Detroit, Michigan got hit by an unprecedented rainstorm last August, it unleashed massive flooding — and an estimated ten billion gallons of raw sewage — into the region’s waterways.

That was an extreme event. But those types of downpours are happening more and more, and for decades Detroit’s aging water system has dealt with sewage overflows.

The traditional fixes are expensive. But a couple experiments are underway that could help ease the problem.

The new bioswale being constructed in the photo above is the first in Detroit. But it’s just one of a number of so-called “green infrastructure” projects scattered around this part of the city.

But green infrastructure can also look like the lot right next to the bioswale. It’s growing pennycress, a biodiesel feedstock. Replacing any hard, non-absorbent surface with something more permeable in this way can in itself be green infrastructure.

“…what makes these things so sublime, is that this allows us in Detroit to transform one of our largest liabilities into a huge asset,” says Dan Kinkead, acting director of the Detroit Future City Implementation Office.