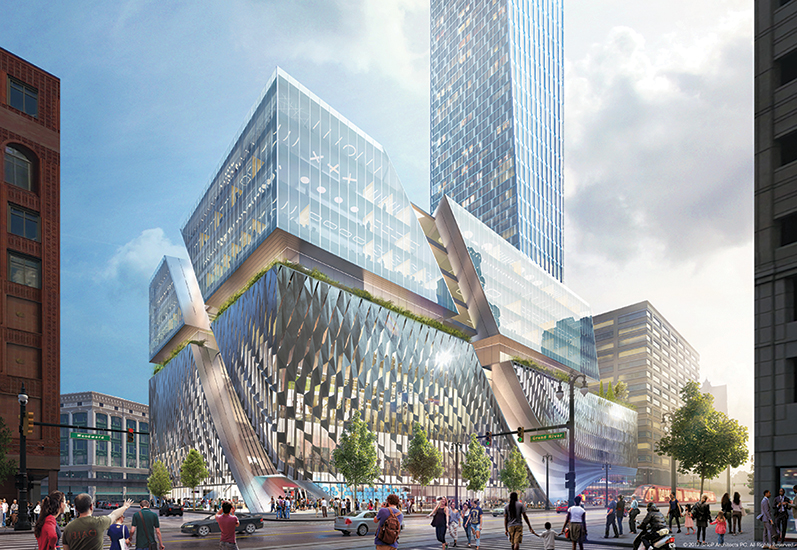 Today, less than three years after Detroit, Michigan emerged from bankruptcy, the mood is upbeat. “There’s great optimism, within certain areas,” said architect Lorcan O’Herlihy, of Los Angeles, who is working on four projects in Detroit and recently opened an office there. “People are really looking to the future.”

There are cranes and construction crews all over downtown, and in pockets elsewhere, and much more development is on the way. “In the last three to five years, there has been a lot of progress,” said Sue Mosey, executive director of Midtown Detroit, a nonprofit that promotes economic development in a neighborhood where key medical, cultural, and educational institutions are based. Midtown now is so desirable that students and many urban pioneers can no longer afford to live there.

Yet there is a disconnect between the rush to build the future in certain parts of the city and the reality faced by many Detroiters who live in crumbling neighborhoods, among the vacant houses and weed-filled lots, beyond the reach of gentrification. As Thomas J. Sugrue, author of The Origins of the Urban Crisis: Race and Inequality in Postwar Detroit, wrote in a new preface to his award-winning history, “It will take more than a few thousand hipsters or white urban professionals . . . to revitalize a sprawling, mostly African- American, working-class city of 700,000.”

Nonetheless, revitalization rushes onward, creating abundant opportunities for architects and designers. Last month, Dan Gilbert’s development company unveiled a scheme for what will be the tallest building in the city. Another huge downtown project, this one nearing completion, is an arena close to the city’s two other stadia, Ford Field and Comerica Park. Meanwhile, ground has been broken for the biggest new multi-unit housing development in Detroit since Mies van der Rohe designed the still-sublime Lafayette Park, in the late 1950s and early ’60s.

But the most appealing designs in Detroit these days are often some much smaller transformations, ones that fearlessly, and inexpensively, deploy the simplest materials and forms in inventive ways. 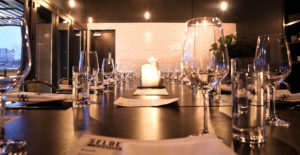 One example is one of the city’s best new restaurants, the Selden Standard, located in a repurposed laundromat.

The restaurant was designed by Tadd Heidgerken and Kristen Dean at Et Al Collaborative. The furniture and millwork is by Kevin Kuza of Box Design and additional metalwork and fabrication by Taru Lahti.

Another  example of a smaller revitalization project is True North, a building in the form of the Quonset hut that will become a playful live-work enclave aimed at creative tenants.

The project is located just South-West of the Grand River and Warren intersection. Spaces are optimized to be Live/Work studios: painting, ceramics, yoga, architecture, design, cooking, law, accounting, beyond. It boasts community gardens for vegetables and flowers. Spartan exercise equipment is provided within community spaces.