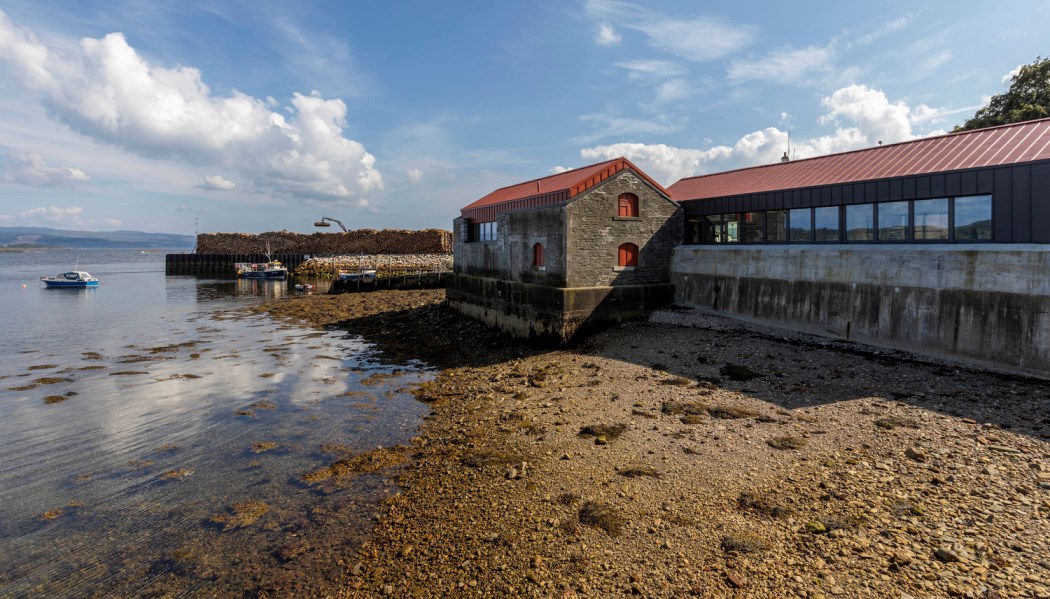 In the west of Scotland, Ardrishaig is a village of about 1300 people on the shores of Loch Fyne at the eastern entrance to the Crinan Canal in Argyll and Bute. 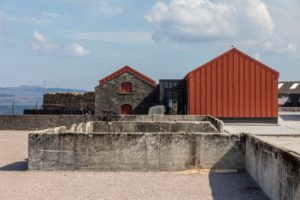 It has a pier, a lighthouse, a couple of public houses, antiques shops and hotels.

In the 1970s, urban planners devitalized the village when they demolished a row of historic old houses and shops on the lochside of the main street to make way for a parking lot.

Local shoppers and visitors alike abandoned the devastated town center and shopped instead in the neighboring town of Lochgilphead.

One of the recent attempts to revitalize Ardrishaig by restoring what’s left of their heritage involves what’s known locally as the Egg Shed, which was renovated in 2019 by Edinburgh-based Oliver Chapman Architects. 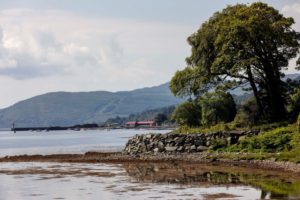 The Egg Shed provides space for heritage interpretation, retail and community use at the east end of the Crinan Canal in Ardrishaig.

Named after the building’s former use for transit storage of eggs, the existing structure has been retained and creatively reused, within a challenging site, providing a historical springboard from which the design of the renewed building took shape.

The Crinan Canal was opened in 1801 with the purpose of providing an easily-navigable route for boats travelling between the Firth of Clyde and the West Coast of Scotland, avoiding the arduous and often dangerous journey around the Mull of Kintyre. 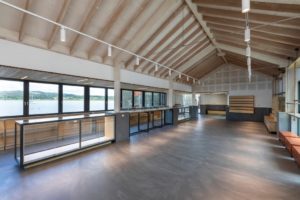 As the country’s economy developed during the industrial revolution, the Canal facilitated commercial and fishing vessels travelling between the industrial heartland around Glasgow and the West Highland villages and islands. Ardrishaig developed where the canal meets Loch Gilp, becoming a bustling port and harbour for passenger and freight traffic.

The village has since suffered an economic decline. The Egg Shed aims to help address this by providing a destination for learning about the rich heritage of the area alongside facilities for both visitors and local residents. Space is provided for a permanent exhibition on the history of the area, its natural heritage and the canal itself, with supporting retail space. 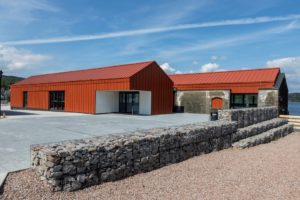 A separate volume contains a multi-purpose space for community use. Sitting adjacent to the historic heart of the village, with views over loch, harbour and working timber pier, the Egg Shed at Ardrishaig ties together the diverse strands of the area’s maritime heritage, industrial legacy and picturesque location, allowing tourism and industry to once again sit hand-in-hand

Formerly an oil storage depot, this prominent area of land on the edge of Loch Gilp had since lain as a derelict eyesore. The defunct oil tanks and other industrial apparatus were removed, just leaving the older structure dating from Ardrishaig’s days as a thriving marine transport and fishing community.

Existing openings in the walls were widened to bring views of the loch into the interior and provide a welcoming entrance to the community space.

The simple pitched-roof form of the existing building has been extended across the new structure, and new walls and roofs are clad in red steel. 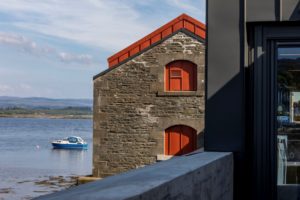 Within the footprint of the original building, the new form emerges from within the old masonry shell; a visual expression of the continuing development of the site.

The site itself is made ground reclaimed from the sea loch and this, along with the previous industrial use, meant that development was not straightforward. Large portions of the overall funding for the project were allocated to undertaking the extensive measures required to deal with the legacy of contamination, and to raise ground level across the site as protection against coastal flooding.

Flood resistant materials have been used up to a height of 1 meter above internal floor level as a further measure to ensure the longevity of the building. This datum is expressed internally as a deep concrete plinth with timber construction above.

Watch a one-minute aerial video of the site.