When it comes to deforestation, human society is in clear need of root-and-branch reform. Around 18 million hectares of forest are lost worldwide each year – an area roughly the size of Panama. Destruction of tropical rainforest, which stores 210 gigatons of carbon, is the second biggest global contributor to climate change. Meanwhile at the current rate, up to 28,000 species will go extinct in the next 25 years thanks to deforestation.

But developing countries from Ethiopia to Senegal to Pakistan are busy demonstrating how humanity can turn over a new leaf. Ethiopia – which has lost 98% of its forested areas in the last 50 years – smashed records in July 2019 when it planted an estimated 350 million trees in a single day. Pakistan’s Billion-Tree Tsunami project added 350,000 hectares of trees to the country’s landscape in just three years, while India and China – at one time Asia’s chief deforestation culprits – are leading the way in re-greening efforts, with the former planting 66 million trees in 12 hours in 2017 and the latter deploying its army to plant an Ireland-sized area of forest in 2018.

The benefits of tree planting 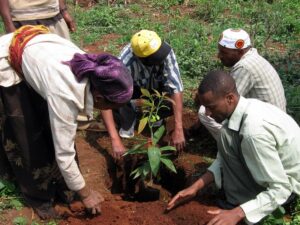 Ethiopia planted approximately 350 million trees in one day in 2019. Image: Trees For The Future/ Flickr.

The eye-catching headlines and eye-popping figures are all well and good, but what roles do these acres upon acres of extra forest play in the fight against climate change? The answer is: many. Beside sequestering carbon, boosting biodiversity and pollinators, promoting rainfall and providing firewood, fodder, jobs and shelter, forests are increasingly being recognized for the crucial infrastructure tasks they perform.

Senegal’s mangrove swamps are a case in point. The west African nation is home to some 185,000 hectares of mangrove swamps, but around 45,000 have been lost since the 1970s due to drought and deforestation. To combat this, a public- and private-funded effort run by the environment agency Océanium has seen 100,000 people from 350 villages perform a mass-planting scheme which has replaced a total of 79 million trees.

Fully functioning mangrove ecosystems are vital to Senegal’s health – both economic and otherwise. Not only will the extra tidal forest provide a habitat for a cornucopia of species, and sequester 500,000 tonnes of carbon over 20 years, it will maintain water quality, prevent soil erosion and protect crucial arable land from floods and high winds.

Natural infrastructure responses to climate change – known as ecosystem-based adaptation (EbA) – are increasingly finding favor as an alternative to human-engineered “grey” infrastructure, which relies on concrete and steel, two of the most environmentally destructive materials on the planet.

In the Mexican city of Xalapa in the state of Veracruz, rampant urban expansion has eaten away at the mountainous cloud forest that provides 30% of the city’s water supply, as well as vital support for the local economy, while the loss of trees has made the slopes more prone to landslides and flooding. In its bid to reverse the damage, Xalapa has become the first Latin-American city to make systematic use of EbA. The CityAdapt project is working to restore and protect large areas of the city’s cloud forest – opting for green protection in place of costly concrete flood defenses.

Alpine forests in Switzerland and Austria perform similar roles in screening settlements. Known as ‘protection forests’, these areas of woodland shield human habitations from natural hazards such as rockfalls, avalanches, floods and debris – and are increasingly considered the equal of engineered architecture in efficacy. Roughly half of Swiss forests currently protect towns, roads or railway lines from avalanches or rock slides. Fallen snow is more stable in forested areas because snow catches in treetops rather than accumulating on the ground, while tree cover stabilizes wind conditions and temperatures, and trunks provide a bulwark against slippage.

At the opposite end of the temperature scale, meanwhile, a suburb of Sydney in Australia has demonstrated the value of trees in sheltering citizens from sweltering summer temperatures. Scientists discovered that two streets only a kilometre apart have measurably different microclimates, with ground-level temperatures that vary by as much as 10 degrees. The key difference? Percentage of tree cover. Uncovered concrete surfaces absorb heat energy, even retaining it after the sun goes down in a phenomenon known as the urban heat island effect. These night temperatures can lead to everything from elevated energy demands to spikes in heat-related casualties. In the US alone, heat-related deaths number 1,000 a year. The vast majority of them occur in urban areas.

Favoring green over grey infrastructure clearly makes ecological sense but it also make economic sense. In 2012, New York City compared two projects to manage stormwater flows – one a green infrastructure plan that involved green roofs and bioswales – the other an off-the-shelf grey infrastructure project deploying tunnels and storm drains. The green option offered cost savings of more than $1.5 billion, without any reduction in efficacy. These findings have been replicated numerous times, demonstrating that EbA has a vital role to play as we work to refine our responses to climate change and meet the SDGs. Insurance companies protecting coastal fishing communities or other vulnerable industries, it has been speculated, might even be tempted to foot the bill for green improvements themselves, to offset the future costs of extreme weather disruption.

Not all of the benefits of restored ecosystems, however, can be measured in data terms. To stress the economic value of healthy forests is to compound the error that has enslaved the natural world to human productivity. Time in wild nature, according to the Wildlife Trust, is “fundamentally important for our health, well-being and happiness”. Research shows that regular contact with the natural world improves rates of happiness and self-esteem. Children felt that nature taught them how to take risks and made them more creative, while spending time in greenery is shown to have a positive impact on conditions from ADHD to depression.

Yet even this doesn’t tell the full story. Our appreciation of the value of green spaces won’t be complete until we recognize nature’s right to exist in and of itself, and cease to see the environment as a means to human ends.

Whatever our approach to ecosystem restoration in future, it is obvious we need to proceed at scale. Only through mass restoration and reforestation schemes – of the kind pioneered by Ethiopia, Pakistan, Senegal and the world’s less developed nations – can we hope to reverse the dismal depletion that for too long has characterized humanity’s relationship with the green world, to its detriment and our own.

The ideas presented in this article aim to inspire adaptation action – they are the views of the author and do not necessarily reflect those of the Global Center on Adaptation.

Photo of Xalapa by Alberto Rivera from Pixabay.

This article by Peter Beech originally appeared on the website of the Global Center For Adaptation. Reprinted here (with minor edits) by permission.