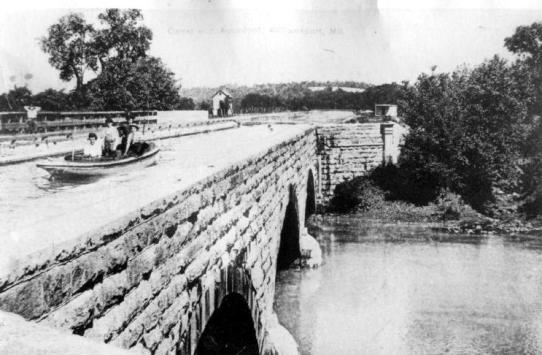 In the not-too-distant future, we may be able to see canal boats passing through a water-filled aqueduct over Conococheague Creek, thanks to $8.9 million in funding commitments from the state of Maryland and the National Park Service.

The Conococheague Creek Aqueduct is a three arch, 210-foot aqueduct and the first on the Canal that was built in a sizable town, though it was fifth of eleven aqueducts on the Canal.

Completed in September 1834 but unusable until April 1835, the aqueduct was a little lavish – with a few embellishments and stone brought from High Rock Quarry.

In 1861, Union troops destroyed the Conococheague Aqueduct to prevent Confederates from escaping through Williamsport, Maryland after the battle of Antietam. Luckily, the solid construction of the canal works emerged intact.

But in 1863, Confederates succeeded in destroying the aqueduct, though it was rebuilt within the month. The berm wall collapsed several more times, though the most famous came when Captain Frank Myers‘ Boat No. 73 hit the wall of the aqueduct, and instead of repairing it, the Canal company rebuilt it with wood.

When Captain Myers crashed his cargo boat through the wall of the aqueduct Williamsport on April 20, 1920, he probably never imagined it would lead to what’s going on there today along the historic Chesapeake & Ohio Canal.

After Myers’s boat tumbled into Conococheague Creek below, the craft laid in the water for years, and some of the limestone from the aqueduct’s walls were never retrieved from the creek. 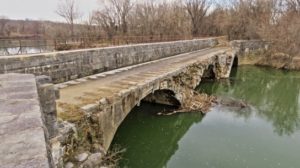 That became an issue when Corman Construction of Annapolis Junction, Maryland, started an $8.9 million project over the summer to renovate the approximately 210-foot aqueduct.

So what’s a contractor to do when stones are in the way in the creek? Dive for them.

Since the beginning of September 2017, a dive team has been plunging to the bottom of the Conococheague to prepare the stones to be lifted out of the water.

The National Park Service allocated $1,330,000 for C&O Canal National Historical Park to rehabilitate the Conococheague Aqueduct. The state of Maryland matched the NPS funding with $7,570,000 from the Bikeways Program, the Transportation Alternatives Program, and State Bond Bills.

“Enhancements to the C&O Canal National Historic Park in Williamsport are exciting on many levels,” said Dan Spedden, President of the Hagerstown-Washington County Convention and Visitors Bureau, “The Town of Williamsport and the National Park Service are combining their efforts to preserve our history and heritage, provide an outlet for exploration and recreation, and improving the town’s economy through increased visitation and visitor spending. Visit Hagerstown is preparing to promote and advertise Williamsport, Maryland as a first rate travel destination.”

Canal builders completed the Conococheague Aqueduct in 1834. Its berm wall collapsed in 1920, while a Cumberland-bound canal boat was crossing. (NPS photo) A wooden trunk placed in the aqueduct allowed navigation to continue until the canal closed in 1924.

“C&O Canal NHP is pleased to be able to implement this project,” said C&O Canal Park superintendent Kevin Brandt. “Rehabilitation of the Conococheague Aqueduct will be the centerpiece of the restored cultural landscape in this area of the park, while also creating a premier historical attraction in Williamsport, Maryland.”

This project will rehabilitate the 196-foot long aqueduct. The aqueduct will be restored to its 1920’s appearance. Rehabilitation will include engineering, safety, and accessibility improvements to the towpath over the top of the aqueduct and a new bridge for accessing the towpath.

Maryland State Senator George Edwards, who sponsored a Maryland State Bond Bill in the 2015 session on behalf of the project remarked, “The Conococheague Aqueduct project is a great project. I am glad I was able to get some funding from the state to help out. When all is complete that is planned, Williamsport will have a tremendous attraction that will draw thousands of people. I have enjoyed working with the Officials of Williamsport and the National Park Service on this project.”

Funding for the project is provided through the NPS Centennial Challenge Program to leverage partnerships to improve visitor services, support outreach to new audiences, and reinvigorate national parks.

Williamsport Mayor James G. McCleaf remarked, “This project exemplifies what’s possible when federal, state, and local officials work together towards a common goal. For the Town of Williamsport, this is job creation, revitalization, and historic preservation. We are looking forward to what this project will bring to our town.”

Congress provided $15 million for the Centennial Challenge projects, which will be matched by almost $33 million from more than 90 park partners. The 69 projects total almost $48 million and are located at 63 parks in 38 states, the District of Columbia, and the U.S. Virgin Islands.

“This project will support economic development in the state by enhancing Maryland’s attractiveness as a cycling and tourism destination,” said Maryland Transportation Secretary Pete K. Rahn.

Featured historic photo of the Conococheague Aqueduct courtesy of the National Park Service.