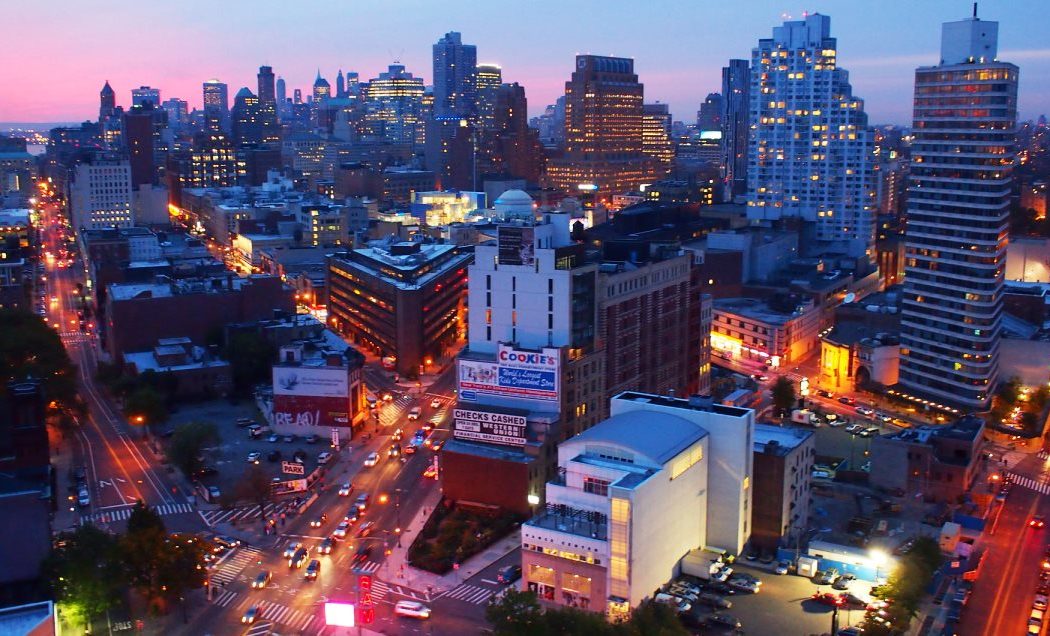 On December 18, 2019, the Downtown Brooklyn Partnership (DBP) unveiled a revitalizing new vision for the public realm in Downtown Brooklyn that will reorient its streets toward pedestrian use, and create a greener, more sustainable, and vibrant downtown.

Regina Myer, President of the Downtown Brooklyn Partnership, said, “Downtown Brooklyn has transformed into a true mixed-use community over the last 15 years, and with its population set to double in the next decade, now is the moment for a bold public realm vision that’s far more welcoming to pedestrians – from its streets to its plazas and parks. We want to go further than any business district in the city by reorienting streets away from cars and toward pedestrian, cyclist, and mass transit use. We want to breathe new life into our public spaces. And we want to create an identity worthy of Brooklyn’s Downtown. As we continue with stakeholder meetings and design refinements in 2020, we look forward to working with the community and city and state agencies to implement our vision for Downtown Brooklyn – and setting a model for other cities in the process.”

On the heels of the New York City Department of Transportation’s successful 14th Street busway rollout in Manhattan, the new Public Realm Action Plan lays out a cohesive vision and series of strategies beyond what any central business district in the city has attempted: to pedestrianize the road network, boost safety for cyclists, and improve bus efficiency. Finally, the plan is geared around establishing a sense of place and strengthening Downtown Brooklyn’s identity in its business and shopping district.

Today, Downtown Brooklyn faces a number of physical challenges: from disorienting street grid connections and inactive streets at night, to congestion, gaps in the bike network, and a lack of green and open spaces.

The revitalization plan tackles these longstanding issues head-on by reorienting streets away from car use, recommending changes to the bus network that mitigate prevalent stand-still bus traffic, and implementing a number of signature public realm interventions at key locations. In addition, the plan seeks to increase the area’s tree canopy and green infrastructure.

“We are excited to be part of regenerating Downtown Brooklyn, a neighborhood many of us call home. Working closely with DBP, WXY and the wider local community, we look forward to creating a greener, safer and bolder Downtown – our proposal paints the already lively character of the neighborhood with a distinct color palette and new public furniture collections. Brooklynites can enjoy a cohesive streetscape experience, one with improved walkability, pedestrian and cyclist safety, double the greenery and new art beacons,” said Bjarke Ingels, Founding Partner & Creative Director, BIG. “We look forward to re-animating neighborhood’s public realm, reclaiming the spaces between the buildings and creating an engaging and green environment for everyone to enjoy.”

This new vision for Downtown Brooklyn will not only reshape its public realm to accommodate recent growth, but it will also position the district for the next decade as its residential population is projected to double. While the city has invested in the arterial streets (Adams, Flatbush, Fulton), the core of Downtown Brooklyn is lacking a coherent vision and has not been the subject of any comprehensive study or reinvested in despite the significant population and economic growth. Most notably, thoroughfares that are undergoing significant change in usage and character, such as Willoughby, Livingston, and Schermerhorn Streets, and cross streets such Gallatin Place and Red Hook Lane, are in dire need of attention. This plan provides a much-needed template for future planning.

The Public Realm Action Plan is part of DBP’s overall mission of improving the public realm in the Downtown area, and comes as work continues DBP’s Brooklyn Strand public space plan, which calls for creating connections and public spaces all the way down to the river and north to Commodore Barry Park, by the Brooklyn Navy Yard. DBP is currently working with the State and Borough President Eric L. Adams on implementing key elements of the Brooklyn Strand plan using a $10M grant under the State’s Downtown Revitalization Initiative.