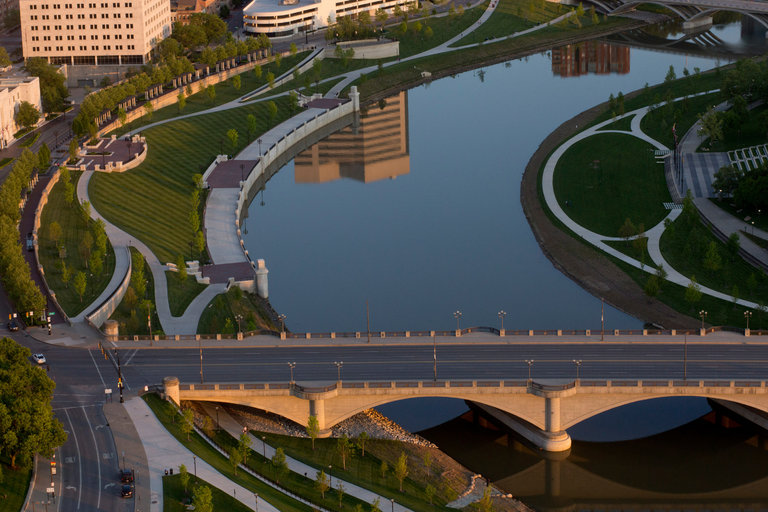 In May of 2016 the Arshot Investment Corporation became the latest developer to embrace the formula that Columbus, Ohio has embraced for its future. The company announced its plan for Millennial Tower, a 25-story, $90 million, 400,000-square foot mixed-use development that includes 180,000 square feet of office space, 40,000 square feet of retail space and 100 apartments.

Millennial Tower will be a short walk from the $25 million, 9-acre Columbus Commons park, which was completed in 2011 on the site of a former shopping mall. The tower will also be one block from the city’s Scioto Mile, a $44 million revitalization of the river’s eastern shoreline into a promenade and park. It was created by shrinking a 5-lane riverfront boulevard to 3 lanes, and was completed in 2015.

Within a few blocks of the coming tower are five other buildings that are under construction or just opened, totaling $241 million in private investment to construct 275,000 square feet of office space, about 800 residential units and 80,000 square feet of retail space.

Preceding these changes was a challenging campaign for local lawmakers, who persuaded Columbus residents during the recession in 2009 to approve a city income tax increase to 2.5 percent, from 2 percent. Their decisions have paid off, attracting developers into privately financing the replacement of cracked asphalt of parking lots with nearly $350 million in new and renovated market-rate buildings that house thousands of downtown residents, and helped generate 1,000 jobs.

“We knew we needed to build the amenities to attract privately financed development,” said Guy V. Worley, chief executive of the Columbus Downtown Development Corporation. “We had a lot of help from our major businesses here, which wrote seven- and eight-figure checks. At the same time, the public investment has been substantial.”

The city then focused on the river itself, listless and muddy. In 2013, the city removed the Main Street Dam, which was completed in 1918 to control flooding but also doubled to 600 feet the distance between the river’s banks. With the dam out of the way, and with the help of dredges to remove sediments, the river narrowed to 300 feet, and the city gained 33 acres of once-submerged shoreline that opened as the $36 million Scioto Greenways park last year.

UPDATE: On June 23, 2016, Columbus officially became the U.S. Department of Transportation’s Smart City. Columbus beat out six other finalists for the competition to receive $50 million in grant funding from the federal government and Vulcan Inc. to develop Columbus into the nation’s proving ground for intelligent transportation systems.

That means that, soon, driver-less vehicles will roam parts of Columbus, access to electric vehicle charging stations will incease and and more cars will be able to communicate with traffic signals and other transportation infrastructure.

“We stand ready to help transform Columbus, the city where I grew up, with bold transportation solutions and to inspire other smart cities around the country to do the same,” Representative Pat Tiberi said in a statement.