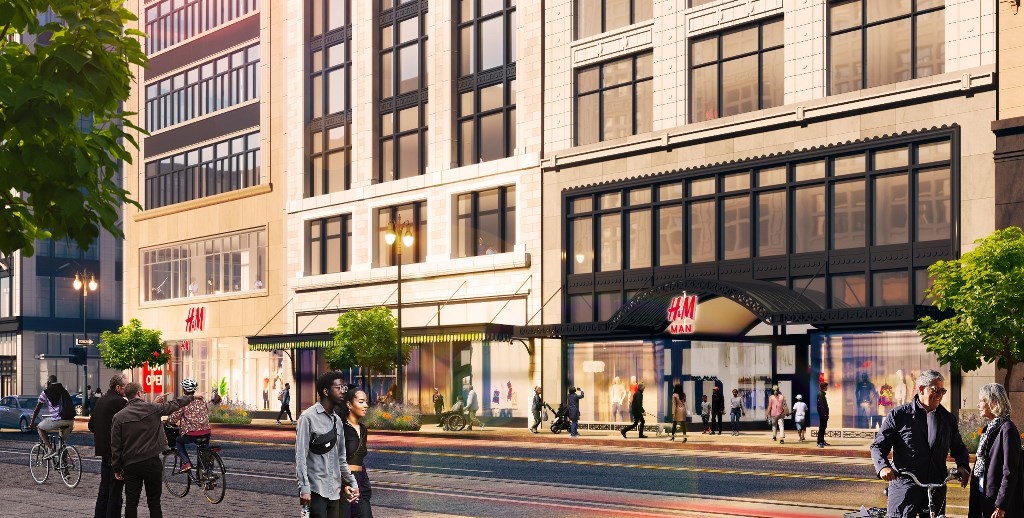 For the first time in decades, a shop that offers men’s, women’s and children’s apparel in one location, will return to Detroit, Michigan‘s downtown Woodward corridor; the same district that generations of Detroit families frequented for their shopping needs.

H&M (Hennes & Mauritz Inc.) has signed a lease with Bedrock for its first ever Detroit location with plans to open in Fall 2019. The company was founded in Sweden in 1947 and is quoted on Nasdaq Stockholm. In addition to H&M, the group includes the brands & Other Stories, Cheap Monday, COS, Monki and Weekday, as well as H&M Home. The H&M group has with some 161,000 employees and over 4300 stores in 66 markets, including franchises. In 2016, sales were about 223 billion Swedish kroner. 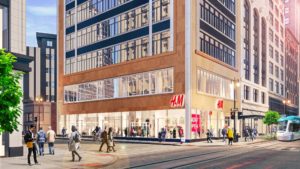 H&M will become the largest retailer in Bedrock’s portfolio, located in a 25,000 square-foot space spanning three historic, Albert Kahn-designed buildings on the west side of Woodward between John R. and Park Ave./Witherell St.

“When we started work on the former site of the JL Hudson’s department store approximately one year ago, stories from the public poured in about memories of shopping along Woodward Avenue,” said Dan Gilbert, Bedrock Founder and Chairman.

“H&M is one of those flagship retail stores that will take the Woodward Avenue shops to another level. We are hopeful that new memories and experiences will be formed once again along Woodward Avenue. H&M is opening a major Detroit store because it is good for their business. Retailers, tech startups, industrial companies, and people old and young are to choosing to stay in Detroit and coming from all over because the Motor City is where the opportunities are abundant. It is an exciting time in Detroit and H&M will only add to the unparalleled momentum,” he added.

Bedrock has acquired more than 700,000 square feet of retail space in downtown Detroit since its founding in 2011, much of which has been fully restored within historic structures. In the years since, Bedrock has welcomed dozens of local and national retailers to its eclectic portfolio, in which local businesses are thriving next door to some of the nation’s more successful brands.

Three transformational developments are currently underway just blocks from the future H&M store that will add a total of more than 275,000 square feet of prime retail space to the Central Business District. Retail spaces in the Book Tower, Monroe Blocks and the Hudson’s Site developments are designed to attract a mix of local and national brands unmatched in the region, while providing Detroiters with access to much needed neighborhood services.

Bedrock is committed to ensuring downtown Detroit offers opportunities for businesses of all sizes and entrepreneurs of all backgrounds. In 2017, the Downtown Detroit Markets were launched. This initiative activates urban public spaces with seasonal, short term leases to local shops at very affordable rates. Since the program’s inception, more than 100 small businesses seized the opportunity to market and sell their products and learn best practices.

The historic Woodward shopping district was once home to Detroit’s most prominent department stores, such as JL Hudson’s (once the world’s tallest department store), Himelhoch’s, Kern’s, B. Siegel, and others.

The three landmark buildings that H&M will inhabit at 1505, 1515 and 1529 Woodward were all designed by prolific Detroit architect Albert Kahn. 1505 Woodward has roots in the fashion industry, as it was once home to the Richman Brothers Co., a men’s haberdashery. The building has undergone significant renovations and is now home to offices of International Bancard and Rocket Fiber.

The facades at 1515 and 1529 Woodward recently underwent complete restorations and were once home to the Grinnell Bros. music store and the Sanders candy store respectively.

Detroit-based Bedrock is a full-service real estate firm specializing in acquiring, developing, leasing, financing, and managing commercial and residential buildings. Since its founding in 2011, Bedrock and its affiliates have invested and committed more than $5.6 billion to acquiring and developing more than 100 properties, including new construction of ground up developments in downtown Detroit and Cleveland totaling more than 18 million square feet.

Bedrock’s real estate portfolio consists of more than 330 office and retail tenants in Detroit’s technology-centric downtown, the majority of which are new to the market including Microsoft, Quicken Loans, LinkedIn, StockX, Ally Bank’s national headquarters, Fifth Third Bank’s regional headquarters, WeWork and many others.

Bedrock is currently developing four downtown Detroit transformational projects. In late 2017, Bedrock broke ground on the site of the historic JL Hudson’s department store. In late 2018, the Monroe Blocks redevelopment broke ground. The renovation of the classic Book Tower is well underway, and the One Campus Martius addition is expected to be completed by 2020. Together, these projects will bring close to 2 million square feet of office, retail, event and residential space to the market.

The world’s first Shinola Hotel, a partnership between Bedrock and the Detroit-based watch and leather goods manufacturer Shinola, opened on Woodward Avenue in 2019, establishing a hospitality experience original to Detroit. Home to local small businesses and a dining portfolio by award-winning chef Andrew Carmellini, Shinola Hotel was designed to be Detroit’s new living room.

Bedrock and its affiliates have invested in significant public art installations such as The Belt alley, which represents dozens of international and local artists; The Z Deck, which transformed a parking garage into a gallery experience with nearly 30 original murals; a public sculpture by KAWS; the largest mural of Charles McGee’s career, one of Detroit’s most celebrated artists; Mirage, an interactive installation by renowned artist Doug Aitken in the former State Savings Bank Building; a two-story painting by Kelsey Brooks, an artist known for visual representations of scientific formulas; along with dozens of other art-centric collaborations.

Placemaking initiatives are also priorities of Bedrock’s larger real estate strategy. The biannual Downtown Detroit Markets program allows dozens of local entrepreneurs to test market their retail concepts each year, while partnerships with local, national and international artists have helped put Detroit on the map as a can’t-miss cultural destination.

Additional placemaking initiatives include a seasonal beach in Campus Martius Park; an ice-skating rink every winter; “The Beach Detroit” ball pit by Snarkitecture; “Rainbow City Roller Rink” by Friends With You; public basketball courts and other activities in Cadillac Square each summer; and many other derelict space activations.

Additionally, Bedrock helps create jobs by investing in job training. Over the last year, the company has invested in both the Randolph Technical Center and the Breithaupt Career and Technical Center in Detroit to build a pipeline of talent for Detroit’s growing economy.