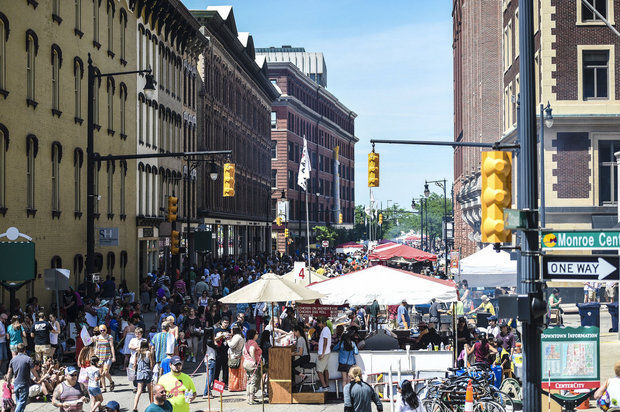 Fifty years ago, Petula Clark‘s Grammy-winning hit, “Downtown,” extolled the virtues of bustling, walkable urban cores. “Just listen to the music of the traffic in the city,” she sang. “Linger on the sidewalk where the neon signs are pretty. How can you lose?”

But downtowns were the big losers in the decades that followed as businesses and residents fled for the serenity and security of the suburbs.

That trend was particularly acute in Michigan where the urban centers of Detroit, Flint, Pontiac, Saginaw, Benton Harbor, Grand Rapids, and others became virtual ghost towns.

But downtowns are making a stunning comeback.

“Today there isn’t a vacancy any place in downtown,” Grand Rapids Mayor George Heartwell said in a promotional video for the Michigan Economic Development Corp. “There’s a vibrant scene at night downtown. Everybody doesn’t simply flee to the suburbs. In fact, the suburbs are coming into the city.”

The rebirths of downtown Grand Rapids and Detroit are getting widespread media attention. But even downtowns in such cities as Flint, Saginaw and Bay City are seeing significant investments.

Today’s downtowns are an eclectic mix of retail stores, restaurants, craft breweries, entertainment venues, offices and, most important, people living there in apartments, condos and lofts.

The resurgence of downtowns is a remarkable occurrence.

But a 20-page Michigan House action plan for the 2015-2016 fiscal year ignores urban development issues, such as mass transit.

Tackling these matters will be crucial to the state’s economic future.