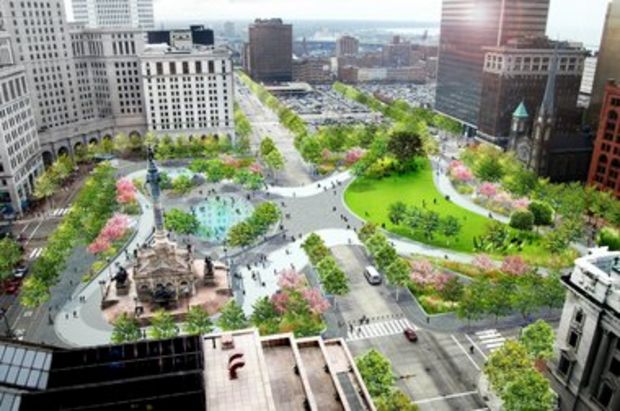 The creation of more participatory and livable urban spaces is becoming a strong global trend. There is no lack of stories from cities around the world highlighting innovative and collaborative projects about every aspect of urban life: housing, public safety, architecture and design, transportation, and the overall economy (just to mention a few).

Even most US megacities are discovering new ways to put in action the old concept-practice of a city as a common good. In some case this means a strong push for reclaiming the local Public Square – going well beyond the general idea of a just place where you pass through to reach somewhere else.

The most recent example is Cleveland, Ohio, whose City Councilors intend to revive the original project of its founder. When Moses Cleaveland laid down the town in 1796, he imagined a central open air as a New England-style commons.

Unfortunately very soon roads and traffic took over, steadily intruding on its civic purpose. It became a typical transit hub. Until recent years, when “it just turned into more like a series of big traffic islands”, says the landscape architect James Corner.

He is now in charge of re-transforming the original Cleveland’s Public Square, partly based on the New York’s High Line Park famously designed by Corner in 2006.

This re-appropriation of the city center as a commons happening now in Cleveland mirrors similar projects in San Francisco, Seattle, Memphis, and Chicago, all centered upon James Corner’s “revivalist” approach. A context based on the central idea and practice of a public square that becomes a city centerpiece and where “democracy plays out”.